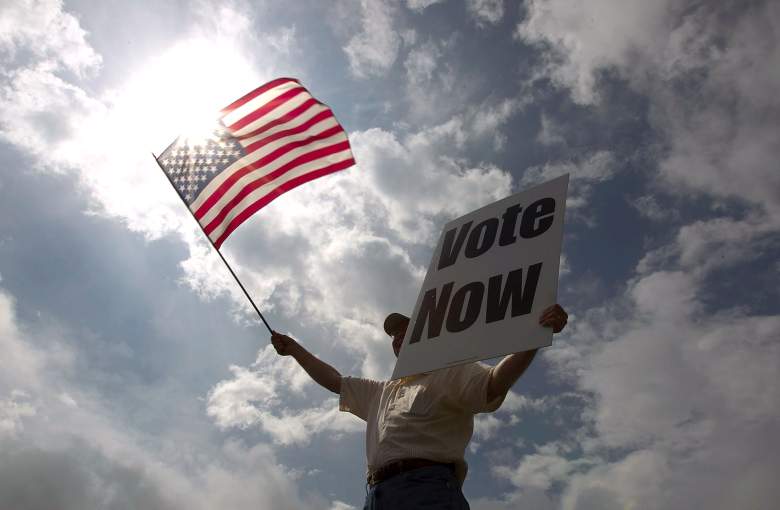 JayDanny Cooper urges Alabama residents to vote in the primary along the side of a highway March 13, 2012 in Birmingham, Alabama. (Getty)

Alabama voters have a handful of options when they cast their votes for president Tuesday.

Although the presidential race is the headliner, the ballot also features a U.S. Senate race, and a Congressional race in each of the state’s seven districts.

POLLING HOURS & LOCATIONS: Polls in Alabama open at 7 a.m. Central Time and close at 7 p.m. Central Time. If you’re in line at your polling location by 7 p.m., and haven’t yet voted, you’ll be able to vote after 7 p.m. If you’re unsure at which precinct you’ll be voting, you can find out through the voter registration lookup tool on the Secretary of the State’s website.

REGISTRATION GUIDELINES: The voter registration deadline in Alabama was October 24, 2016. Alabama does not have same day registration. If you’re unsure whether you’re already registered, you can check your status via the state’s registration lookup tool.

TRACKING RESULTS: There are a number of ways to track results. The Secretary of State’s office will be posting results on AlabamaVotes.gov. Politico will also post state-by-state results online, you can find Alabama’s results here.

WHAT’S AT STAKE IN FEDERAL RACES: Donald Trump is favored to carry the state’s nine electoral votes. Alabama voted Republican in both the 2008 and 2012 presidential races. Republican Mitt Romney beat President Obama in the state in 2012 by 22.2 percentage points.

Richard C. Shelby, a Republican, is facing Democrat Ron Crumpton in the race for the Alabama Senate seat currently held by Shelby.

Alabama has seven members in the House of Representatives, one Democrat and six Republicans. Every House seat is up for re-election. Click here for a map of the state’s congressional districts.

Alabama House members are one of only five lower house officials in the United States that are elected every four years. Alabama’s senators serve without term limits for four-year terms. All House and Senate seats will be up for re-election in 2018.

Republican Robert Bentley has served as Governor of Alabama since 2011 and the next gubernatorial election will take place in 2018.

Read More
2016 Presidential Election, News, Politics
Follow Heavy ↓
wpDiscuz
0
0
Would love your thoughts, please comment.x
()
x
| Reply
Alabama voters will head to the polls Tuesday to cast votes for federal offices. Here's what you need to know before going to the polls.