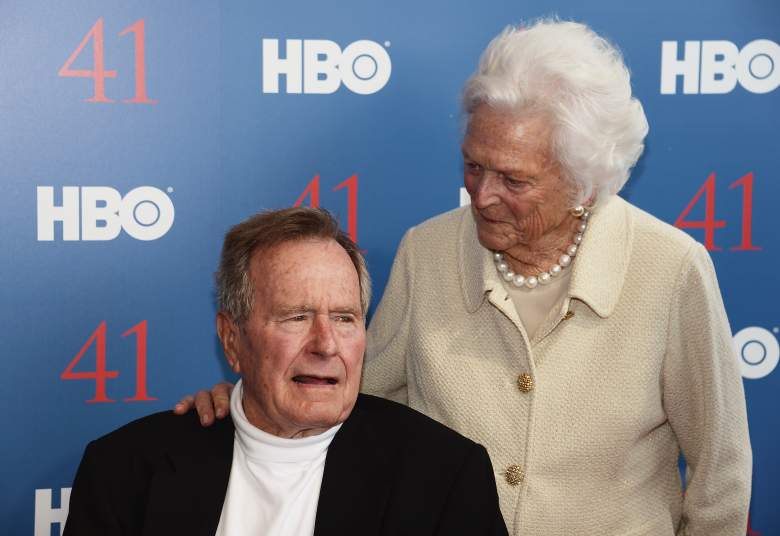 Former First Lady Barbara Bush is in failing health and has opted to seek comfort care instead of going back to the hospital. That announcement – on April 15, 2018 – by her husband’s office has prompted many people to offer prayers for the legendary matriarch.

Barbara Bush, 92, has had bouts of medical trouble in the past, when both she and her husband, the former president, were hospitalized. However, this sounds more serious. You can read the Bush statement on the First Lady’s health here:

Statement by the Office of George H. W. Bush on the health of former First Lady Barbara Bush. pic.twitter.com/4csUS6IRKZ

Following a recent series of hospitalizations, and after consulting her family and doctors, Mrs. Bush, now age 92, has decided not to seek additional medical treatment and will instead focus on comfort care. It will not surprise those who know her that Barbara Bush has been a rock in the face of her failing health, worrying not for herself – thanks to her abiding faith – but for others. She is surrounded by a family she adores, and appreciates the many kind messages and especially the prayers she is receiving.

According to the Mayo Clinic, Chronic obstructive pulmonary disease (COPD) “is a chronic inflammatory lung disease that causes obstructed airflow from the lungs. Symptoms include breathing difficulty, cough, mucus (sputum) production and wheezing.” It can lead to heart failure over time. It’s a treatable and chronic condition, but the symptoms are known to worsen over time, Mayo Clinic reports.

briefly joined her husband, former President George H.W. Bush, as a patient in a Houston hospital.

In 2017, both Barbara and George H.W. Bush were hospitalized. However, that time, Barbara was discharged from the hospital on January 23, although George remains a patient. The former president was sitting up, talking with doctors, and returning phone calls, as he continues to recover from pneumonia, a statement from the hospital said.

A statement from the Bush family spokesman on the afternoon of January 18, 2017 said: “Mrs. Bush was admitted to the Houston Methodist Hospital this morning as a precaution after experiencing fatigue and coughing.” George H.W. Bush is now in the intensive care unit.

Former President George W. Bush wrote on social media on January 19, 2017 that “your prayers are working” and both his parents were doing better and “fighting on”:

The statement, released on Twitter by spokesman Jim McGrath on January 19, 2017 had continued that President Bush was “admitted to the ICU at Houston Methodist Hospital to address an acute respiratory problem stemming from pneumonia. Doctors performed a procedure to protect and clear his airway that required sedation. President Bush is stable and resting comfortably in the ICU, where he will remain for observation.”

George H.W. and Barbara recovered enough to participate in the coin toss at Super Bowl 2017.

Barbara Bush is 92-years-old. Her husband is 93-years-old, and is the oldest living president, as he is a few months older than Jimmy Carter. The Bushes have been married for 73 years; they were married January 6, 1945.

According to U.S. News, they are the longest married presidential couple in U.S. history, trailed by John and Abigail Adams, who were married for 54 years.

George H.W. Bush, president #41, is the father of George W. Bush, and served as president from from 1989 to 1993. He is also a World War II veteran, who served as vice president under President Ronald Reagan and was director of the CIA.

The phenomenon in which partners who are closely intertwined suffer health problems in short proximity to one another has some validity in science and is known as Broken Heart Syndrome. The phenomenon recently was in the news when Hollywood icon Debbie Reynolds died right after her daughter, Carrie Fisher, although it’s hopeful that the Bushes will make a swift recovery.

George H.W. Bush displayed his sense of humor in a letter sent to Donald Trump‘s team on January 18, 2017, the same day his hospitalization was released, explaining why the 41st president will not be able to attend the inauguration of the 45th. Bush joked that his doctors told him that if he went to Washington D.C. in January, “it likely will put me six feet in the ground.”

Loading more stories
wpDiscuz
3
0
Would love your thoughts, please comment.x
()
x
| Reply
Barbara Bush was hospitalized along with her husband, former President George H.W. Bush. Both Bushes were released and did the coin toss at Super Bowl 17.