Chief Justice Roberts Flubs President Oath of OfficeSome conservative Web sites are already saying President Obama flubbed the oath of office. And it certainly wasnt smooth. But it appears it wasnt his fault, but that of Chief Justice John Roberts. This is what Roberts was supposed to ask Mr, Obama to repeat: That I will faithfully execute the office of President of…2009-01-20T18:45:01.000Z

On January 20, 2009, President Barack Obama became the first African American president. While there was plenty of celebrating that day, the most important part of it – the swearing in ceremony – didn’t go as planned. Supreme Court Chief Justice John Roberts, who Obama voted against in the Senate, and Obama tripped over each other’s words as they recited the Oath of Office.

As you can see in the above video, the two did not get off on the right foot and never had any rhythm. Here’s the correct oath, which Donald Trump will have to take on January 20, 2017:

Roberts later added the words, “So help you God,” which isn’t part of the oath. However, Presidents have said it as part of a tradition set by George Washington. Obama then said, “So help me God.”

Initially, the Obama Administration said that they didn’t think Obama needed to take the oath a second time. However, just to be safe, they decided to call Roberts to the White House on January 21, 2009 to swear in Obama again in the White House map room. There was only a small group of reporters on hand to catch the scene.

“Are you ready to take the oath?” Roberts asked Obama a second time.

“I am. And we’re going to do it very slowly,” Obama replied.

After the oath was administered, Roberts said, “Congratulations again, sir.”

We believe that the oath of office was administered effectively and that the president was sworn in appropriately yesterday,” Gregory B. Craig, the White House counsel, told the New York Times in 2009. “But the oath appears in the Constitution itself, and out of an abundance of caution, because there was one word out of sequence, Chief Justice Roberts administered the oath a second time.”

Here’s audio from the second swearing in ceremony.

Barack Obama Re-Takes Oath of Office – Audio 1/21/09Here is audio of President Barack Obama re-taking the Presidential Oath of Office on January 21, 2009. He did so as a result of a flub that took place on Inauguration Day when Chief Justice John Roberts mixed up the words of the Oath, and Obama repeated it incorrectly. Roberts again administered the Oath at…2009-01-22T15:56:55.000Z 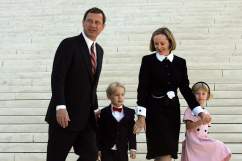