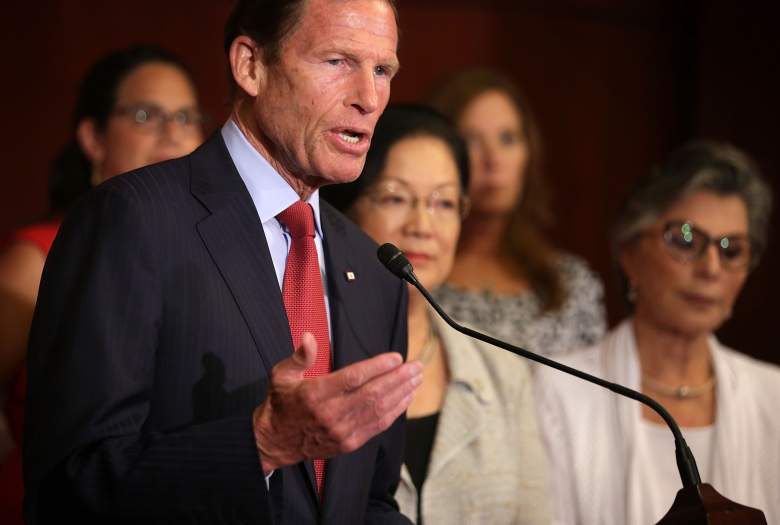 President Donald Trump frequently attacks Senator Richard Blumenthal on Twitter, saying that Blumenthal lied about his service in Vietnam. The latest tweets came on August 7th, when Trump said that Blumenthal shouldn’t be judging collusion since he “defrauded voters” with his Vietnam story.

Never in U.S.history has anyone lied or defrauded voters like Senator Richard Blumenthal. He told stories about his Vietnam battles and….

…conquests, how brave he was, and it was all a lie. He cried like a baby and begged for forgiveness like a child. Now he judges collusion?

Trump previously brought out this attack on Blumenthal in early May, when the Connecticut senator questioned Trump’s decision to fire James Comey.

Watching Senator Richard Blumenthal speak of Comey is a joke. "Richie" devised one of the greatest military frauds in U.S. history. For….

years, as a pol in Connecticut, Blumenthal would talk of his great bravery and conquests in Vietnam – except he was never there. When….

caught, he cried like a baby and begged for forgiveness…and now he is judge & jury. He should be the one who is investigated for his acts.

So what exactly does Trump refer to when he says that Blumenthal lied about Vietnam service? Here’s what you need to know.

1. The New York Times Reported in 2010 That Blumenthal Lied About Vietnam Service in a Speech 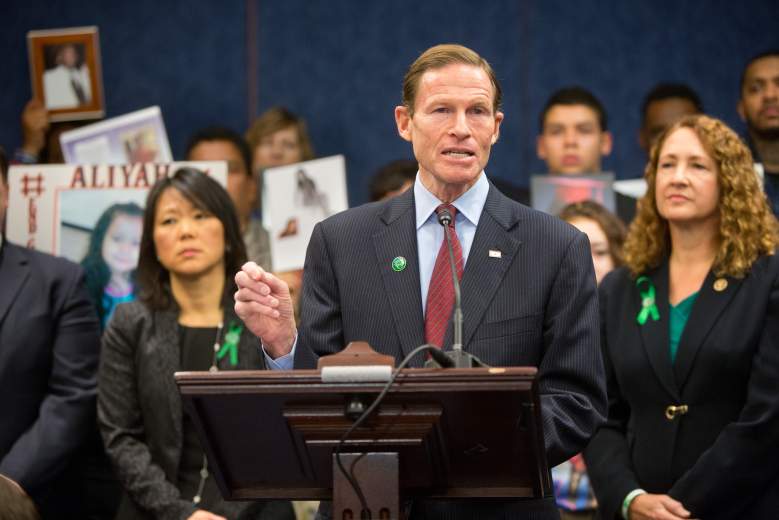 Richard Blumenthal speaks during a press conference on Capitol Hill on December 10, 2015 in Washington, D.C. (Getty)

With his tweets, President Trump is referring to a situation that unfolded during the 2010 U.S. Senate elections, when Richard Blumenthal was running against Linda McMahon. In May 2010, The New York Times reported that Blumenthal said in a 2008 speech, “We have learned something important since the days that I served in Vietnam.”

But as the Times reported, Blumenthal did not actually serve in Vietnam as he suggests there; he received five military deferments from 1965 to 1970. The Times also noted that Blumenthal took repeated steps to avoid going to Vietnam.

Blumenthal actually served in the Marine Reserve beginning in 1970, joining a unit in Washington and working on projects like fixing campgrounds and organizing toy drives. So technically he was serving while the Vietnam War was happening, but he himself did not serve in Vietnam.

“…[W]hat is striking about Mr. Blumenthal’s record is the contrast between the many steps he took that allowed him to avoid Vietnam, and the misleading way he often speaks about that period of his life now, especially when he is speaking at veterans’ ceremonies or other patriotic events,” The New York Times reported.

2. He Also Reportedly Talked in a 2003 Speech About ‘Returning Home’ From Vietnam 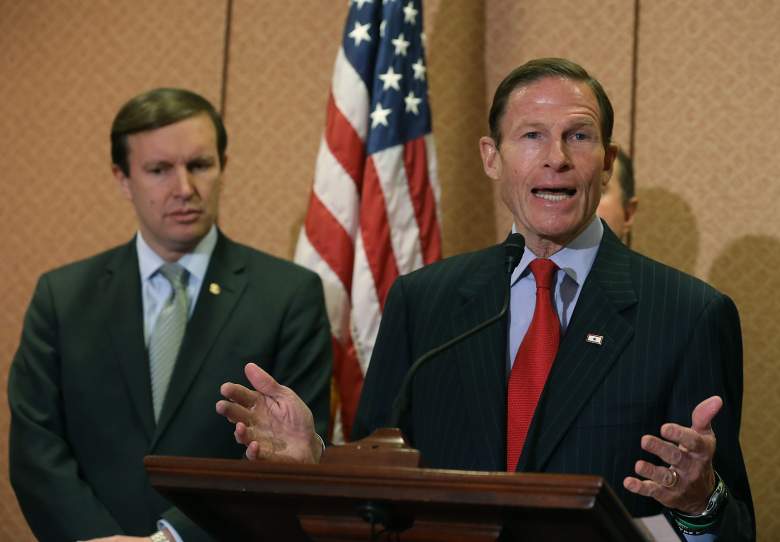 Richard Blumenthal speaks about gun safety during a news conference on Capitol Hill on January 27, 2016. (Getty)

After The New York Times ran its story, journalists and political opponents immediately began searching for other examples of Blumenthal lying about his military service.

One that came up was from 2003, when Blumenthal suggested in a speech that he was among those who “returned home” from Vietnam, according to The Day.

Later, a post on the campaign website of Linda McMahon suggested that her opposition researchers had passed along tape of Blumenthal’s 2008 speech to The New York Times, according to Politico. However, The New York Times said that they did not receive the video from McMahon.

The New York Times’ original report also refers to a speech Blumenthal gave to a crowd of military families gathered to support troops overseas. Blumenthal said, “When we returned, we saw nothing like this. Let us do better by this generation of men and women.” That clearly suggests that he includes himself among the group of troops “returning” from Vietnam, but in reality, he was never there.

3. Critics Argued the 2008 Quote Was Taken Out of Context 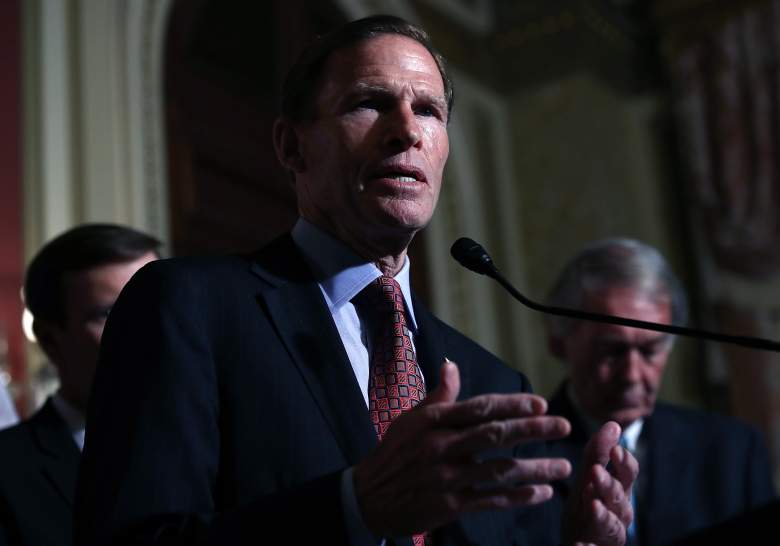 Richard Blumenthal speaks during a press conference on June 16, 2016 at the U.S. Capitol. (Getty)

After The New York Times reported on the 2008 speech, Politico reported that the article was missing some vital context: that Blumenthal had said towards the beginning of that same speech that he “served in the military during the Vietnam era in the Marine Corps,” which is an accurate characterization.

In addition, The Day reported that after viewing years of Blumenthal speeches and political debates, they found that he typically specified that his service was in the Marine Corps Reserve, and in some instances he explicitly said he did not serve in Vietnam.

On one such occasion reported by The Day, Blumenthal said during a Democratic primary debate, “Although I did not serve in Vietnam, I have seen first-hand the effects of military action.”

The statements reported on by outlets like The New York Times and The Day were certainly not truthful, then, but it’s not as if Blumenthal was trying spin an elaborate lie, as the fact that he served in the Marine Corps and not in Vietnam was something he typically mentioned in his speeches.

4. Blumenthal Said That He Misspoke on a Few Occasions 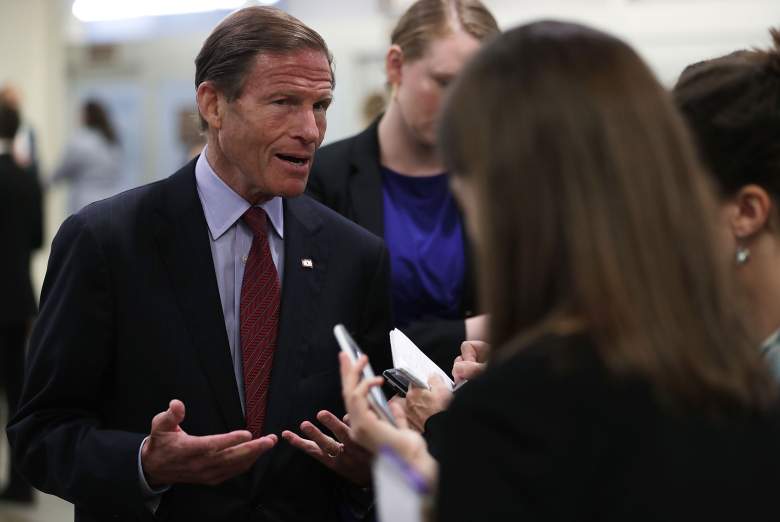 Richard Blumenthal speaks to members of the media at the Capitol on July 6, 2016. (Getty)

Blumenthal responded to the controversy by saying that he did indeed misspeak on a few occasions, but he denied that he intentionally lied about Vietnam service.

“I may have misspoken, I did misspeak on a few occasions out of hundreds that I have attended (in honor of the military)…I regret that I misspoke,” Blumenthal said during a press conference, according to Politico.

He went on to say that he was “unaware of those misplaced words when they were spoken.”

During the press conference, Blumenthal was also asked why he didn’t correct the record when news articles referred to him as serving in Vietnam. He responded, “There were a few articles, not many. I am responsible for my own statements….I can’t be responsible for all the articles, I may not even have seen them. ….sometimes journalists do make mistakes.”

5. He Took a Hit in the Polls After the Story But Still Won the Election Easily 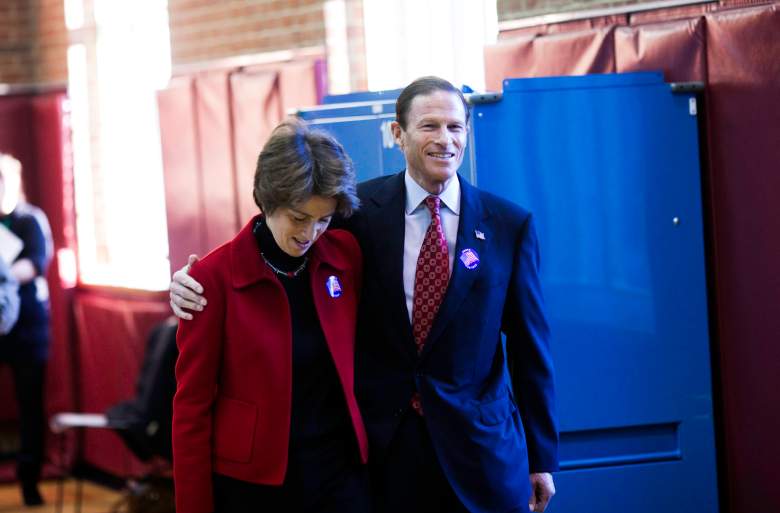 Richard Blumenthal and his wife Cynthia walk together while casting their votes at the Greenwich Civic Center November 2, 2010 in Greenwich, Connecticut. (Getty)

Richard Blumenthal had been ahead of Linda McMahon in the polls throughout much of the 2010 election cycle, but immediately after the Vietnam story broke, his lead over her began to shrink.

Still, Blumenthal was able to bounce back from the controversy and easily win the election; he was elected with 55 percent of the vote compared to Linda McMahon’s 43 percent.