Legendary comic book artist and illustrator Bernie Wrightson died on March 18 at the age of 68 after a long battle with brain cancer, his wife, Liz, announced on Facebook.

Wrightson was known for his work on horror comics, including as the co-creator of the Swamp Thing. A native of Baltimore, Maryland, Wrightson lived in Austin, Texas, with his wife, according to an obituary posted to his website. He is also survived by two sons from a previous marriage, John and Jeffrey, and a stepson, Thomas. The family said they are planning a celebration of his life later in 2017.

Wrightson was self-trained by reading comics and through a correspondence course from the Famous Artists School. He began working as an illustrator at the Baltimore Sun newspaper in 1966, and published his first professional comic work in 1968.

Wrightson and writer Len Wein co-created the Swamp Thing creature for DC in 1971.

He announced in January that he would be retiring because of his battle with cancer, posting a photo from his hospital bed on Facebook.

“We have had to come to the sad conclusion that he is now effectively retired: he will produce no new art, and he is unable to attend conventions. Should this situation change I will happily announce it here,” his wife Liz said in the announcement.

Liz Wrightson said her husband took a turn for the worse a couple months before his death:

“Last November Bernie began falling again, and having obvious problems with perception. He had to undergo yet another brain surgery to relieve bleeding, and then spend several weeks undergoing in-patient rehabilitation,” she said. “Unfortunately, it appears that he has lasting damage: he has extremely limited function on his left side, and is unable to walk or reliably use his left hand, among other limitations.” 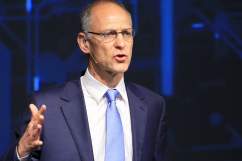 Loading more stories
wpDiscuz
0
0
Would love your thoughts, please comment.x
()
x
| Reply
Bernie Wrightson, the legendary comic book artist and illustrator, has died at the age of 68 after a battle with cancer, his family says.