Last weekend, the city of New Orleans started taking down century-old monuments honoring the Confederacy and white supremacy in general. In response, Virginia gubernatorial candidate Corey Stewart ignited a social-media firestorm with a series of tweets praising the monuments and condemning those who want the removed. Here’s five things you need to know:

1. Corey Stewart is a Native of Minnesota

Nothing is worse than a Yankee telling a Southerner that his monuments don't matter.

Early in the morning of April 24, police and construction crews gathered around the Battle of Liberty Place monument in downtown New Orleans and started taking down the 35-foot granite obelisk, which, as New Orleans mayor Mitch Landrieu said, “was originally erected to honor the members of the Crescent City White League, who revolted against the racially integrated New Orleans Police and state militias. The statue was put up to honor the killing of police officers by white supremacists. … We will no longer allow the Confederacy to literally be put on a pedestal in the heart of our city.”

In response, Stewart began posting a series of tweets on the evening of April 24, starting with “Nothing is worse than a Yankee telling a Southerner that his monuments don’t matter.”

That tweet has over 7,000 responses as of press time, the first of which came from Donte Stallworth, who in a four-tweet series asked “But weren’t you born and raised in Minnesota? And you also graduated college in Minnesota before packing up for Virginia? Speaking of your home state Minnesota, which was a Union state. A state that was critical to the Confederates defeat at Gettysburg. So critical, in fact, the Gov signed a proclamation in 2013 honoring “Minnesota Courage at Gettysburg, Recognition Day.” You’re no southerner, you are a Minnesotan. Respect your home state’s sacrifice for helping the United States win the Civil War.”

@CoreyStewartVA You're no southerner, you are a Minnesotan. Respect your home state's sacrifice for helping the United States win the Civil War.

Stewart’s own gubernatorial campaign page notes that “Corey was born in Minnesota, to a working class family…. [and] earned his law degree from William Mitchell College of Law in Saint Paul Minnesota.”

Despite Stewart’s tweeted accusation, “Yankees” did not force New Orleans to remove the Confederate monuments; Mayor Landrieu proposed their removal, and the city council voted 6-1 in favor of the proposal.

@CoreyStewartVA This is the monument in NOLA that caused your tantrum. pic.twitter.com/C2tv22IGjp

The Liberty Place Monument is the first of four pro-Confederate monuments New Orleans plans to take down. In response to the monument’s removal, Stewart released a statement on his campaign page saying, in its entirety:

“The removal of these historical monuments is nothing less than the blatant destruction of U.S. history,” Stewart said. “This is what happens when weak-chinned Republicans refuse to stand up to the tyrannical political correctness on the left.”

“Democrats in New Orleans are destroying history today, just like they’re trying to in Charlottesville. This will not stop with Robert E. Lee or P. G. T. Beauregard. Next, they will tear down statues of Washington and Jefferson.”

Despite the scare quotes Stewart or his speechwriter placed around the word “racist,” the original carving on the base of the Liberty Place monument explicitly promotes white supremacy: “United States troops took over the state government and reinstated the usurpers but the National Election November 1876 recognized white supremacy in the south and gave us our state.”

Though Stewart decried the monument’s removal as “destroying history,” New Orleans Times-Picayune columnist Jarvis Deberry argued the opposite: that the monument itself was an attempt at historical revisionism. As DeBerry wrote on April 25:

“But, believe it or not, the uncalibrated outrage, the idea that revisionism is bad in a way that oppression is not, is not the main reason the rewriting history allegation is intellectually dishonest.  It’s most intellectually dishonest because it ignores the truth that the monuments themselves are revisionist.  History was re-written when the monuments to Robert E. Lee and Jefferson Davis and P.G.T. Beauregard and the White League were erected.

It shouldn’t surprise anyone who knows history that in his speech decrying tyranny, Wallace promised to continue crushing black people into the dust…”

I will always fight to protect Virginia's Heritage and History! Retweet if you will too! #TakeBackVA #TeamCorey pic.twitter.com/mYqnUJ04A4

As part of his Confederate-monument tweetstorm, Stewart posted a campaign screenshot promising “As governor I will force Charlottesville to buy back the General Lee statue.”

Charlottesville, Virginia, is home to the University of Virginia’s main campus. In February, Charlottesville’s city council voted 3-2 to remove a statue of Confederate general Robert E. Lee from the city’s central square.

At the time, UVA professor Jalane Schmidt told Richmond.com (a news website conering Virginia’s capital city of Richmond) that “These African-American refugees of previous generations were driven from our town. They found no sanctuary city here in Charlottesville. And in the 1920s, leading white citizens’ contempt for black humanity was enshrined in Charlottesville’s public spaces …. These monuments prompted and still perpetuate a romantic false narrative of the Lost Cause, which erases the memory of the enslaved majority.”

We need to protect our history and heritage. I will fight to preserve our historical monuments. Share the word! pic.twitter.com/kyQillevuI

On the afternoon of April 25, after his Confederate-monument advocacy made national headlines, Stewart also tweeted a 13-second campaign video “Save our Virginia monuments! Vote for Corey Stewart.” All of the monuments shown in the video snippet honor the Confederacy or prominent Confederates.

4. Republicans Have Accused Stewart of Racist “Dog-Whistling” Before This

Corey Stewart’s “Ask Me Anything” introduction (screenshot from reddit)

In March, Corey Stewart participated in an “Ask Me Anything” post on Reddit introducing himself with the brief paragraph “Hey Reddit, I’m Corey Stewart. Republican Candidate for Governor of Virginia and former State Chair for Donald Trump for President. The primary election is June 13th. I am opposing the establishment’s handpicked candidate, former Bush guy, RNC chairman, and cuckservative, Ed Gillespie. I led the nation’s toughest crackdown on illegal immigration in the nation and have been attacked by the left and establishment Republicans. I need your help.”

In response, Virginia Republican activist Willie Deutsch published a blog post calling out Stewart’s use of “cuckservative,” noting that “The term is an accusation by the alt-right of being a race traitor, because supporting tolerance and diversity means weakening the power of “White Americans” (hence, cuckolding yourself). Corey Stewart is explicitly wrapping himself in White Nationalism, and accusing Ed Gillespie of insufficiently prioritizing whites over other races. For Stewart to attack a fellow Republican for not holding the white race in a position of racial supremacy is unconscionable.”

Nor was Deutsch the only Republican to criticize Stewart’s use of the term. After Stewart’s Reddit AMA, Virginia’s Republican Party Chairman John Whitbeck released a statement on the official Virginia GOP page saying “The term ‘cuckservative’ is racist and its use is not acceptable in political discourse under any circumstance. I condemn the use of the term unequivocally and without exception.  No Republican should ever use this type of language in a campaign.”

Remember, if you hear the term “cuckservative,” it is a slur against Christian voters coined by white-supremacists.

As early as July 2015, conservative commentator Erick Erickson tweeted “Remember, if you hear the term ‘cuckservative,’ it is a slur against Christian voters coined by white-supremacists.”

In that Reddit AMA, Stewart also said “CONFIRMED!” in response to the question “Can you confirm that Terry Mcalliffe [a misspelled reference to current Virginia governor Terry McAuliffe] is a cuck?”

It is very clear to everyone but the paid protestors & liberal snowflakes. Washington & Jefferson are next if we don't stop this madness. pic.twitter.com/xkaQdljX6S

As part of his tweetstorm opposing New Orleans’ removal of pro-Confederate monuments, Stewart frequently compared such actions to that of ISIS.

It appears ISIS has won. They are tearing down historical monuments in New Orleans now too. It must end. Despicable!https://t.co/hrO0cLozos

On the morning of April 24, Stewart retweeted a Fox News article “New Orleans takes down prominent Confederate monument” under his own caption: “It appears ISIS has won. They are tearing down historical monuments in New Orleans now too. It must end. Despicable!”

Later that day, he posted a Photoshopped meme comparing “ISIS in Middle-East [sic]” and “Progressives in America” [both shown toppling statues] under the caption “It is very clear to everyone but the paid protestors & liberal snowflakes. Washington & Jefferson are next if we don’t stop this madness.”

On April 25, he also posted two identical tweets six hours apart, both showing a meme claiming that “Politicians who support tearing down war memorials are like ISIS.”

Politicians who are for destroying the monuments, statues and other artifacts of history are just like ISIS. pic.twitter.com/x03K7sEk1L 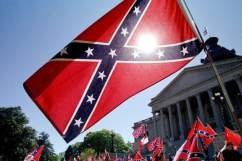