Williamson County Sheriff/Greg Goodman Marshall Grant Neely III, a high school administrator in Nashville, Tennessee, is accused of hitting a bicyclist, Tyler Noe, with his Volvo SUV and then driving off at the Natchez Trace Parkway, police say.

An administrator at a private high school in Tennessee is accused of striking a bicyclist with his SUV in a federal park and then driving off. The incident was caught on video by the victim’s friend.

Marshall Grant Neely III, 58, of Franklin, was arrested Sunday night by the Williamson County Sheriff’s Office on several charges, including felony reckless endangerment, leaving the scene of an accident, failure to immediately notify of accident and failure to render aid, authorities say.

Neely is accused of hitting 23-year-old Tyler Noe on the Natchez Trace Parkway on Saturday, July 8, knocking him from his bicycle before fleeing the scene in his Volvo SUV, the park service said on Facebook. Noe’s friend, Greg Goodman, recorded the incident with a GoPro and posted it to Facebook.

“Three hours ago this person intentionally hit my friend Tyler Noe on Natchez Trace,” Goodman posted on Facebook. “We had a witness behind us who said he has seen this same Volvo try to hit someone else last week.”

Neely works at the University School of Nashville and was previously a dean of students for its high school. Neely could also not be reached by Heavy and it is not clear if he has hired an attorney.

1. Neely Told Police a ‘Man & a Woman Were Standing in the Road & Threw the Bicycle at His Car’

You can watch the video that shows the driver, identified by police as Marshall Neely, striking Tyler Noe with his Volvo SUV, sending the 23-year-old bicyclist down to the pavement, before driving off. The video was posted to Facebook on Saturday a few hours after the incident by Noe’s friend, Greg Goodman.

In the video, a truck can be seen moving into the other lane to get around the cyclists, before the Volvo hits Noe.

According to a press release from Natchez Trace Parkway officials, the incident happened about 11 a.m. The road where Noe and Goodman were cycling is a designated bike route in the northern part of the national park, officials said.

“A black Volvo passing the bicyclists struck Noe causing serious but non-life threatening injuries. The Volvo’s driver failed to stop and left the scene. Goodman was wearing a camera and provided a video of the incident to investigators,” the press release said. “Parkway Rangers and Williamson County Sheriff’s Deputies identified Marshall Grant Neely III, 58, of Franklin, TN as the vehicle’s driver who left the scene.”

According to an arrest report obtained by Josh Breslow of WKRN-TV, which you can see above, Neely told police, “that a man and a woman were standing in the road and threw the bicycle at his car.”

Police said in the report, “Neely III did not notify law enforcement of the collision or offer assistance to the injured cyclist.”

Grant was taken into custody by the Williams County Sheriff and booked into the local detention center on state charges. Noe was taken to the hospital and treated for cuts and bruises. 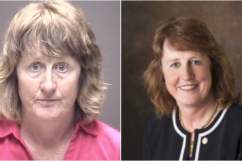 Neely has worked at the Nashville private high school since 1995.

Marshall Neely has given several interviews to local media outlets in the days after his arrest.

He told The Tennessean, “I’m a good man.” He said he has received multiple death threats. “This is like the biggest nightmare I have ever had in my life. I’m a good man.”

He also explained his incorrect statement to police.

“When the police came and asked me what happened, I said, ‘I don’t know.’ There was a guy there maybe and I remember he was standing there and I said maybe he threw his bike at me,” Neely told the newspaper on Monday “Obviously, the video shows otherwise. I did not see the man. There were things going on all over the place. If you want, go look on my car, it’s been impounded. There’s not a scratch on my car.”

He told the newspaper the video looks “not so great,” but claims it was a “quote-unquote soft hit.”

He did apologize, but also thinks he will found to be innocent.

“I’m so sorry it happened. I would never leave someone who was hurt. Thankfully, I understand he is doing fine. I feel really sorry about it, but that’s just not the kind of person I am,” Neely told the newspaper. “I think I will be found innocent because there was no malice, there was no intention, there was no awareness. I just want to be treated fairly.”

More of our interview with Marshall Neely. "I did not intend for it to happen." @NC5 pic.twitter.com/iA9car2JRE

“I’m not a bad man,” he told News Channel 5. “I feel very badly for the gentleman who collided with me and I assume we’ll see each other in court.”

Neely told the news station, “I only knew that I hit him when I got home and I answered the phone and got a death threat. Since then, I’ve gotten at least 40 death threats. I was just driving on Natchez Trace to relax.

He said he didn’t see the cyclist.

“No there are bikes all over the place, I didn’t see him,” Neely told the reporter.

I spoke to Marshall Neely, administrator caught on video hitting a bicyclist and never stopping. Here's a piece of his interview. @NC5 pic.twitter.com/ERISWbh7hQ

He told WKRN-TV, “I did not see the gentleman that I hit. He just kind of came from nowhere. I didn’t know I hit him.”

He said he was interviewed by police about 1 a.m. Sunday.

“(Police) came at like 1 o’clock in the morning. I was sound asleep. They asked me what happened. I said I didn’t know,” Neely told the news station. “There was another guy there with his wife, and he was standing there holding his bike, and I said all I know if maybe he threw his bike at my car, I didn’t know that for a fact.”

Neely has worked at the University School of Nashville, a private school with students ranging from kindergarten to 12th grade, since 1995, according to a now-deleted profile on the school’s website. He was listed as dean of students for the high school before his information was removed, a cached version of the page shows.

“University School of Nashville is aware of this unfortunate incident and reviewing the situation,” school spokesperson Juanita Traughber told The Tennessean.

The school later posted about Neely on its Facebook page:

Marshall Neely served as dean of students at University School of Nashville before transitioning to a part-time role this summer. He also is parent of two alumni. As of today, USN has placed Mr. Neely on leave of absence while we investigate the circumstances. All other matters related to his employment are confidential. We appreciate the work of law enforcement on this matter and will cooperate fully with their investigation. Our thoughts are with the cyclist and his family as well as the Neely family during this difficult time. 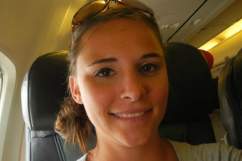 3. Bicyclists Are Allowed to Use the Full Lane of Traffic at the National Park

Natchez A sign at the Natchez Trace Parkway advises drivers that bicyclists may use the full lane of traffic.

Noe and Goodman were legally riding their bicycles on the designated bike route at the Natchez Trace Parkway National Park, authorities said.

“The Natchez Trace Parkway is a designated bicycle route, and bicycle traffic increases dramatically on the weekends and holidays. In Mississippi and Tennessee, bicyclists are allowed to use the full lane of traffic to ride in when necessary,” Acting Chief Ranger Calvin Farmer said in a statement. “Federal regulations require bicyclists to ride single file, and riders are encouraged to move to the right to allow for vehicles to pass. It is also highly recommended riders wear high-visibility clothing and flashing front and rear lights. Vehicle drivers must provide a safe distance when overtaking and passing a bicyclist.”

“If you see aggressive drivers or any unsafe act, please contact the emergency contact line for Natchez Trace Communications at 1-800-300-PARK (7275),” the park said in a press release.

The Natchez Trace Parkway Association has worked to make the parkway safer for bicyclists since the 2012 death of Dr. Gary Holdiness, who was struck and killed by a car, the association’s website says.

Signs were installed to notify drivers that bicyclists are allowed to use the full travel lane.

4. Noe, Who Was Struck by the SUV, ‘Looks Awful, but He Is Going to Be OK,’ His Friend Says

Tyler Noe is going to be OK, his friend, Greg Goodman, who recorded the video, says.

Goodman said on Facebook that his friend, Noe, a realtor from Nolensville, Tennessee, is “doing OK. He is one TOUGH DUDE!”

He told The Tennessean, “He looks awful, but he is going to be OK.”

Noe told the Washington Post, “Out of the blue, I got rear-ended.”

He said, “When it hit me. I just closed my eyes and let everything go, because there was no way of stopping it. And when I opened my eyes the car was still going.” 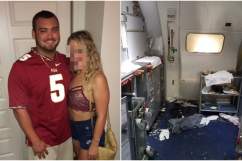 5. Neely Was Released After Posting $11,500 Bail & Could Face Additional Charges, Including Federal Offenses

Neely was released from the Williamson County Detention Center on Sunday after posting $11,500 bail, The Tennessean reports.

He was charged by local police with felony reckless endangerment, leaving the scene of an accident, failure to immediately notify of accident and failure to render aid. He faces between 1 to 6 years in prison if found guilty of the felony charge.

Neely could also face up to 30 days in jail for each of the three misdemeanor charges he also faces.