Getty A mix of cocaine and heroin waits for a user near a railway underpass in the Kensington section of Philadelphia on July 31.

During a phone call with Mexican President Enrique Pena Nieto, President Donald Trump referred to New Hampshire as a “drug-infested den,” a transcript of the January phone call obtained by The Washington Post said.

It was Trump’s first White House call with Nieto, and he pressured him to stop saying publicly that the government would never pay for the border wall he had promised to build during his presidential campaign.

“You cannot say that to the press,” Trump said, according to the transcript.

There were plenty of things said during the call that raised some eyebrows, but likely none more than Trump saying New Hampshire’s drug problem is out of control. He made reference to the issue when speaking about the illegal drugs coming into the United States from Mexico to Nieto.

“We have a massive drug problem where kids are becoming addicted to drugs because the drugs are being sold for less money than candy,” Trump said. “I won New Hampshire because New Hampshire is a drug-infested den.”

Trump’s words to Nieto have drawn the ire of several Democratic elected officials in New Hampshire.

New Hampshire Senator Maggie Hassan said on Twitter on August 3 that the president’s comments were “disgusting.”

.@realDonaldTrump's comments about New Hampshire are disgusting. As he knows, NH and states across America have a substance misuse crisis 1/

To date, @POTUS has proposed policies that would severely set back our efforts to combat this devastating epidemic 2/

Instead of insulting people in the throes of addiction, @POTUS needs to work across party lines to actually stem the tide of this crisis 3/3

The state’s other senator, Jeanne Shaheen, said that Trump owes the state an apology over his words to Nieto.

.@RealDonaldTrump owes NH an apology & then should follow through on his promise to Granite Staters to help end this crisis 1/2

It’s no secret that the U.S. has been struggling from a recent drug epidemic centered around opioids.

In fact, on July 31, the White House’s Commission on Combating Drug Addiction and the Opioid Crisis issued a preliminary report stating that Trump should “declare a national emergency under either the Public Health Service Act or the Stafford Act” because of the influx of opioid-related deaths and addiction.

While we know the issue has spiked across the nation, just how bad is the drug crisis in New Hampshire compared to other states?

Fentayl is an opioid that’s 50-100 times stronger than heroin and is the main culprit in a huge spike in overdoses, an article by the U.S. News & World Report said. From February to June 2016, the opioid-related emergency department in New Hampshire saw its visits increase by a whopping 70 percent.

New Hampshire Manchester Fire Department Chief Daniel Goonan told the publication that about half of his job is now dedicated to dealing with the opioid outbreak. He said that so far in 2017, his department has responded to over 350 opioid overdoses with 35 of them resulting in fatalities.

“This isn’t your father’s fire station anymore,” Goonan told the publication. “It’s out of our norm, but it’s what we have to deal with … I treat this (opioid crisis) as an emergency.”

While the heroin epidemic was one thing, many states across the nation are learning to deal with the fentanyl problem. The drug is typically cheaper than heroin and easier to transport, making it easier for addicts to obtain.

A study by the National Institute on Drug Abuse found that fentanyl-related overdoses increased by an incredible 1,629 percent from 2010 to 2015. 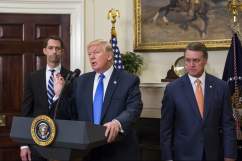 The RAISE Immigration Act: 5 Fast Facts You Need to Know