US Army Senator Franken and Leann Tweeden pictured on the now infamous USO show in December 2016.

Leann Tweeden was performing on her ninth USO show when she says she was sexually assaulted by U.S. Senator Al Franken. In a blog for WABC that was published on November 16, Tweeden accused the senator of “forcibly” kissing her. She added, “There’s nothing funny about sexually assault.” Tweeden says, “[Franken] forcibly kissed me without my consent, grabbed my breasts while I was sleeping and had someone take a photo of you doing it, knowing I would see it later and be ashamed.” One photo from the event shows that the skit involved a piece of women’s underwear (above). Franken wrote in his recent book, Al Franken: Giant of the Senate, that it was during the 2006 USO tour that he decided to run for senate. He was elected to represent Minnesota in 2009.

Tweeden wrote that Franken had written a skit for the pair to perform together for the troops in Mosul in December 2006. The sketch included a moment where Tweeden and Franken would kiss. She says that Franken insisted they practice the kiss backstage. Tweeden writes:

He repeated that actors really need to rehearse everything and that we must practice the kiss. I said ‘OK’ so he would stop badgering me. We did the line leading up to the kiss and then he came at me, put his hand on the back of my head, mashed his lips against mine, and aggressively stuck his tongue in my mouth.

Franken responded to the allegations in a statement saying, “I certainly don’t remember the rehearsal for the skit in the same way, but I send my sincerest apologies to Leann. As to the photo, it was clearly intended to be funny but wasn’t I shouldn’t have done it.” In a later, more substantial statement, Franken said:

There’s more I want to say, but the first and most important thing – and if it’s the only thing you care to hear, that’s fine – is: I’m sorry.

I respect women. I don’t respect men who don’t. And the fact that my own actions have given people a good reason to doubt that makes me feel ashamed.

But I want to say something else, too. Over the last few months, all of us – including and especially men who respect women – have been forced to take a good hard look at our own actions and think (perhaps, shamefully, for the first time) about how those actions have affected women.

For instance, that picture. I don’t know what was in my head when I took that picture, and it doesn’t matter. There’s no excuse. I look at it now and I feel disgusted with myself. It isn’t funny. It’s completely inappropriate. It’s obvious how Leann would feel violated by that picture.

According to a blog post from Sgt. 1st Class Brian Sipp written at the time of the event, it was the first stop on a USO tour of bases in Iraq. Joining Franken and Tweeden on the tour were country singers Keni Thomas, Shevy Smith, Mark Wills, and Darryl Worley. Also there were hip-hop brother and sister, the Washington Project, made up of Jekob and Rachael Washington. The Dallas Cowboys cheerleaders, Laura Beke and Shenythia Willie, were along for the ride too.

Sgt. Sipp wrote that the Mosul show “featured skits between Franken and Tweeden as well as several different audience-participation vignettes that involved soldiers from the audience.” In the blog, Andy Goes to Iraq, the sketch was described as:

Al does this Saddam bit wherein he dressed as “trial” Saddam (white shirt, black suit, beard) and is led up there in cuffs by two MPs. Then he hits on Leann Tweeden and gets dragged out yelling, “F*** You!” It’s real high-brow stuff.”

That blog was written by future Al Franken staffer Andy Barr. According to his LinkedIn page, Barr was Franken’s communications director from February 2007 until March 2009.

I would very much like a list of everyone who is currently drawing a paycheck to support serial pedophile @MooreSenate’s campaign. 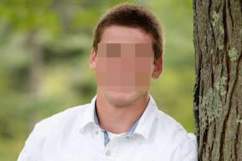