Facebook Joseph Boston was arrested after he confessed to police that he molested "upwards of 50 children," authorities said. He reportedly began the abuse when he was just 10-years-old.

An 18-year-old from California has admitted to molesting “upwards of 50 children” over an eight-year span, police say.

Joseph Boston, of Riverside, was arrested on December 2 after his mother told police her son had confessed to sexually abusing two children at a motel where he had been staying, the Riverside Police Department said in a press release.

According to police, Boston said the abuse occurred in multiple cities and he began committing the horrifying acts when he was 10. He is being held on $1 million bail.

“This is going to affect not only the victims for a long time, but also our detectives and officers involved in this – to hear someone just be very open about what they’ve done, and they’re only 18 themselves,” Officer Ryan Railsback of Riverside police, told KABC-TV.

1. Boston’s Mother Took Her Son to the Police Station to Turn Himself in After He Confessed to Her

Joseph H. Boston was arrested December 2 after police received a tip from his own mother, according to a press release from the Riverside Police Department. A sergeant on patrol at the department’s Magnolia Avenue Police Station was flagged down by Boston’s mother about 3 a.m.

“The suspect called his mother and said he had molested two young children earlier. She drove to her son’s location and took him to the police station where he later confessed the acts to officers,” police said in the press release.

Police said after Boston molested the two children he “called his own mother stating what he had just done.”

During an interview with authorities, police said Boston confessed to sexually assaulting two children at a motel he was staying at and subsequently admitted to molesting “upwards of 50 children” since he was 10-years-old.

Boston was staying at the Simply Home Inn & Suites in the 9800 block of Magnolia Avenue in Riverside.

“It was there when he befriended an 8-year-old and 4-year-old male victims, who were also staying at this motel with their parents,” police said. “The children were allowed to go into the suspect’s room last night when the molestation occurred. Hours later, the suspect called his own mother stating what he had just done.”

Police said the two young motel victims were taken into custody by The County of Riverside Child Protective Services.

During an interview with investigators, Boston “confessed to sexually assaulting the two juvenile victims in his motel room. He also admitted to molesting upwards of 50 children since he was 10-years-old in different cities where he had lived.”

Police said Boston has been in Riverside since November 2017, but previously lived in Lakewood and Buena Park in Southern California. His last known address is listed as being in Lakewood, where his mother lives.

3. He Posted Disturbing Photos & Status Updates to Facebook Before the Arrest 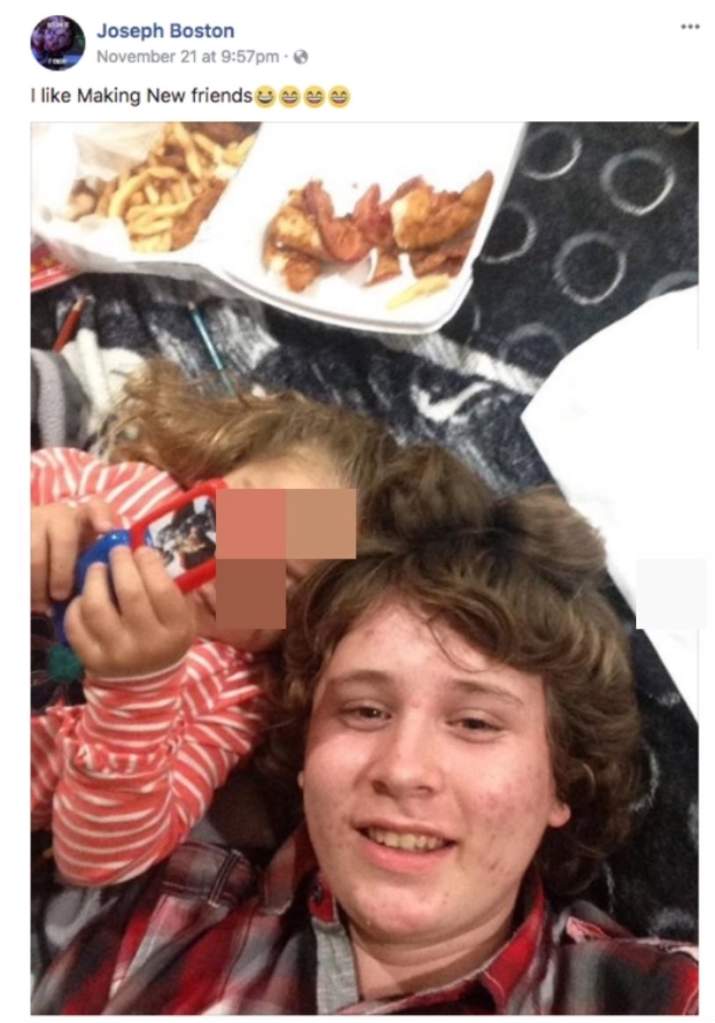 Before his Facebook page was taken down, Boston posted the above photo of himself with a child and captioned it “I like Making New friends,” alongside smiling emojis. The picture was posted on November 21, only weeks before his arrest.

In the status update pictured above, dated September 23, Boston wrote:

I will do everything to find you Brendan. Because I can not stop thinking about you. I miss talking to you, miss the look of that beautiful smile that you have. Every day I cry because I am not at you side. If you get this I just want to say that I love you very much.

It is not known at this time who Brendan is or if he was one of Boston’s victims.

On November 22 the suspected child molester posted a photo of a young sleeping boy. “What a cute kid. And they are way easier to control when they are sleeping and not in a bad way!!,” he hauntingly captioned the image: 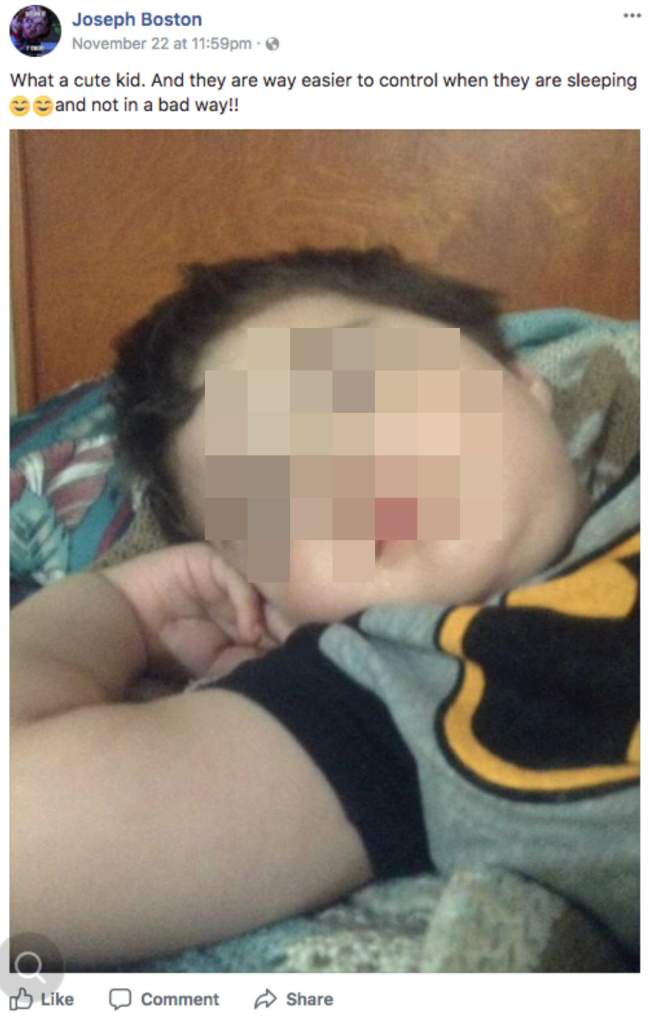 4. The Case Has Elicited Strong Opinions on Social Media, Including Many Shocked by the Age He Says He Started the Molestation

Many people who hold strong opinions regarding the case are taking to social media to express their thoughts. Some are showing sympathy for Boston because he allegedly began abusing other children while he was just a child. Others say there is no excuse and he deserves the harshest of punishments.

“So sad to hear about this behavior from such a young kid,” @k_mayville tweeted. “But I’m thankful he confessed and won’t have access to hurt anymore kiddos.”

likely it was happening to him as well. Good to know he turned himself in. I hope he and those he molested get help. So sad. ?

For him to begin abusing children when he was a child himself at the age of 10, makes me wonder what happened to him as a child. And for him to confess to his mom and the police shows a remorseful attitude. I feel terrible for the 50 kid’s he abused and the lives he has forever affected, but I also feel for what he must have gone through as a young child himself. This is a thought-provoking case.

“Not everyone who has been molested will molest. He had a choice. He made 50 wrong choices and ruined their lives,” Melissa RC replied to Morten’s comment.

“No he doesn’t deserve anything, but death,” Jessyka Dawn Lee Wilson wrote. “After seeing what happens to children after these things happen to them I have no sympathy for these people. He did it to himself.”

5. He Was Charged With 2 Counts of ‘Oral Copulation on a Child Under the Age of 10’ & Faces 15 Years to Life in Prison

According to police, Boston was arrested on two counts of “oral copulation on a child under the age of 10.” He is being held at the the Robert Presley Detention Center with his bail set at $1 million.

According to state law, Boston faces 15 years to life in prison on each count if convicted. He would also be required to register as a sex offender for life. It is not clear if police and prosecutors plan to bring more charges against Boston.

Detectives from the Sexual Assault & Child Abuse Unit are assisting authorities with the investigation. Police stated that “Detectives believe Joseph Hayden Boston has victimized other children who have not yet come forward.”

Anyone with information regarding the investigation is asked to contact Detective Paul Miranda at (951) 353-7945. You may also email him at pmiranda@riversideca.gov.

Boston is scheduled to appear in court on Wednesday. It is not clear if he has hired an attorney. 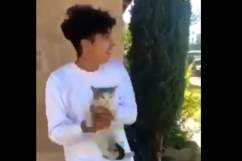 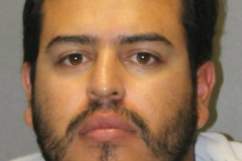 Loading more stories
wpDiscuz
0
0
Would love your thoughts, please comment.x
()
x
| Reply
Joseph Boston, of Riverside, CA, allegedly confessed to molesting "upwards of 50 children" to police. The suspect's mother turned him in after authorities say he told her that he sexually abused two children in a motel that he was staying at. Read the latest details on this developing story here.