Names of the Montecito mudslide victims who perished in the devastation are now known, and they include four children, a Catholic school founder, who was remembered as a man who lived a life of faith, and a woman known as the “first lady of luxury real estate” in Montecito. The youngest victim was only 3. The oldest was 89.

The death toll from the California mudslides has now risen to 19 people, and many people have been reported missing by loved ones. mudslides struck an area already ravaged by wildfires, sweeping away homes.

“Fifteen people were confirmed dead and two dozen people remained missing” on January 10, 2018, reported ABC News. The death toll kept growing, though, and now stands at 19. The devastation was caused by flash flooding on hillsides already ravaged by wildfires. “The mud was unleashed in the dead of night by flash flooding in the steep Santa Ynez Mountains, where hillsides were stripped of vegetation last month by the biggest wildfire on record in California,” reported ABC.

Here’s a round-up of some the people whose deaths have been confirmed.

Roy Rohter, who founded St. Augustine Academy in Ventura, died Tuesday when the Montecito mudslide swept him from his home. https://t.co/DOmLvVPfVq pic.twitter.com/v2rF0XgTsL

A local religious leader, Roy Rohter, was the first victim whose death was confirmed. According to The Ventura Star, Rohter “founded St. Augustine Academy in Ventura” and “died when a mudslide Tuesday morning in Montecito swept him from his home.”

His tragic death was confirmed by officials at St. Augustine academy, and his wife, Theresa, was rescued and “remains in stable condition,” the Star reported. The school’s headmaster, Michael Van Hecke, described Rohter to ABC7 “as a man dedicated to his faith and to helping others.”

“Roy’s life has been in service to his good, loving and ever-forgiving God,” Hecke said to the television station. “He has done so much for so many people and pro-life and Catholic education causes. … Thousands have been blessed by the Rohters’ friendship and generosity.”

On Facebook, St. Augustine wrote of Rohter: “Please pray for the repose of the soul of our founder, Roy Rohter – a giant gift to the Catholic Church and all things true, good and beautiful. Pray also for his wife, Theresa, the gentle giant of Charity and grace, and for his children and grandchildren. Thank you.”

Rohter’s grandson posted a tribute on Facebook, writing, “Please pray for the repose of the soul of my grandfather Roy Rohter. He lived like no one else and left an incredible legacy of love and generosity that I am a part of.” Wrote a friend, “I am praying for the repose of his soul and saying the Divine Mercy Chaplet in his honor and memory.”

Rebecca Riskin was known as the “first lady of luxury real estate,” according to Fox News, which noted that Montecito “is home to celebrities such as Oprah Winfrey and Ellen DeGeneres.” Riskin, 61, ran Riskin Partners, a real estate group.

Riskin’s company confirmed her death on Facebook, writing, “It is with heavy hearts we share that our dear friend and partner, Rebecca Riskin, has passed away as a result of the tragic flooding and mudslides in Montecito. The confirmation of her loss is incredibly devastating to her friends, family, and our community. Per her wishes, we intend to carry out her life’s work with the same strength, grace and elegance that wholly defined Rebecca. Rebecca was an exceptional woman, and her legacy will continue to live on and thrive through her children, Robert and Julia, her husband Ken Grand, and her namesake firm, Riskin Partners. At this time, Rebecca’s family requests privacy as they mourn her loss and celebrate her remarkable life. We too are still processing her passing and appreciate all of your kind messages and concerns. Details on a service and memorial to follow.”

The missing initially included Sawyer and Morgan Corey, young relatives who were in a home that was swept away as they slept. Sawyer Corey, 12, is now listed among the dead; her sister’s fate became known on January 13, when she was also reported dead. Sawyer’s twin sister, Summer, and their mother are in the hospital.

Tragically, the Benitez family lost three members. According to a GoFundMe site established to help the family, “The Benitez family was hit extremely hard by the Montecito flood and mudslides. They were not able to make it out of their house on time and it cost the lives of three family members: 10-year-old Jonathan Benitez, three-year-old Kailly Benitez, and Kailly’s mom. Apart from the family members that they have lost their lives, there are two more in the intensive care unit at Cottage Hospital: One 2-year-old little boy, recovering from bone fractures and the father of one of the children who passed away. Rescue workers are still searching for Faviola Benitez, Jonathan’s mom who has not yet been found. ”

My heart aches to receive confirmation about the deaths of Kailly Benitez, a 3 years old girl, Jonathan Benitez a 10 year old and Marilyn Ramos, 27 years old. I followed their story each day, praying they would be found alive. My thoughts and prayers go out to their families. pic.twitter.com/Bki6xCiCeB

According to The Washington Post, Ramos was the mother of Kailly Benitez and Jonathan was a cousin. Kailly was sleeping with her mother when the mudslide sent them all to their deaths.

This post will be updated as more victims’ identities become known. You can read about the two missing girls here: 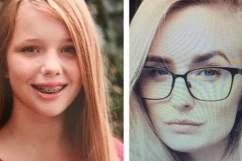