A man, who knowingly fathered a child with his daughter, murdered their child, his daughter and her adopted dad. In February 2018, Steven, 42, and his daughter Katie Pladl, 20, made international news after they were arrested and accused of incest after the pair had a child together. At the time, they were living in Knightdale, North Carolina and were planning to get married.

On April 12, CBS Raleigh-Durham reporter Colleen Quigley tweeted that Steven Pladl shot-and-killed Katie, her adoptive father and the pair’s infant child. Afterwards, Steven committed suicide. Katie and her adopted father were found dead in New Milford, Connecticut, while Steven Pladl was found dead across state lines in New Milford, Connecticut. WFSB reports that after their initial arrests, Steven Pladl was instructed to stay away from his daughter. Katie Pladl was released on the condition that she lives with her parents in New York.

The WNCN report says that Katie was born to Steven Pladl and his then-wife in 1998 and was placed for adoption out of state. In August 2016, Katie, having successfully tracked down her father via social media, moved in with her parents close to Richmond, Virginia.

1. The Pladl’s Child Was Found Dead in the Home the Pair Had Shared in North Carolina

SOURCE: suspect in #NewMilford #homicide may be tied to a #NorthCarolina homicide that occurred yesterday. pic.twitter.com/G85tsRXtaD

Speaking to WNCN, Steven’s lawyer said, “This is a tragedy for everyone involved. We are all heartbroken.” The station says that on April 11, the Pladl’s infant child was found dead inside of the home that Katie and Steven shared in Knightdale, North Carolina. Their child had been born in September 2017.

WFSB reports that the bodies of Katie Pladl and adoptive father were found in a car on the morning of April 12 in the Gaylordsville-area of New Milford, Connecticut. Fox61 reports that a man spotted the two bodies at around 8:40 a.m. inside of a pickup truck.

Early in the investigation, officials confirmed that their deaths were likely connected to the infant’s death in Knightdale. Neighbors in the Knightdale-area told police that they heard gunshots in the early morning of April 11.

2. Steven Pladl’s Other Children Were Told to Refer to Katie as Their ‘Stepmother’

Steven Pladl and his wife split in November 2016 when she moved out of their Virginia home. WTVR reports that the woman said in the last month of her and Steven’s relationship, he had begun sleeping on the floor of Katie’s room. Steven had apparently told one of his other children to refer to Katie as her stepmother, according to the WTVR report.

The woman said in an interview with WTVR that she has filed a restraining order against Steven and she is remaining anonymous to protect her other children.

In July 2017, Katie posted a photo to Instagram (above) with a caption that read, “Nothin fancy, just love.” It was accompanied with the hashtags, “JustMarried,” “SimpleWedding” and “Pregnancy.” Although officially, authorities in North Carolina are accusing the pair of “planning to marry.”

WNCN reports that Steven and Katie have lived in North Carolina since November 2017, having moved from Virginia, where arrest warrants have now been issued for the pair. If convicted, they could face ten years in prison each. 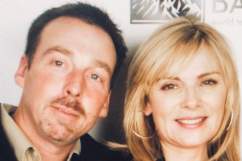 3. Katie Was an Aspiring Artist Who Planned to Attend College in New York

Katie is an aspiring artist according to a Weebly blog that she maintains. She writes, “As a child, my I copied my mother’s old drawings and would present her with each doodle, sketch and painting. In my teenage years, it was where I found my voice.” Katie also says that she became famous in her high school for her comic strips. Katie says, “A pen and something to draw on became a safe place for me. Ink became my weapon against rules and regulations.” Katie adds that, “Creativity means stepping out of your comfort zone” and that, “The number one inspiration to me is emotions. People, animals, even plants.”

On her Flickr page, Katie writes a poem in her About section that reads:

I’m naive, young and extremely odd.
I’m quiet and awkward and kind of predictable.
But that doesn’t say a whole lot because sometimes I’m loud and outgoing and pretty sporadic.
Some days I love indie and other days I love dubstep.
I hate mainstream and people and socializing with strangers.
My life is the internet and my work is in my art.
My behavior is that of a 5 year old and I believe in magic more than I believe in reality.
I’m a bit confusing. You just have to see for yourself, I guess.

On her blog, Katie wrote that in August 2016 she was due to attend Dutchess Community College in Poughkeepsie, New York. After that, Katie wanted to go on to study at SUNY Purchase which she hoped to use to go in to digital advertising. Katie attended high school in Dover Plains, New York.

4. Katie’s Mother Warned That Adopted People Seeking to Track Down Their Biological Parents Should See a Therapist First

Speaking to WTVR, Katie’s biological mother says that adopted people who are trying to seek out their biological parents should first see a therapist to ensure they are emotionally ready. The woman explained that she was 17 and Steven was 22 when they had Katie. Katie began tracking down her parents when she was 18. The biological mother says she believes that Steven began manipulating their child after she moved into their Henrico home. The couple had two younger daughters together.

WNCN reports that the Henrico County Advocacy Center interviewed the Steven Pladl’s other children who told officials that that their father was also the father of Katie’s baby on May 31, 2017.

Robi Ludwig, a psychotherapist told USA Today in 2016 that those who seek normalize genetic sexual attraction are behaving in an irresponsible manner. Ludwig compared the attraction to students who are attracted to their teachers and vice versa. He told USA Today, “When you are the professional in the parental role, you have the power. It is your role to set appropriate boundaries.” He added that the societal taboo surrounding incest can prevent people with complicated emotions from seeking help.

Loading more stories
wpDiscuz
0
0
Would love your thoughts, please comment.x
()
x
| Reply
A man, who knowingly fathered a child with his daughter, murdered their child, his daughter and her adopted dad.