Fashion designer Kate Spade has died of a reported suicide by hanging, in her Park Avenue apartment, according to the Associated Press. She was pronounced dead at 10:26 a.m. ET on June 5, 2018. In her death, Kate Spade’s daughter, Frances Beatrix, and her husband, Andy, have been left behind. At the time of her mother’s death, Frances, more commonly known as “Bea”, was just 13 years old. Get to know more about young Bea, her mother’s death and where she was when her mother tragically died.

1. Kate Spade’s Suicide Note Was Addressed to Her Daughter

GettyKate Spade’s body being removed from her home.

The Associated Press has reported that Kate Spade’s daughter was in school when she took her life. In addition, TMZ has confirmed that a suicide note was left at the scene. The note reportedly let Bea know that her mother’s death was “not her fault”. NYPD Chief of Detectives Dermot Shea confirmed that there was, indeed, a note, which read, “Bea – I have always loved you. This is not your fault. Ask Daddy!”

Cosmopolitan reported that the designer hung herself on her bedroom door and she was found by her housekeeper in her Park Avenue apartment. NBC New York has stated that the fashion icon used one of her red scarves to carry out the tragic act.

Bea’s father, Kate’s longtime husband, was home at the time of the suicide, according to NBC. The couple married in 1994.

Wishing all of our moms out there a very Happy Mother’s Day ❤️ . . . . . . #francesvalentineny #katevalentinespade #happymothersday

TMZ reported that, in 2007, Kate Spade actually sold her company so that she could take some time off to focus on raising her daughter. According to Cosmopolitan, Spade said, “I took off a good nine years raising my daughter and absolutely adored every moment of it. But then I realized that she was becoming 12 and really didn’t want me around so much, so I thought I’d get back into the business.”

Kate Spade returned to the industry in 2016, telling People, “I needed a break and I really wanted to raise my daughter [Frances]. People asked me, ‘Don’t you miss it?’ I really didn’t. I mean, I loved what I was doing, but I didn’t miss it as much as I thought I might.” Even though she may not have missed working, she came back, nonetheless. Meanwhile, her husband, Bea’s father, never left the industry. Andy Spade continued to develop businesses, with brands including Jack Spade and Sleepy Jones.

The company Kate Spade New York released the following statement upon learning of Kate’s death, “Although Kate has not been affiliated with the brand for more than a decade, she and her husband and creative partner, Andy, were the founders of our beloved brand. Kate will be dearly missed. Our thoughts are with Andy and the entire Spade family at this time.”

3. Her Parents Created a Fashion Line Dedicated to Her

Throughout their lives, Bea’s parents created multi-million-dollar fashion and advertising companies. In 2016, they launched a fashion brand called Frances Valentine, which was named after Bea. The brand focuses on accessories, handbags and shoes in particular. Find some of the Frances Valentine products to buy on their shopping website here.

The name for the brand Frances Valentine also came from other members of Kate’s family. The designer explained to Womens Wear Daily, “Frances is a longtime family name on my dad’s side. My grandfather, father, brother and my daughter’s name is Frances. And then Valentine was my mom’s dad’s middle name because he was born on Valentine’s Day.” Kate Spade legally changed her name to Katherine Noel Frances Valentine Brosnahan Spade in 2015.

Bea’s parents actually met when they were in college and working in a clothing boutique. Kate Spade previously recalled to NPR, “We worked together at a clothing store, and I was on the women’s side. He was on the men’s side. And one day, his car broke down, and he asked me for a ride home. And we really started off as really great friends.” The couple went on to create brands like Kate Spade New York, Jack Spade and Partner & Spade. 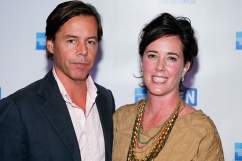 Comedian and actor David Spade is actually the brother of Andy Spade, making him Bea’s uncle. David Spade is known for his many comedic films, such as Tommy Boy, Black Sheep, Joe Dirt, and Grown Ups. David actually got his early start on Saturday Night Live.

Bea’s other uncle on her father’s side is named Bryan and he reportedly works in construction. She also has another famous cousin – Rachel Brosnahan, who many know from House of Cards.

In addition to famous family members like David Spade and Rachel Brosnahan, Kate also leaves behind many fans, who have expressed their grief over her death via Twitter. When it comes to any last words or mottos Kate Spade lived by, she told People in 2016, “Don’t rest on your laurels. The end result isn’t as important as the effort that goes into it. Jump all the way in. Don’t be afraid. And don’t worry so much” She also stated that, “My dad always says ‘Just float.’ He’s very zen. Not every little pebble is a boulder. And it’s kind of how I approached [my new brand]. I feel a little less nervous. I should be more nervous, but I’m not going to take it so crazily hopefully.”

5. She Has Appeared In a Couple Small Films

Back in the day, I opened INTERMIX with brothers Khajak and Haro Keledijian, and meet Kate & her husband David, when they were first starting out. She has always inspired me & my heart breaks especially for her 13 yr old daughter Frances Beatrix. RIP Kate Spade #SuicidePrevention pic.twitter.com/ijLc801CyC

Bea actually has her own IMDb page, with two films listed. In a project called The Pleasure of Being Robbed, in 2008, Bea actually is listed as playing “Andy’s Daughter Bea”. In addition to Bea appearing in a couple projects, her father, Andy Spade, has been in the film industry as well. Andy Spade is actually a movie producer, who has created feature films with a company called Red Bucket Films. The Pleasure of Being Robbed was one of his films.

According to IMDb, the plot description of The Pleasure of Being Robbed reads, “A curious and lost Eleonore looks for something everywhere, even in the bags of strangers who find themselves sadly smiling only well after she’s left their lives. They owe her their thanks.”

Another film Bea was in was a short called The Black Balloon in 2012. This is another film created by Bea’s dad, Andy, and the plot synopsis on IMDb describes it as this, “While trying to move 40 kids six New York City blocks all by himself, a stressed man accidentally loses a bouquet of a hundred balloons. In that bouquet, a lone black balloon scurries free from the rest. It dies and comes back to life, returning to the city, cruising for a companion. On its beat, it learns that humans are complicated creatures with extreme highs and lows, but full of life nonetheless. A film intended to be for children that turned into a sci-fi urban fable, this is the story of The Black Balloon.”

Read More
Deaths, Fashion
Follow News ↓
Kate Spade built a family with her husband Andy and when it came to kids, they had one daughter, named Frances Beatrix, aka "Bea".