Getty Police and witnesses near the scene of the shooting at Borderline Bar and Grill in Thousand Oaks, California.

At least 12 people were killed and 12 to 15 others were wounded in a mass shooting at Borderline Bar & Grill in Thousand Oaks, California. The shooting happened while the country-themed bar in Southern California was packed with college students Wednesday night. Police called the scene “horrific” and said there was “blood everywhere.”

Authorities have identified the shooter as 29-year-old David Ian Long. Long was found dead of a self-inflicted gunshot wound inside the bar, Ventura County Sheriff’s Captain Garo Kuredjian said. The shooter drove to the shooting in his mother’s car, the Los Angeles Times reports. Police said he was armed with a legally obtained Glock .45-caliber handgun and used a smoke device. You can read more about David Ian Long here.

One of the victims was Sergeant Ron Helus, a Ventura County deputy who was responding to the shooting. Helus was a 29-year veteran nearing retirement. Helus “died a hero” trying to save other lives, his colleagues said. You can read about the other victims here.

Witnesses said the shooter was silent during the attack, which police believe was planned in advance. Kuredjian said it is not believed there is any threat to the public. Homicide investigators are at the scene investigating. Police said the gunman was “heavily tattoed,” but did not provide details about the tattoos, which were used to identify him along with fingerprints, NBC News reports.

The shooting was first reported just before 11:30 p.m. local time at the restaurant located at 99 Rolling Oaks Drive in Thousand Oaks. The bar was hosting its weekly “College Country Night” when the gunfire broke out. The Ventura County Star reports there were multiple victims at the scene.

Several details about the shooting remain unclear. Here’s what we know so far:

1. A Witness Said the Suspect Shot a Security Guard & Threw Smoke Grenades Into the Bar Before Shooting People Inside

We’re back on the air with live coverage after reports of a mass shooting at #Borderline in #ThousandOaks. It’s college night, which was always a busy night when I was in school nearby. Gut-wrenching. Very few details so far. Watching anxiously. pic.twitter.com/4a6HUBCarI

According to Ventura County Sheriff’s Office Captain Garo Kuredjian, deputies responding to the scene heard gunfire and rushed toward the shots.

Approaching the scene of Borderline. Dozen of sheriff's vehicles lined up + the buzz of helicopters overhead. pic.twitter.com/Gdhz0YiBag

Witnesses said there was just one gunman. He opened fire inside the bar after shooting the security guard and throwing smoke grenades, according to the witness.

“I was at the front door and I was talking to my stepdad. I just started hearing these big pops,” John Hedge told KABC. “Pop, pop, pop. There was probably three or four, I hit the ground. I look up – the security guard is dead. Well, I don’t want to say he was dead, but he was shot. He was down. The gunman was throwing smoke grenades all over the place. I saw him point to the back of the cash register…and he just kept firing. I ran out the front door.”

From the scene: Witnesses console one another across the street from the Borderline Bar & Grill and talk to law enforcement. pic.twitter.com/eVD8DbjNib

Hedge’s stepfather, Tim, told the news station, “He fired the first shot. I knew it was live. I knew it was real. My son thought it was a joke so I pulled him down and got some cover. I looked up and he was moving to the right. He shot the front doorman, who was just a young man. Then he shot the cashier, just a young girl. Then he started moving to the right. He wasn’t looking at us. Then he went into the office, where all the cash and stuff is. He didn’t say anything at all. He just started shooting.”

After shooting inside the bar, the gunman fired at responding officers. Ventura County Sheriff’s Office Sergeant Ron Helus, a 54-year-old married father one year away from his retirement after 29 years of service with the department, was killed in the gunfire.

You can read more about Sergeant Ron Helus here.

2. A Mass Casualty Response Was Sent to the Scene & Federal, State & Local Authorities Are Now Investigating

It looks like first responders got the "all-clear" in Thousand Oaks … You can see crews walking into the building… Witnesses tell ABC7 that security guard, bar cashier both shot. Ambulances are moving in – tone has changed. pic.twitter.com/yvND1HCrwI

Police entered the building to search for victims and the shooter and firefighters were also being allowed to approach the bar, according to live news coverage.

The California Highway Patrol was also at the scene. A Ventura County SWAT team was at the scene along with the FBI and ATF agents. The bomb squad was also requested to the scene as a precaution. 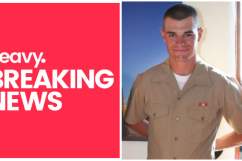 3. The Bar Hosts a College Night Every Wednesday & Some of the Survivors Were Also at the Route 91 Shooting in Vegas Last October Where 58 Concertgoers Were Killed

People are carrying the wounded out of the Borderline Bar and Grill in Thousand Oaks, CA. Reports say the gunman isn’t in custody. Image from KABC. pic.twitter.com/k6EDxScpmp

The country music-themed bar is located near the 101 Freeway off Moorpark Road. The college night begins at 9 p.m. and ends at 2 a.m. every Wednesday, according to the bar’s website. Witnesses said there were hundreds of people inside the bar. Many fled from the bar when gunfire erupted, some jumping through windows after patrons broke the glass with chairs. Others hid in bathrooms and an attic area. Bloodied survivors fled to a gas station and a nearby bar.

Several colleges are located near the bar, including California Lutheran University, California State University Channel Islands, Pepperdine University and Moorpark College. The popular restaurant is 18 and over on college nights, according to the bar’s website.

According to its website, the bar has been open in Thousand Oaks since 1993, after originally opening in Malibu. It describes itself as being the “Largest Country Dance Hall & Live Music Venue” in Ventura County, with 2,500 square feet of dance floor. The bar also has pool tables, games, TVs and hosts live music and dance lessons.

“I thought it was a joke when the shots started firing. I know people there. I hope everybody’s OK. I don’t know how I didn’t get shot,” John Hodge told KABC. His stepfather, Tim, said young people were enjoying the night in the bar when the “just having a great time when this maniac came in and started shooting people for no reason at all. These people have never hurt anybody in their lives and they’re just kids, they’re just kids.”

Witnesses have said many people at the bar also attended the Route 91 country music festival in Las Vegas in October 2017, where 58 people were killed and 851 were injured during the worst mass shooting in modern U.S. history.

“A lot of people in the Route 91 situation go here,” Chandler Gunn, 23, told the Los Angeles Times. “There’s people that live a whole lifetime without seeing this, and then there’s people that have seen it twice.”

Carl Edgar, who came to the scene after hearing about the shooting, told the Times, “As far as I know, all of my friends are OK, safe. There are a few people we can’t get a hold of, but in these situations people usually turn off their phones to be safe so I’m not gonna get too worried. A lot of my friends survived Route 91. If they survived that they’ll survive this.” 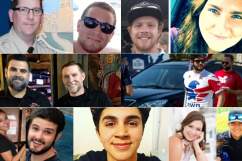 4. Officials Said at Least 30 Shots Were Fired During the Incident

Mitchell Hunter, 19, of Simi Valley, has bloodied hands after breaking a window with a chair to get out of Borderline after he heard shots on the dancefloor. #Borderline #Borderlineshooting pic.twitter.com/x3MX1rkNDf

An official told The San Diego Union-Tribune at least 30 shots were fired during the incident at the bar. It is not yet clear what kind of gun the shooter was using.

“He shot a lot, at least 30 times. I could still hear gunshots after everyone left,” an unnamed witness told the Los Angeles Times.

KABC-TV interview with eyewitness whose stepson was inside Borderline bar.

A witness told KABC-TV that the gunfire was “constant” until the shooter “changed clips.” The witnesses told the news station the gun appeared to be a handgun. Police later confirmed a Glock .45-caliber handgun was recovered at the scene.

5. A Motive for the Shooting Is Not Yet Known

Police have not released any details about the suspect’s motive. The suspect was dressed in black, possibly in a trench coat, according to witnesses. Others said he was wearing a hat and had a ski mask or bandana covering part of his face.

Deputies are interviewing people who were in Borderline during the shooting. I don't know how many victims there were yet or what condition they're in. Hoping to learn that from authorities soon. pic.twitter.com/EnfMMeQ9Bs

Ventura County Sheriff’s Office Captain Garo Kuredjian said it has been a long time since shots were fired in the city. He said it is a safe area and a shooting is very unusual there. In March 2018, Business Insider called Thousand Oaks the third-safest city to live in in the U.S. Thousand Oaks is about 40 miles west of Los Angeles.