Cary Booker is Cory Booker’s older brother. Cary, whose full name is Cary Booker II, is named after their father.

Booker may be running for president, but his brother keeps a low social profile, so that most information about him is gleaned through his brother’s social media. Cory Booker has called his brother his “third parent,” and credited him for molding his character at a young age.

On Feb. 1, following his presidential announcement, Booker appeared on The View, and his brother and mother were in the audience, cheering him on, per CNN reporter Rebecca Buck.

Here’s what you need to know about Cary Booker, Cory Booker’s brother:

I’m running for president. Join me on this journey. https://t.co/fEDqOVIfwh pic.twitter.com/h1FTPUYRzo

Cary Booker II, the oldest child in the Booker household, was named after Cory Booker’s father, Cary. In 2013, Cary Booker died at 76 years old after a battle with Parkinson’s disease, per The Star-Ledger.  He died in Las Vegas, where he and Carolyn were living. At the time, Booker was mayor of Newark.

In a statement via The Star-Ledger, city spokesman James Allen said, “Cary A. Booker was born on December 10, 1936, and moved to New Jersey in 1969. He spent most of his professional career at IBM and was happily married to Carolyn Booker for 49 years. Mayor Booker’s father was an inspiration to him and someone the mayor has often credited with being a principal reason for him entering public service.”

In a tweet that immediately followed the announcement of his presidential run, Booker wrote, “My dad used to say to me: ‘Boy, don’t forget where you came from and the people who sacrificed to get you to where you are.'”

According to a profile of Booker in The Jewish Standard, both of the Booker brothers attended Northern Valley Regional High School at Old Tappan growing up.

2. Cary Booker Is Two Years Older Than Cory, & Has a Daughter Named Zelah

Cary Booker has a quite social media footprint, but Booker will occasionally post about his brother, like in the post above from 2016 to celebrate his older brother’s birthday.

Booker wrote of his brother, “I’ve often said that I was blessed growing up with three parents. Cary is just two years older but always was one ofmy greatest guardians, mentors, teachers and friends. He is truly the epitome of a gentle man, one of the kinder people I know with a depth of goodness and decency in his soul that overflows endlessly into the world.”

Booker then shared an anecdote about Cary:

“I remember in 1984 I was playing my first varsity football game as a sophomore in High School. It was opening day for Old Tappan, our big game against our rival Demarest. My brother was a lineman and I was a wide receiver. On one play, I shot downfield on a post pattern, the quarterback, Matt Nalbandian, unloaded a bomb to me. I laid out for the pass catching it right before it hit the ground but the referee called it incomplete. To this day I know I caught that pass and at 15 I was outraged at the injustice of the ref. I got up and began yelling at the official but before I could get far into my tantrum someone grabbed me from behind and dragged me back. It was my brother and he lit into me with a rare ferocity of tone telling me unequivocally that I was to NEVER argue with an official. He dragged me back down field yelling at me about conduct, honor, and attitude: even if I was right about the catch, I was dead wrong in how I was behaving. That was the first and last time I ever raised my voice, argued, or disrespected a referee, no matter how much I may have believed they got something wrong, in my football career.”

3. Cary Booker Works for the Governor of New Jersey

Cary Booker is a top aide to New Jersey Governor Phil Murphy. The education specialist was tapped by Murphy earlier in June to run a new state agency called the Division of Early Childhood Education.

Per a profile of Booker from 2006 in The New York Times, Cary Booker has worked in the past as an education professor at the Newark campus of the Rutgers University. In the profile, Cary said about his brother, “We’re both fairly pragmatic. We like ideas, being able to test them and bounce them around and play with them.”

Cary Booker will often attend public events with his brother, and will likely attend many of his brother’s events on the presidential trail. Cary was also present at his brother’s swearing-in ceremony for senator, along with the rest of Booker’s family:

Cary also shared that he’s been mistaken for his brother in the past. To The New York Times, he recalled a moment where he was teaching in Memphis and some people walked up to him and said, “Hey aren’t you doing something up in Newark?”

4. Cary & Carolyn Were Two of the First Black Executives For IBM 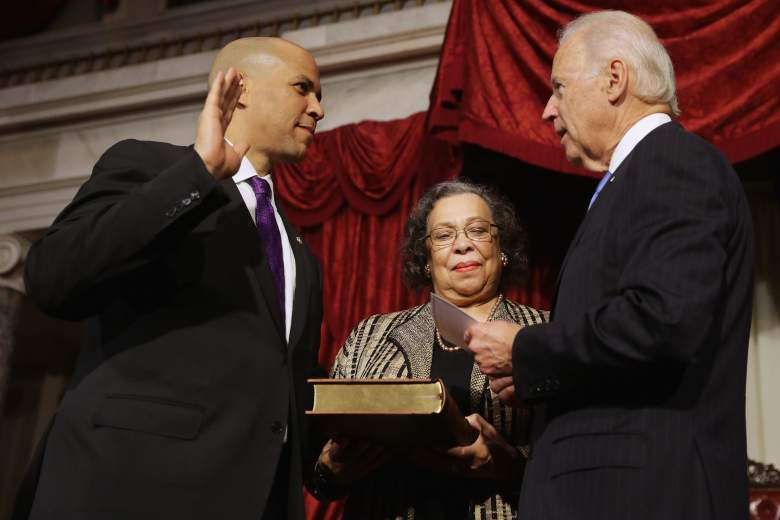 Joe Biden administers a swearing in for Cory Booker as his mother Carolyn Booker holds a Bible in the Old Senate Chamber on October 31, 2013 in Washington, DC. (Getty)

Cory Booker was raised in Harrington Park, New Jersey by Carolyn and Cary Booker. They were among the first black executives for IBM.

As Cory Booker has recounted in campaign speeches, his father, Cary Booker, was raised by a single mother in Hendersonville, North Carolina, and he shined shoes and worked in construction to pay his way through North Carolina College, according to NJ.com.

Cary and Carolyn met in Washington, D.C. and later decided to move the family to New Jersey.

5. Cary & Carolyn Booker Were Once Denied Housing in a White Neighborhood

Cary and Carolyn Booker faced racial discrimination throughout their lives, particularly when they moved their family from Washington D.C. to New Jersey.

That’s because they were denied housing in Harrington Park, a predominantly white neighborhood. Every time they wanted to look at a house, they were told it was already sold, so they took their case to the Fair Housing Council; the council would then send in a white couple to test whether the house was actually sold, and eventually the Bookers were able to purchase a home in spite of the objections of their realtor, according to New Jersey attorney Hope A. Lang.

There was also one incident in which a realtor who refused to sell a home to Cary Booker let his dog loose on Cary when he came to the realtor’s office with a lawyer.

“He sicks a dog on my dad,” Booker once said during a speech, according to NJ.com. “Now, the size of the dog has changed over the years. My father now insists it was spawn from Hell, it was Cujo. My mom will whisper to me, ‘It was just Toto.’”

Loading more stories
wpDiscuz
0
0
Would love your thoughts, please comment.x
()
x
| Reply
Cary Booker II is Cory Booker's older brother. Here's what you need to know about the sibling of the presidential candidate.