Albert Pirro, a New York attorney who once served nearly a year in federal prison for tax fraud and represented Donald Trump in real estate deals, is the former husband of Fox News host Jeanine Pirro.

They were married in 1975 and have two adult children together. The Pirros separated in 2007 but their divorce was not finalized until 2013.

1. Albert Pirro Was Convicted on Federal Charges Including Tax Evasion & Conspiracy in 2000; He Served 11 Months in Prison

Albert Pirro has been practicing law for more than four decades but in the late 1990s, he found himself in need of a lawyer himself. According to federal records, Pirro was indicted by the Southern District of New York on 33 counts including Conspiracy to Defraud the United States and Tax Evasion. The case was filed on February 23, 1999. The indictment appears to have been either removed from the online database, but we have included a screengrab of the charges Pirro faced.

Prosecutors accused Pirro of deducting $1.2 million worth of luxury items as business expenses on his tax returns. Items included expensive vehicles, real estate properties, and artwork. Pirro was found guilty and sentenced to 29 months in federal prison. Pirro originally faced a potential sentence nearly twice as long but agreed to waive his right to appeal.

Pirro addressed the court during his sentencing hearing in November of 2000. The New York Times quoted him at the time as saying, “I clearly did not fulfill my responsibilities to make a diligent enough effort to disclose my tax returns. To my wife, Jeanine, I would like to publicly apologize for the difficulties which I have imposed upon her in carrying out her professional aspirations, as well as tarnishing her stellar record.” Jeanine Pirro was the Westchester County District Attorney at the time.

Pirro got out of prison early, however. The Greenwich Time reported that Pirro served just 11 months of his sentence.

The newspaper published that fact in 2012, during a story about Pirro being arrested in Connecticut for disorderly conduct and unlawful restraint after he allegedly got into a heated argument with his then-girlfriend at a hotel bar. The charges were later dropped.

During this time period, Pirro’s law license had been temporarily suspended, but not revoked. He was reinstated with the New York bar in January 2007.

2. Albert Pirro Was Described as a Personal Friend of Donald Trump & Represented Him in Real Estate Dealings

Jeanine Pirro is known to be a friend of President Donald Trump and frequently defends him on her Fox News program. Pirro’s show was allegedly suspended in mid-March 2019 following remarks she made about Congresswoman Ilhan Omar. Jeanine Pirro questioned the congresswoman’s patriotism because Rep. Omar wears a hijab. Pirro’s show did not air in its usual slot on March 16; Fox News has yet to comment on her status. President Trump tweeted about it on March 17, asking Fox News to “Bring back @JudgeJeanine Pirro.”

But Jeanine Pirro is not the only Pirro to have a long friendship with Donald Trump. Her ex-husband Albert Pirro has been described as a friend of Trump’s as well. During his legal case in 2000, Albert Pirro’s legal team argued that Pirro’s high-value business expenses were normal because his friend group included Governor George E. Pataki and Donald J. Trump, as reported by the New York Times.

Pirro and Trump also did business together. According to New York Magazine, Pirro was the real estate lawyer trusted to handle massive deals. The magazine wrote in 1999 that Trump reportedly kept Pirro on retainer “for when he wants to develop an island off New Rochelle or build a $100 million golf-course community in Briarcliff Manor.” Another NY Mag article quoted Donald Trump describing Pirro as “incredibly intelligent and effective.”

3. Albert Pirro Was Accused of Having Ties to the Mafia

Albert Pirro has been accused in the past of having connections to organized crime. In the mid-1980s, while Jeanine Pirro had been planning to run for lieutenant governor of New York, her husband reportedly faced questions about his involvement with a waste disposal business that was suspected of having connections to the mob. Jeanine Pirro ultimately dropped her bid for the office and claimed at the time that her husband couldn’t talk about his clients.

Al Pirro’s alleged ties surfaced again in 2005, while Jeanine was the District Attorney of Westchester County. Pirro was accused of leaking information about a criminal investigation to members of the mafia. Gregory DePalma, a capo in the Gambino crime family, mentioned Pirro in a recorded conversation. DePalma said that Robert Persico, an alleged associate of the family, was tipped off by Al Pirro to an investigation his wife was handling. Jeanine Pirro was reportedly investigating a police officer suspected of being corrupt.

Albert Pirro denied the allegation. He acknowledged that Persico had been a former client but Pirro claimed he was unaware of Persico’s suspected ties to organized crime. Pirro filed a lawsuit against Persico for slander in Westchester County, but the case was dropped a few weeks later. Pirro also slammed DePalma for making the allegation and mocked him as “a self-styled Tony Soprano.”

4. Albert Pirro Had an Affair During His Marriage to Jeanine & Fathered a Child

Albert Pirro is the father of three children but one of them does not belong to Jeanine. He cheated on her during the 1980s and fathered a daughter with his mistress. The affair became public knowledge in the late 1990s when Pirro was charged with tax evasion. The indictment, cited by the New York Times, stated that Pirro faced a paternity lawsuit and had charged the legal bills to his own law firm.

The New York Post spoke with Jaclyn Marciano, Pirro’s daughter, and her mother, Jessica Hutchison, in 2005. Hutchison claimed that she and Pirro were together for nine months beginning in 1981 when she was living in Florida. (The Pirros had a vacation home in West Palm Beach).

Hutchison said she had been under the impression that Pirro had separated from his wife. She said they broke up after she became pregnant and that Pirro had encouraged her to get an abortion. But Hutchison had her daughter, Jaclyn, and put her ex-husband’s name on the birth certificate. However, she sought child support from Pirro during the 1990s. A DNA test finally confirmed that Pirro was Jaclyn’s biological father. At the time the article was published in 2005, Pirro was reportedly taking steps to be involved in his daughter’s life. Jaclyn told the Post, “I want to have a better relationship with my father. I’m having a good relationship with him. I don’t want anyone mad at me.”

Albert Pirro earned a bachelor’s degree in Psychology from St. Bonaventure University in 1969 and a master’s in criminal justice from SUNY Albany in 1971, according to his bio on his law firm’s website. He met his future wife at Albany Law School, where he graduated in 1974.

Albert and Jeanine got married in 1975, which was the same year she graduated law school. She told the New York Times in 1999 that Albert had pursued her. She described an incident at the book store where he was working the cash register. He paid for Jeanine’s books and told her he did it because he knew they would get married one day. The couple has two adult children, Cristine and Alexander. Cristine was born in 1985 and Alexander followed in 1989. Albert and Jeanine split in 2007 and their divorce was finalized in 2013.

Albert Pirro launched his own law firm as soon as he earned his law degree, according to his Linkedin profile. He explained that the Pirro Group “specializes in land use, zoning, real estate development. Pirro Group purchases and sells real estate for its own account and works as a consultant to those hiring Pirro Group for its expertise.”

It’s unclear if the Pirro Group is still operational. The front page of its website includes a link to a story that was published in Westchester Magazine in 2016 when Pirro was named as one of the most intriguing people in Westchester. 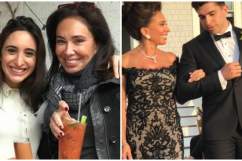