Shian Skylar Mengini, 18, is facing charges after admitting to investigators that she had fabricated a story about being sexually assaulted by another woman.

Officials said Mengini confessed to detectives that she concocted the tale. As for her motive for filing a false police report, Mengini said she did it because she was bored. She added that she had also been angry with her husband at the time.

This occurred in Upland, a small town of about 3,200 people in Delaware County, Pennsylvania. Upland is located about 20 miles southwest of Philadelphia.

1. Shian Mengini Claimed Another Woman Whom She Had Met Online Sexually Assaulted Her at Her Home

Shian Mengini told officers at the Upland Police Department in Pennsylvania that she was sexually assaulted inside her own home on April 20, 2019. According to a news release by the Delaware County District Attorney’s Office, Mengini told detectives that she had met the woman online and had invited her over.

Mengini claimed that the woman began kissing her without her consent. She said she tried to lock herself in the bathroom to get away and told the woman that she was married. But after opening the door, Mengini said the woman walked into the bathroom and began undressing her and “touching her in a sexual way.”

Mengini said she ran out of the house and headed straight to the Upland Police Department. She was transported to the Crozer Chester Medical Center, which is where detectives interviewed her.

2. Mengini’s Husband, Stephen Mengini, Told Investigators That His Wife Had Received Threatening Text Messages From the Other Woman’s Husband

An 18-year-old falsely claims she was sexually assaulted by another woman because she was mad at her husband, prosecutors say https://t.co/xzCuO7enM7

3. Shian Mengini Confessed That the Sexual Encounter With the Woman Had Been Consensual & That She Sent the Threatening Messages Herself Using Spoofed Numbers

On April 25, during a follow-up interview with investigators, Shian Mengini came clean. She admitted that a woman had come over to the house, but that the sexual activity had been consensual.

Mengini further confessed that she had never received any threatening text messages. She had created the messages and sent them to herself using spoofed numbers.

The District Attorney’s office stated in a news release that Mengini shared a motive: “She was mad at her husband and had nothing to occupy her time as she did not have friends in the area.”

District Attorney Katayoun M. Copeland said in the news release, “The fact that Shian Mengini fabricated this serious allegation because she was angry with her husband and bored is both criminal and inexcusable.”

Shian Skylar Mengini was arrested and charged with making a false police report. According to the Daily Times,, citing online records, Mengini’s case was filed as a second-degree misdemeanor.

Under Pennsylvania law, a suspect can be charged when there is evidence that they “knowingly [gave] false information to any law enforcement officer with intent to implicate another.”

Mengini was arraigned on May 8 and released on $15,000 bail. A preliminary hearing before Magisterial District Judge Thomas J. Lacey was scheduled for May 16.

5. Shian Mengini’s Husband, Stephen Mengini, Resigned From His Job With the Upland Police Department the Same Day She Confessed to Having Made Up the Sexual Assault Story

Shian Mengini was a newlywed when she made the sexual assault allegation. The Daily Times reported that she and Stephen Mengini had been married for about three months when she said she filed the police report out of boredom and anger toward her husband.

The local newspaper reported that Stephen Mengini, 28, was a part-time police officer with the Upland department. He resigned on April 25. Upland Police Chief Michael Irey said that the resignation was unexpected and called Mengini a “decent” and “effective” officer. 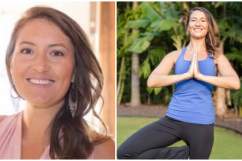 Loading more stories
wpDiscuz
0
0
Would love your thoughts, please comment.x
()
x
| Reply
Shian Mengini admitted she lied about being sexually assaulted by a woman because she was bored.