Linkedin/NASA Summer Worden, left, is accusing her estranged wife, astronaut Anne McClain, of hacking into her bank account while on the International Space Station.

Summer Worden is a former Air Force intelligence officer and the founder of a tech company who is accusing her estranged wife Anne McClain of hacking into her bank account while on the International Space Station as a NASA astronaut in what could be the first-ever “space crime” investigation. McClain has denied the accusations and says they are part of a bitter divorce and custody battle that has resulted in allegations of wrongdoing by both sides.

The New York Times first reported on the accusations made by the 44-year-old Worden against McClain, 40, to the Federal Trade Commission and NASA’s Office of Inspector General. Worden is accusing McClain of identity theft and improperly accessing her private financial records, The Times reports.

McClain’s attorney, Rusty Hardin, told The Times that his client sat down for an under-oath interview with the inspector general’s office last week, after returning from space. “She strenuously denies that she did anything improper,” Hardin told the newspaper, adding she “is totally cooperating.” He said McClain was doing what she had been allowed to do by her estranged wife, checking the family’s finances to help keep everything in order.

At the center of the dispute is Worden’s 6-year-old son, who was born about a year before she met McClain. According to The Times, Worden resisted allowing McClain to adopt her son, even if they married in late 2014, and in early 2018, McClain filed for shared parenting rights in Harris County court.

McClain, of Spokane, Washington, is a West Point graduate and Army officer who served in Iraq as a pilot before joining NASA in 2013. She gained national attention earlier in 2019 after plans for her and another astronaut to perform the first all-female spacewalk were scrapped. NASA said there were not enough suits available in their size. “Saturday Night Live” parodied the incident, with Aidy Bryant playing McClain on “Weekend Update,” and many said it was an example of sexism in science and tech. McClain was aboard the space station from December 2018 until June 24, 2019.

According to The Times, experts and NASA officials are not aware of any previous accusations of criminal activity while in space. Mark Sundahl, of the Global Space Law Center at Cleveland State University, told the newspaper, “Just because it’s in space doesn’t mean it’s not subject to law. The more we go out there and spend time out there, all the things we do here are going to happen in space.”

Here’s what you need to know about Summer Worden and her accusations against her estranged wife Anne McClain:

1. Worden Says McClain Was Illegally Accessing Her Bank Account — Including While on the Space Station — to Track Her Spending & Help in Their Divorce Case

Summer Worden told The New York Times she became suspicious about Anne McClain’s activities when she realized her estranged wife knew details about her spending that she shouldn’t have. According to The Times, Worden figured out what computers had accessed her bank account and learned that one was registered to NASA. McClain admitted she accessed the bank account while in space, but, through her attorney, told the newspaper that she did so with consent.

“I was pretty appalled that she would go that far. I knew it was not OK,” Worden told The Times. But McClain’s attorney told The Times that McClain went into the bank account using login details Worden had given her. HE said Worden did not change the password or tell McClain not to go into the account. There is no evidence that money was moved around or improperly spent by McClain. According to McClain’s lawyer, she was checking to make sure that Worden had enough money in the account to pay bills and care for Worden’s young son, whom they had been raising together prior to their separation.

According to The Times, Worden was a single mother before she met McClain. Her son, Briggs, was conceived through in vitro fertilization and carried by a surrogate, Worden told KPRC-TV. She met McClain when her son was about 1, and they married eight months later, according to the news station.

“I protect my son with everything I have. That is my No. 1 priority, but I didn’t sense at that time that she was anybody that I needed to protect him against. I trusted her,” Worden told the news site. The couple lived together in the Austin area.

Around the same time, McClain posed for official NASA photos with the boy and talked to the NASA website about being a mother, but the photos were taken down by the agency after Worden complained and said she was the boy’s sole parent. 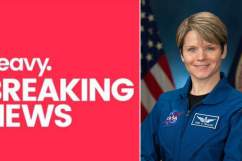 2. Worden Was Arrested in 2018 After McClain Accused Her of Assault but the Case Was Dismissed

Summer Worden was arrested in Travis County, Texas, on September 17, 2018, on assault on a family member causing bodily injury charges after Anne McClain accused her of domestic violence. The case was dismissed on March 12, 2019. McClain filed for divorce in October 2018, according to court documents.

In the custody case, McClain claimed Worden has an “explosive temper” and makes poor financial decisions. McClain has asked a judge to give her the “exclusive right to designate the primary residence of the child” if she and Worden can not reach a co-parenting agreement. The case, in Harris County, Texas, family court, is still ongoing. A hearing is scheduled for August 27.

The divorce case is also still ongoing in Harris County, with a hearing scheduled for September.

3. Worden Is a Kansas Native Who Attended University of Texas at San Antonio & Was an Intelligence Officer for the Air Force & the NSA From 2000 to 2012

Summer Worden is originally from Kansas, where she has been living with her son since her separation from McClain. Worden graduated from Canton Galva High School and then attended The University of Texas at San Antonio, graduating in 1999 with a business degree and aerospace science minor, according to her Linkedin profile. She was in the Air Force ROTC while in college.

After college, Worden served in the Air Force as an intelligence officer, from 1999 to 2006 and as intelligence operations and financial intelligence analyst from 2000 to 2012, leading a team of analysts tracking financial data and funds used by terrorists.

Worden also worked at the National Security Agency from 2006 to 2008 as an intelligence operations officer. She has a master’s in intelligence and analysis from the American Military University and completed her MBA in energy, systems technology and finance at Rice University in 2014.

According to Lesbians Who Tech, Worden took part in a White House LGBTQ Tech & Innovation Summit during the Obama administration. The website said Worden’s, “broader intelligence work includes serving in Special Access Programs for nuclear security and terrorist finance tracking, where she collaborated with the Department of Treasury, International Monetary Fund, and various IC agencies.”

4. She Founded Her Own Intelligence Firm in 2012 & Now Works in Real Estate

Worden, who is now working in real estate, founded Filly Intelligence LLC in 2012. She wrote on Linkedin, ” private technology security firm that has been built upon the people, technologies, and best practices from the National Security Agency, Air Force Nuclear Security program, Defense Intelligence Agency, DARPA, and the U.S. Secret Service. We design and implement comprehensive security services to protect the operational, digital/IT/Cyber, and physical environments. We build a high level of security with a lower level of friction; our operational solutions strengthen national security and increase the economic business competitiveness of our clients. Filly Intel is a Woman-Owned and Service-Disabled Veteran-Owned Small Business (SDVOSB).”

Worden also worked from 2009 to 2012 as director of risk and compliance at USAA Financial Services and from 2007 to 2009 at Veracity Solutions. She has also been the family council president of the Port Blakely Companies.

She wrote on Linkedin, “I am known for my integrity, straightforward approach to leadership and exceptional communication skills, honed through challenging roles in the U.S. Air Force and Intelligence Services. Whether it is understanding team and client feedback, determining competitive valuations for commercial acquisitions or structuring large sales, I have the experience, follow-through and persistence to get you the information you need to make smart decisions in a timely manner.”

Worden added, “Risk and reward are the trade-offs in any deal, and with a background in finance and analytics, I dig deep into the data to make the finances work for you. I partner with investors and operators nationwide who use my expertise and proprietary market research approach to identify opportunities that will deliver optimal returns. This ties directly to my passion for helping private family businesses thrive, something I have done for years as President, of the Family Council for Port Blakely Companies.”

5. The NASA Inspector General’s Investigation Into McClain Is Ongoing, While Worden Says the FTC Has Not Responded to Her Complaint Against McClain

The NASA Office of Inspector General’s investigation into the accusations is still ongoing, according to The Times and KPRC-TV. McClain told The Times that the FTC has not responded to her complaint.

McClain tweeted on August 24, “There’s unequivocally no truth to these claims. We’ve been going through a painful, personal separation that’s now unfortunately in the media. I appreciate the outpouring of support and will reserve comment until after the investigation. I have total confidence in the IG process.”

NASA said in a statement that the agency does not comment on personal or personnel matters and added, “Lt Col. Anne McClain has an accomplished military career, flew combat missions in Iraq and is one of NASA’s top astronauts. She did a great job on her most recent NASA mission aboard the International Space Station.”

Worden told KPRC-TV, “As a parent, this is my most basic liberty, I feel like, to have my son and enjoy raising him and make good decisions for him, and nobody has the right to step in on that.”