Richard White has been identified as one of the two victims killed in the shooting at West Freeway Church of Christ in White Settlement, Texas. A gunman opened fire during services on Sunday, December 29, 2019, killing White and a deacon, Tony Wallace. The attacker was then shot and killed by Jack Wilson, who is also a deacon at the church, and serves as its head of security.

White, a 67-year-old father and grandfather from Fort Worth, Texas, was also on the church’s security team. He was fatally shot as he tried to draw his gun after seeing the shooter pull out a shotgun from under a long coat.

White Settlement is located near Fort Worth, Texas. About 240 people were inside the West Freeway Church of Christ during the shooting. Randall Wiggs who was inside the church wrote on Facebook that White “is a hero” who saved the lives of him and his family, and several others inside the church, through his actions.

White was at church with his wife, Glenda Kasterke-White. He is also survived by his children and grandchildren. He and his wife were longtime members of the church community and several other members of the church paid tribute to him on social media and offered condolences to his wife. His wife worked at the church, according to her Facebook profile.

Richard White’s Daughter-in-Law Said, ‘You Stood Up Against Evil & Sacrificed Your Life’

Richard White was killed while trying to stop the gunman and his family called him a “true hero.”

His daughter-in-law, Misty York White, wrote on Facebook, “You were taken from us yesterday in a senseless act of violence. You stood up against evil and sacrificed your life. Many lives were saved because of your actions. You have always been a hero to us but the whole world is seeing you as a hero now. We love you, we miss you, we are heartbroken.”

The church’s Sunday morning worship was being live-streamed on YouTube.

The horrific video shows the 43-year-old gunman, a transient Texas man who had been to the church before and who had a lengthy criminal record, rise from a seat in the church and walk toward Wallace and White. After briefly talking to Wallace, the gunman can be seen taking out his gun. White tells him to drop it, the video shows, but the gunman fires and kills White as the deacon tried to draw his own gun. Wilson told reporters White possibly got a shot off before he was killed, but it missed the shooter and hit a wall.

The gunman then shot Wallace and began moving toward the front of the church. As he aimed his shotgun at the congregation, Wilson fired one shot from more than 25 feet away, hitting the shooter in the head and killing him. The entire incident unfolded in seconds. No one else was injured. 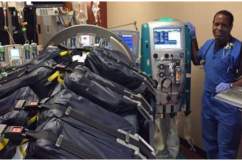 Anton ‘Tony’ Wallace: A Tribute to the Slain Deacon

White Worked as a Sales Manager at a Manufacturing Company

rest in peace Richard White. thank you so much for loving my family and supporting us, and being one of my grandfather’s best friends. thank you for showing us how to be a follower of Christ, and thank you for all of your sacrifices. you’re in a better place now. pic.twitter.com/xcVujJB6k7

White studied at Angelo State University and was a sales manager at Tankheads, Inc., a Rhome, Texas, company that makes parts for tanker trucks.

Church elder Mike Tinius told The New York Times, that White, “was trying to do what he needed to do to protect the rest of us,” when he was killed.

Britt Farmer, the church’s senior minister, told The Times, “We lost two great men today. It could have been a lot worse. I’m thankful that our government has allowed us the opportunity to protect ourselves.” According to The Times, the church’s security team, which included White, began about 10 years ago. It is made up of members of the church who are licensed to carry concealed weapons and who practice shooting regularly.

“They saved a lot of lives today. Because this thing would have been a massacre otherwise,” Minister Jack Cummings told The Times. 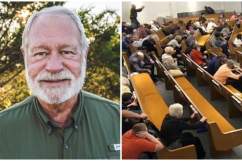 Richard White Is Survived by His Wife, Parents, 3 Children & Their Spouses, 7 Grandchildren & His 2 Brothers

Richard White and his wife.

Richard White’s family issued a statement saying, “Richard White was born in West Texas in 1952. He is survived by his loving wife, parents, three children and their spouses, seven grandchildren, and two brothers along with their spouses and children. Rich was an Eagle Scout, lover of adventure, and all things outdoors. He was a strong man of faith and a devoted member to the West Freeway Church of Christ community. He also served as an active volunteer on the church’s security team. Rich constantly put others first and was always willing to help with a smile on his face.”

White’s brother, Jay, wrote on Facebook, “Our family will never be the same without you. … We lost an amazing man, husband, son, brother, father, grandfather, uncle, cousin, and friend to many yesterday. You are our true hero.”

Family friend Andrew Farmer tweeted, “Rest in peace Richard White. Thank you so much for loving my family and supporting us, and being one of my grandfather’s best friends. Thank you for showing us how to be a follower of Christ, and thank you for all of your sacrifices. You’re in a better place now.”

READ NEXT: Meet the Deacon Who Saved Lives by Killing the Church Shooter

Loading more stories
wpDiscuz
0
0
Would love your thoughts, please comment.x
()
x
| Reply
Richard White has been identified as one of the victims killed in the shooting at West Freeway Church of Christ in White Settlement, Texas.