Dr. Amie Harwick, a family and sex therapist and comedian Drew Carey’s ex-fiancee, was found dead of suspected murder at her Hollywood Hills home on Saturday. TMZ was first to break the news, reporting that the 38-year-old fell to her death from her third-story balcony, following a struggle inside her home.

Gareth Pursehouse, Harwick’s 41-year-old ex-boyfriend, is a suspect in her death and was arrested and booked on suspicion of murder on Saturday afternoon. The Los Angeles Times reports that Harwick applied for orders of protection against Pursehouse twice before, in 2011 and again in 2012. In April 2012, a judge granted Harwick’s request for protection.

TMZ reported that Harwick’s restraining order against Pursehouse ended prior to her death. Harwick had expressed fear about Pursehouse after they broke up, but they had seen each other at some point over the past few weeks. Pursehouse could not be reached for comment by Heavy and it is not clear if he has hired an attorney who could speak on his behalf.

Here’s what you need to know about Dr. Amie Harwick and her murder:

It was such an honor to be able to support @pineappleysw at @xbizofficial as they were honored for their work to support mental health services in a stigmatized population. Photo: Chris Brody

Although Harwick was found unresponsive under the third-story balcony of her home, and died at a hospital due to injuries consistent with her fall, TMZ reports that cops have cited surveillance camera evidence that “a white male dress in black” forced entry into Harwick’s home and the two struggle inside the home before she fell from the balcony.

Her roommate told cops once they arrived on the scene that Harwick was being assaulted inside her home, and the 911 call reported that a woman was screaming in Hollywood Hills.

According to KTLA, the Los Angeles Police Department said in a statement that “The investigation revealed possible evidence of a struggle in the upstairs as well as forced entry to the residence. A canvass of the area located further evidence of an intruder (suspect) entering the property and leaving after the murder.”

The ex-boyfriend, Gareth Pursehouse, was arrested Saturday afternoon, about 4:30 p.m., and booked into the Los Angeles County Jail about 2:15 a.m. Sunday. He is being held on $2 million bail. 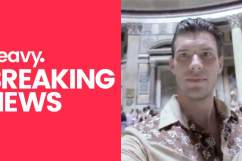 A day before her death, Harwick took to Instagram to reflect on the Valentine’s Day holiday and what it means to people. In a thoughtful post, she wrote “Many people are celebrating love today. Whether you are in a relationship or not, exposure to this could feel overwhelming if you are in an unhealthy relationship, dissatisfied with your relationship status, unhappy in your relationship, or feeling pressure to be in a relationship. I think that Valentine’s Day is a wonderful time to be mindful and redirect thoughts about love to platonic love. There is so much cultural emphasis on romantic love, but let’s be thankful for the authentic love that we give and receive to friends.”

As news of her death spread on Sunday, Instagram users flooded the post’s comments section with “RIP” messages.

Drew Carey and Amie Harwick pose for The Artists Project at Rock To Recovery 5th Anniversary Holiday Party at Avalon on December 17, 2017 in Hollywood, California.

On Instagram, Harwick used her platform to educate her over 4,000 followers on topics about sexuality, relationships, and mental health, and also offered tips and memes about going to therapy.

The day before Valentine’s Day, on February 13, Harwick again shared her thoughts on love and relationships, writing in a post “With Valentine’s Day coming up tomorrow, let’s take time to reflect on our ideas of romantic love, how it occurs, and what it means to us. Throughout time, literature, and art, we see depictions of “falling in love”, complete with Cupid shooting us with his arrow- forcing us to “fall” into this emotion. That is a narrative that hasn’t always served us well. Remember that time spent with someone, eye contact, shared experiences, mutual positive regard, and sexual connection leads to attachment and bonding. Let’s remember how much control we actually have over the partners we pick and how we move forward in our romantic relationships.”

The LAPD’s statement indicates that they responded to the call on Saturday, February 15, 2020, around 1:16 a.m., a little over an hour after Valentine’s Day had concluded.

Harwick, a Former Playboy Centerfold & Model, Was a Family Therapist & Author of ‘The New Sex Bible for Women’

Sitting in Freud’s waiting room feeling inspired by the materials, relics, writings, and collectibles of the Father of Psychology, Sigmund Freud. Many of his theories are now outdated or unsupported. However, he founded psychoanalysis which today is modernized and used as psychodynamic orientation. He coined processes and techniques that we use today such as free association, repression, and the unconscious. #freud #sigmundfreud #psychoanalysis #therapynerd

According to her website, Dr. Amie Harwick was a licensed marriage and family therapist; she was also licensed in psychotherapy and sex therapy. Throughout her career, Harwick “worked with a range of clients including, but not limited to, anxiety, depression, sexually exploited teenagers, juvenile sex offenders, children with trauma, court-mandated adults, divorce, sexual identity issues, chronic pain, sex addiction, Bipolar disorder, displaced adolescents, and domestic violence.”

Harwick appeared as an expert in a 2015 documentary called “Addicted to Sexting.”

Dr. Amie Harwick attends the “Rock To Recovery” bvenefit at The Fonda Theatre on October 2, 2016 in Los Angeles, California.

Dr. Harwick wrote the book The New Sex Bible for Women: The Complete Guide to Sexual Self-Awareness and Intimacy. The self-help book’s Amazon description explains that “Using scientific studies, case studies, testimonials, input from celebrities and professionals in the sexual health field, and illustrations, Amie Harwick walks you through every question and provides you with the information you need to become a better lover and bring even more enjoyment out of sex.”

Harwick studied at Cal Poly-Pomona, where she completed her undergraduate degree in psychology, and earned her master’s at Pepperdine University in 2011. She obtained her doctorate from the Institute for Advanced Study of Human Sexuality.

According to her bio on her book’s website, “Amie Harwick is a former Playboy centerfold and model and is currently a practicing therapist in Los Angeles, specializing in sexuality and women’s issues. rior to working as a therapist, Ms. Harwick was a Fitness Director for Bally Total Fitness in which she managed and created fitness programs. In addition, she has produced and distributed her own workout video (“Fit to Rock”) and worked as a fitness expert on the Discovery Channel.”

Thought for the morning…. I would like to suggest that you reflect on the concept by Nietzsche referred to as eternal recurrence. He suggested that it could be possible that we repeat our lives in space and time over and over. Are you prepared to repeat the life that includes all of your choices and experiences over and over for all of eternity? Sounds heavy, right? Viktor Frankl, the author of one of my favorite books, Man’s Search for Meaning, said this “Live as if you were living a second time, and as though you had acted wrongly the first time”. He challenges you to get up every morning and consciously be aware of the choices that you make in the world around you, your relationships, your career, your personal pleasure, and make these choices as if you were making a corrective action. So, if this was your second chance at life, what would you change? How would life look different? What would be more for fulfilling? #neitzsche #eternalreturn #eternalrecurrence #viktorfrankl #manssearchformeaning #choice #freedom #foodforthought

Harwick and Carey were engaged in February 2018 after making their relationship public on social media in July 2017. In November 2018, they announced that they had called off their engagement and ended their relationship.

At the time of their split, Fox News reported that a representative for Drew Carey said that the decision to end their relationship was “very amicable.”

As news of Harwick’s death spread, Carey did not immediately comment on her passing. Carey most recently appeared as a contestant on season 3 of The Masked Singer; he was unmasked as “The Llama” at the end of episode 2.

READ NEXT: The Masked Singer Season 3 Live Stream: How to Watch Online