Cirsten Weldon is an author, former model and “QAnon promoter” based in Florida who has died, a friend revealed on social media.

The Daily Beast reported that Weldon was a “QAnon promoter who urged both her followers and strangers she passed on the street not to take the COVID vaccine” and gave her cause of death as COVID-19.

A friend, Ricky Rebel, who recorded online shows with Weldon, confirmed on Facebook that Weldon, known as Cirsten W or CirstenW on social media, had died. “Cirsten W is dead,” wrote Ricky Rebel in a Facebook post, with video. Her death has spawned more conspiracy theories. In the post, he claimed, through tears, “My friend is gone. I can’t believe she’s gone…it’s so sad. I don’t know why. I think she died of COVID or maybe pneumonia..this is what they’re saying on Telegram…I really loved her…This is what I think happened. I think she’s gone. Apparently she was in a hospital, and I didn’t know which one when she talked to me on the phone…”

Ricky Rebel thought she was “healing, and then I get…all these messages right now saying she’s dead.. It’s just so mysterious to me…They killed her…I know they did.” He didn’t specify whom he meant and offered no proof. “Something is suspicious…She was just getting too close.”

Heavy has contacted the Ventura County Medical Examiner’s office to confirm Weldon’s death and to obtain the cause of death and any reports. Daily Beast reported that she died in California, although she said she was from Florida on social media.

According to Daily Beast, known as “Cirsten W” on social media, she recorded videos with Roseanne Barr and developed a following among “pro-Trump QAnon conspiracy” theorists. 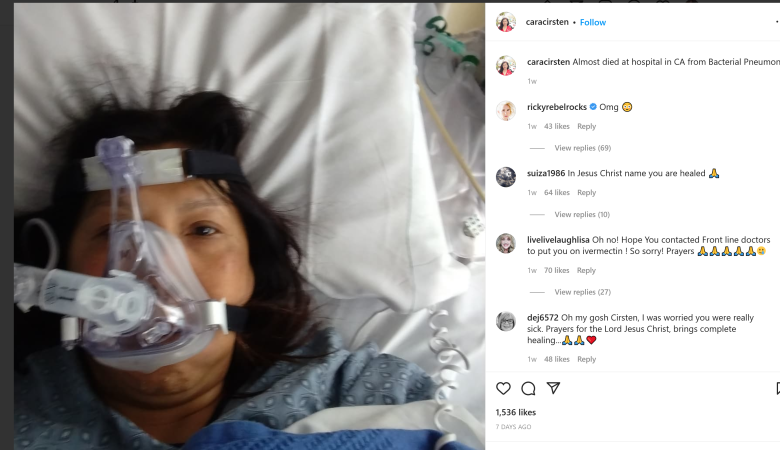 You can find Weldon’s Instagram page here. One week before her death, in January 2022, she posted a photo showing her hooked up to oxygen in a hospital bed and wrote, “Almost died at hospital in CA from Bacterial Pneumonia.”

You can watch some of her videos on Bitchute.

In one of her most recent videos, she coughed on video and declared, “I’m still exhausted.”

Part of the video dealt with Dr. Anthony Fauci. “Who the hell is Dr. Fauci,” she said in the video.

“He’s just really, really pushing it, okay…no one likes him.”

She said she was very weak and hadn’t “eaten for days.” She also said of Democrats, “This is how crazy they’ve gotten.”

She started her videos, “good morning patriots.” In a second video, she also declared she was exhausted and weak, saying she had “no strength.”

According to Daily Beast, she once said Fauci “needs to be hung from a rope” and claimed the vaccine killed people, recording “herself yelling at people standing in line to receive vaccines.”

The Centers for Disease Control and Prevention advises, “COVID-19 vaccines were developed using science that has been around for decades. COVID-19 vaccines are safe—much safer than getting COVID-19. COVID 19-vaccines are effective at preventing severe illness from COVID-19 and limiting the spread of the virus that causes it.”

Concludes CDC, “Millions of people in the United States have received COVID-19 vaccines under the most intense safety monitoring in U.S. history. CDC recommends you get a COVID-19 vaccine as soon as you can.”

Weldon Wrote on LinkedIn That Her Book Was Destroyed by Amazon & Exposed CNN, Newsweek & the CIA

She wrote that she was from Sarasota, Florida. Her “about” section says, “Residential Commercial Spaces from New Zealand, NYC, Hawaii, Calif, Singapore, Georgia, Tennessee and now Florida.”

Under author, she wrote, “Amazon decided after 3 weeks and 32K in sales to destroy my #IntelDrops book which exposes #Newsweek, #CNN and #CIA and now #CIA #Amazon.”

Her death hasn’t stopped the conspiracy theories. “RIP Cirsten Weldon ‘CirstenW’ – a True Patriot Warrior,” wrote one woman on Facebook. “She died in a California Hospital today of bacterial pneumonia. She was deliberately not allowed the kinds of meds that would help her heal. DO EVERYTHING YOU CAN TO NOT GO IN A HOSPITAL NOW!!”

A man named Chris Thomas wrote on Facebook, “R.I.P. Cirsten Weldon aka CirstenW -Jan.6 😢 Cirsten W was a well known activist and Intel gatherer/ journalist. Known mostly for finding credible information exposing pedophiles and high ranking gov officials like the Clinton’s, Jeffrey epstein, Bidens, list goes on. You can add her death to the 50 mysterious deaths linked back to people exposing the Clintons. I knew deep down they would eventually come for her…she knew too much. And she had credible sources….you will be missed, RIP Cirsten- glad you knew Jesus.”

However, a man named Roger Carrier wrote on Facebook, “No sympathy. Qtubers are a threat to America. They suffer from a dangerous mental illness.”

For 19 years, she was a “celeb interior designer” with Eurasian Designs, the LinkedIn page says. For three years until 2013, she worked for a custom rug line in Honolulu, Hawaii.

She was also CEO of “Cirsten Weldon Centerfold Wine Line,” and Asian Director of Sales and Spokesmodel for Arasys Perfector Ion Magnum Inc.

She wrote that she was also a spokesmodel and model for an infomerical for a product that promotes health and longevity.

Weldon also worked as an interior designer for “Before an Afternoon Movie” for the USA TV Network, as a spa director, and as a host in Singapore of “Stunning Spaces TV Show,” according to her LinkedIn page.

Loading more stories
wpDiscuz
0
0
Would love your thoughts, please comment.x
()
x
| Reply
Cirsten Weldon is an author, former model and "QAnon promoter" who has died. What is her cause of death?