Deon Ledet was a Texas man accused of shooting two Houston police officers who were serving an arrest warrant at a Harris County home. Ledet and an officer were shot and killed during the September 20, 2021, incident. The other officer survived the shooting and is in stable condition after undergoing surgery at a Houston hospital.

Ledet was identified as the suspect by Harris County Sheriff Ed Gonzalez. The 31-year-old Ledet was accused of violating the conditions of his release on bond in a felony drug case, according to Harris County court records. He did not report to a meeting to receive an ankle monitor and skipped a court hearing in early 2021, court records show. The warrant was being served by Houston Police’s Major Offenders Division, which handles the “most serious” high-level felony arrest warrants, authorities said. Ledet has a criminal record dating back more than a decade, including several felony arrests.

Houston Mayor Sylvester Turner said at a press conference, “This has been a tragic day today, it is another reminder that police work is inherently dangerous. Police officers never know what they’re going to face when they leave their homes during the course of their duty. … I’m going to ask the city of Houston to pray for both families. Pray for the Jeffrey family and pray for the full recovery of Sergeant Vance.”

Here’s what you need to know about Deon Ledet and the shooting:

1. Police Say Ledet Opened Fire After Officers Serving the Warrant Talked to His Girlfriend, Who Was Holding a Small Child

Authorities say Deon Ledet opened fire on officers who were serving him with an arrest warrant at a home where he lived with his girlfriend in Harris County. The shootout happened about 7:30 a.m. in the gated Timber Ridge community on Aeropark Drive, officials said at a press conference. Turner said two officers were shot multiple times and Ledet was then killed by officers who returned fire.

“We had officers assigned from the Major Offenders Division running a warrant,” Houston Police Chief Troy Finner said at a press conference. “They knocked on the door. Female comes to the door, have a conversation with her, ask where the suspect is, the suspect immediately came out and fired upon our officers. Unfortunately, striking Bill several times. And as we know, he succumbed to his injuries. Sergeant Michael Vance, thank God we got him here early and they’re working on him and he’s in stable condition.”

Finner added, “You’ve got a suspect with the female girlfriend, with small kids in that apartment complex and he still fired upon our officers. Officers returned fire, at some point striking the suspect. The suspect is deceased at the scene.” The shooting is being investigated by authorities in Harris County, along with the Houston Police internal affairs unit and the district attorney’s office, Finner said.

2. A Harris County Judge Released Ledet on Bail After He Was Arrested on a Felony Charge of Methamphetamine Possession With Intent to Deliver in November 2020 After Prosecutors Argued He Should Be Held in Custody as a ‘Habitual Offender’

Ledet was arrested in November 2020 on a felony indictment charging him with possession with intent to deliver/manufacture methamphetamine and possession of a controlled substance (cocaine), according to Harris County court records.

Harris County prosecutors sought to have Ledet held without bail, calling him a “habitual offender.” His bail was set at $40,000 by a magistrate judge and eventually lowered to $20,000 by State District Judge Greg Glass. He was released from jail after posting $20,000 bond. But court records show Ledet failed to show up for an appointment to receive an ankle monitor and missed a court appearance in December 2020. He had been a wanted fugitive from justice since January 2021.

The Houston Police Officers’ Union tweeted, “Ledet should have never been free, as a true habitual offender with two prior TDCJ trips for Agg Assault. Instead of NO-BOND, he was given bond, violated his conditions, given another bond, and then jumped bail – never charged with bail jumping. Shame on the 208th District Court.”

3. Ledet Has 18 Previous Arrests, Including Charges of Burglary, Drug Offenses, Aggravated Assault With a Deadly Weapon & Evading Arrest, Dating Back to When He Was 18

Texas Department of Public SafetyDeon Ledet is pictured in mugshots and booking photos dating from 2020 to 2017.

Ledet has at least 18 criminal arrests dating back to when he was 18, according to Texas Department of Public Safety and Harris County records. He was arrested by Houston Police in 2008 and later convicted of evading arrest with a vehicle in January 2010. He was sentenced to six months in jail. Ledet was initially given a deferred conviction and two years of probation at his sentencing in 2009 on the state jail felony, but he violated his probation, records show.

Ledet also has previous arrests in Harris County on charges including felon in possession of a weapon, assault on a family member, violation of a protective order, providing false information to a police officer and attempted evasion of arrest.

4. Ledet’s Family Said He Was a Father of 6 & Worked as a Security Guard at a Scrapyard

Ledet’s family could not immediately be reached for comment by Heavy. Ledet was born August 15, 1991, according to court records. Ledet’s address was listed in the most recent court documents as being the same as the apartment in Harris County where police were serving the arrest before the shooting.

The Houston police union wrote on Facebook, “Deon Ledet was a violent career criminal with countless convictions for targeting and victimizing innocent people. He should have never been free on bail, as he was facing life in prison on his two most recent charges. After numerous arrests, state jail, two separate prison trips, and parole violations – Deon Ledet continued to unlawfully possess firearms and prey on the citizens of Houston. The Harris County Court System failed our community once again. #HarrisCountyDeservesBetter than Judge Greg Glass.”

5. Jeffrey Was Remembered as a ‘Great Family Man’ & One of Houston’s Best Officers

Houston PoliceOfficer William “Bill” Jeffrey was shot and killed in the line of duty in Houston, Texas.

Finner said Jeffrey was a “great family man.” He started working for the Houston Police Department in December 1990 and had served in the Major Offenders Division since 2013.

“31 years of service, just a few days shy of that,” Finner told reporters at a press conference. “Most of us know him personally. I’ve known him my entire career. His wife just retired, they were building their dream home. I want to celebrate the service of him and all of our officers around the nation and in this great city.”

Turner said, “In talking with his wife this morning, Susanne, … One thing that she made very clearly to me this morning was, ‘Mayor, the city of Houston lost the very best. The very best.’ I wanted to echo that this morning because she was very emphatic about that. Let’s lift up his wife Susanne, let’s lift up the entire family of Senior Police Officer William “Bill” Jeffrey.”

Finner added, “Every police officer, every first responder is special. But like his wife said, he’s one of our very best. And I’m telling you, I’m going to celebrate that.” 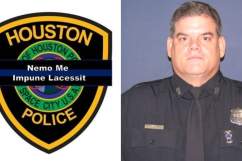 Loading more stories
wpDiscuz
0
0
Would love your thoughts, please comment.x
()
x
| Reply
Deon Ledet was a Texas man accused of shooting two Houston police officers who were serving an arrest warrant at a Harris County home. Ledet and an officer were shot and killed.