Devin Williams Jr. is an Alameda County Sheriff’s Office deputy suspected in a double homicide in Dublin, California, on September 7, 2022, officials said. Williams was off duty at the time of the shootings, according to police. The 24-year-old deputy surrendered peacefully just before noon on September 7 after alerts went out to law enforcement and the public that he was wanted. Police had said he should be considered “armed and dangerous.”

The victims, a husband and wife, have not been identified publicly. Police said at a press conference the woman was 42 and her husband was 58. Williams knew the victims but police did not provide information on exactly what their relationship was. A relative of the victims witnessed the shooting and three other family members, including the couple’s adolescent child, were inside the home at the time and likely heard the incident but did not see it, according to police.

Williams was taken into custody just before a noon press conference at the Dublin Police headquarters. Lieutenant Ray Kelly, an Alameda County Sheriff’s Office spokesperson, told reporters Dublin Police Chief Garrett Holmes “personally talked Williams into surrendering.” Kelly added that Holmes, “spent about 45 minutes on the phone with him to get him to surrender peacefully. I can see the emotion and feel the emotion in his voice. I really want to credit Chief Holmes for the leadership. He was able to bring this to a peaceful resolution. A very noble act.”

Kelly added, “Our agency is in shock. This is not something we deal with. This is not what we’re about.” Holmes told reporters, “It is a great loss for our community and it is even more disheartening to learn that it was one of our own who was the trigger person in this tragic incident.”

Before Williams, a Stockton resident, was taken into custody, Dublin Police tweeted, “Dublin Police are actively investigating this horrific crime. 24-year-old Devin Williams Jr. is considered armed and dangerous. He is not believed to be in the area, but if seen call 911 immediately and do not attempt to contact.”

Here’s what you need to know about wanted Alameda Deputy Devin Williams Jr.:

1. Deputy Devin Williams Jr. Showed Up at the Dublin House in the Middle of the Night & Then Shot the 2 Victims, Likely With His Service Weapon, Police Said

Dublin Police said in a press release officers responded to a 911 call in the 3100 block of Colebrook Lane about 12:45 a.m. on Wednesday, September 7, 2022. According to the police press release, “The caller reported two subjects had been shot inside the residence and that the suspect had fled the scene in a vehicle.”

Police added, “Upon arriving, Dublin Police found a male and female inside the residence suffering from apparent gunshot wounds. Medical aid was summoned to the residence; however, both subjects were pronounced deceased at the scene. Witnesses on scene identified the shooter as 24-year-old Devin Williams.”

At the press conference, Holmes added the 911 caller reported an “intruder” had entered the house and “was brandishing a firearm” before the shooting. Kelly said, “It was in the middle of the night and the home was quiet and then Mr. Williams showed up and then began this very horrific chain of events.”

According to Kelly, Williams told Holmes he threw the gun used in the shooting out of his car while fleeing. Kelly said they are searching for the gun, which they believe to have been Williams’ service weapon. Williams is in the custody of the California Highway Patrol and will be brought back to Dublin, Kelly said.

2. Williams Didn’t Have a History of Mental Health Issues but Was in an ‘Emotional Crisis’ When He Surrendered, Police Say

Dublin Police are actively investigating this horrific crime. 24-year-old Devin Williams Jr. is considered armed and dangerous. He is not believed to be in the area, but if seen call 911 immediately and do not attempt to contact. https://t.co/J4dz1I7xEy

Kelly said Williams was in California’s Central Valley, near Coalinga, California, when he called Dublin Police and said he wanted to turn himself in. Holmes was able to keep Williams on the phone while CHP units responded to the area where Williams had stopped and then he surrendered peacefully, Kelly said.

Kelly said Williams was in “mental health crisis” while on the phone with the Dublin chief. He said they used “crisis intervention techniques” to get him to surrender and the situation was eased when he told them he didn’t have any weapons in the car. He said during the call, “We heard from a person that was very disturbed. And in an emotional crisis.” But Kelly said Williams didn’t have a history of mental health issues.

“Nothing in his background that would indicate that. He’s been with our agency for a year,” Kelly said. He said they were going to “look at what has transpired in his life over the past year to see exactly what led up to this moment. Not only for the purposes of the criminal investigation but from a law enforcement perspective.”

He said they “do thorough background investigations. Did we miss something? He was a very good candidate for law enforcement. Somewhere in the last several months of his life, some significant events happened that led up to this.” He said those events were not disclosed to the department. He also said the couple who were killed played a role in those events, but he didn’t provide additional details.

Kelly said about Williams, “You’ll find that he grew up in a very affluent home, well-loved, graduated from college with honors. Was really a remarkable young person. How we got here today, it will be part of our investigation and something that we will be looking at as a law enforcement profession.” 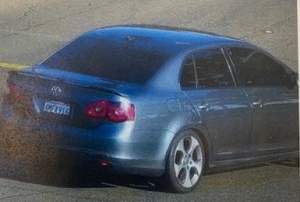 Williams was “let go” by the Stockton Police during his probationary period, according to Kelly. He graduated from the police academy and was then going through the field training program to become a certified solo police officer, Kelly said. “He did not pass his probation,” according to Kelly. He said the issues that led to his failure had to do with his “skillset and his ability to effectively do the job” and the decision was “not based on any type of conduct.”

Transparent California, a database of public payroll information, lists Williams as a Deputy Sheriff I in Alameda County for 2021. He made $23,997 in regular pay and $12,972 in overtime pay that year, along with other benefits that took his total pay to $47,117, according to the database.

The database includes salaries for Alameda County from 2011 to 2021, and Williams does not appear to have been on the payroll in previous years. His full name is Devin Tramell Williams Jr., according to the database.

4. Williams Worked at an Oakland Courthouse & County Jail Hours Before the Shootings

Kelly said it was “not uncommon” for a rookie officer to fail a probationary period and then find a job elsewhere. “We did a very thorough and complete background, psychological exam, voice-stress analysis exchange, talked to everybody in his life. There is nothing in his background. He is 24 years old. So he doesn’t have a lot of life experience per se. His background was immaculate,” Kelly said.

Kelly said during his time with the sheriff’s office there were “no problems,” and he was “not on the radar of supervisors” and there had been no reports made about him from other county personnel or his fellow employees. Kelly said Williams worked at the courthouse from 8 a.m. to about 5 p.m. on September 6 and then took an overtime shift at the Santa Rita jail. His shift there ended about 11 p.m. and he left the facility.

He said they are “trying to fill in the timeline in between” when he left the jail at the end of his shift and when he showed up at the home in Dublin early Wednesday morning. Kelly said the shootings were “not random,” adding “We believe we’ll get the full picture. At some point we will land on a motive as to a reason this happened. He knew them, this is a very bizarre chain of events that unfolded.”

5. Police Said Williams Will Be Back in Dublin Wednesday Evening

Kelly said investigators will be traveling from Dublin to the Central Valley to pick up Williams from the California Highway Patrol and bring him back to be questioned. Charges have not yet been filed against Williams and it was not immediately clear if he has an attorney who could comment on his behalf.

“This is a tragedy. We’re all in shock here,” Kelly said. Kelly added, “There is connectivity between Mr. Williams and the victims. The victims are a married couple. They have a child in Dublin. This is one of our more upper middle-class affluent areas. There is not violence, these things do not happen there.” He said it is “very shocking. We’re trying to make sense of this. A lot of questions to come.”

Dublin is a city of about 63,000 people located in Amador Valley in the East Bay region of California. The city contracts with the Alameda County Sheriff’s Office to run its police department. Kelly said while Williams worked with the sheriff’s office, he was never assigned to Dublin.