Alex Wong/Getty Former Navy SEAL Marcus Luttrell delivers a speech on the first day of the Republican National Convention on July 18, 2016 at the Quicken Loans Arena in Cleveland, Ohio.

After talking for more than two hours, Luttrell told Rogan he had to go to the bathroom and left the studio and it seemed like he would return to talk more. But The Joe Rogan Experience podcast episode published to Spotify on March 24, 2021, ended there, with Rogan’s last words being, “We’ll be right back.” The odd ending to the episode, #1622, furthered conspiracy theories and concerns among some Rogan listeners about how Spotify has handled The JRE since Rogan signed an exclusive deal with the streaming giant in 2020.

Rogan revealed the reason for the sudden ending on Instagram on March 26. Rogan wrote, “We talked a lot of s*** and drank a lot of whiskey. For people wondering why the podcast cut off abruptly after Marcus went to take a leak we decided that perhaps he had consumed a little too much to continue talking, and in retrospect, I believe that was the correct decision. Hahahaha! We’ll do it again, I’m sure. I enjoyed the f*** out of it, and I hope you do too.”

Rogan added that it was a, “A real honor and a hell of a good time to share a podcast with a great man and a real hero.”

One Reddit user asked, “It sure ended abruptly, where is the rest?” Another JRE fan tweeted,“@joerogan what happened to the end of the @MarcusLuttrell podcast on @SpotifyUSA mid run and he’s still on a piss break lol! I’m assuming it ended as is? What a legend amongst common folk! Great episode!” In The Joe Rogan Experience subreddit, a fan posted a thread on the episode, writing, “Is this the full episode or is there going to be a part two? The episode fades away after Marcus says he is going to step out to piss.”

The episode had already sparked questions from Rogan fans after it appeared to be delayed. Clips of the interview with Luttrell were posted to Rogan’s YouTube channel more than four hours before the episode itself debuted on Spotify. Typically, Rogan’s team posts two or three clips from each podcast episode on YouTube after it has already been published on Spotify.

Rogan signed an exclusive deal with Spotify to host the full episodes of The Joe Rogan Experience podcast instead of posting them on YouTube, Apple Podcasts and other services. According to The Wall Street Journal, the deal was worth more than $100 million. Rogan has said on recent podcasts episodes that Spotify is slowly working to accommodate his needs, which included creating a video platform so his podcasts wouldn’t be audio only.

Luttrell Was About to Talk to Rogan About Political ‘Chaos’ & ‘Conflict’ When He Asked if He Could Go to the Restroom, & Rogan Said They Could Take a Pause

Luttrell, who has spoken at the Republican National Convention and alongside conservative politicians, responded, “Absolutely. 100%. You want to get into that?” Rogan said, “Yeah,” and Luttrell asked, “Can I use the restroom?” Rogan replied,” Yeah go pee. We’ll pause. Jamie and I will talk about you.” Rogan then laughed and said, “Alright, we’ll be right back,” and the podcast episode ended.

Waiting for Joe Rogan’s episode on Spotify with Marcus Luttrell. He has only uploaded the clips to youtube, anyone has theories on this?

One Reddit user wrote about the ending, “Awfully strange how that went down.” Another called it, “weird.” Another Rogan listener wrote on Reddit, “Luttrell is a pretty right wing dude with a lot of right wing friends. Based on the delay to release it I wonder if he said some s*** that made the Spotify HQ staff reluctant to release it on their platform. It would explain the delay and then half the show being cut. If he had to go take a piss and while doing so got a call about some emergency that forced him to leave you’d think Joe would have addressed that on Instagram or Twitter.”

Why did the @joerogan podcast with #Marcusluttrell end like that?

A Reddit user replied, “Agreed. I’m sure that they probably said some shit after he returned and that was a clean way to cut it out, it accounts for the delay in it being released as well.” One Rogan fan added, “I was really digging his one. Bummed it ended like that, hope we get the rest of it soon!” And another said, “They were about to talk politics, so….”

On Twitter, a listener tweeted, “Yeah what’s up with it ending at a bathroom break? And then 1623 with Doug Stanhope is up now? But no 2nd half of JRE 1622? Someone have a toilet accident?” And anther replied, “The first JRE that Spotify splits into multiple episodes? Totally ends cliff-hanger style at the bathroom break. Spotify sucks.”

The delay in the episode being posted had already raised questions on social media, with Rogan fans going to Instagram, Twitter and Reddit to ask why the interview hadn’t been posted more than three hours after clips were on YouTube. On Instagram, one fan wrote to Rogan, “45 minutes after episode #1622 clips were uploaded on @youtube and still no episode on @spotify. @jamievernon @joerogan. Embarrassing.” Another added, “What’s happening with the podcast…Getting less reliable since Spotify.” 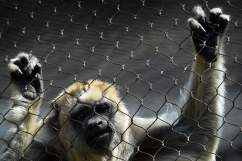 Rogan Has Said Spotify Isn’t Censoring Him: ‘They Don’t Give a F***’

Rogan fans have been questioning the move to Spotify since it was announced and some have said they have stopped listening to the podcast regularly because it is now only available on the streaming platform. Rogan has also had to address questions about whether he’s being censored by Spotify or told who he can and can’t have on as guests. When he announced the new deal, Rogan said in a video, “We’re going to be working with the same crew doing the exact same show. The only difference will be it will now be available on the largest audio platform in the world.”

In February, Rogan told comedian Fahim Anwar about Spotify, “They don’t give a f*** man. They haven’t given me a hard time at all.” Rogan told Anwar that Spotify did tell him they didn’t want some of his past episodes on the streaming platform, but he was fine with that.

“There’s a few episodes they didn’t want on their platform that I was like ‘OK, I don’t care,’” Rogan told Anwar. “But other than that, terms of what I do in the future, the big test was having Alex Jones on. A lot of people were like ‘They’re telling Joe Rogan what he can do and what he can’t do’ and I was like, ‘they’re not. They’re not. And let’s show you.’ Alex Jones and Tim Dillon was like one of my favorite podcasts I’ve done.”

Rogan also said there have been some hiccups in making the Spotify platform work well for his podcast.

“It’s eventually going to be on all platforms, in terms of television based platforms,” Rogan said. “They’re working on a bunch of different platforms. But it’s not as smooth as it probably should have been when they first transferred over in December, but they just weren’t ready for the volume. They created video because of the conversation we had about this podcast.”

Rogan added, “My manager was like, ‘think about the Elon Musk moment when Elon Musk was smoking weed.’ That was a viral moment that only happens with video. Spotify was like, ‘you’re right’ and then they started working on the video platform.”