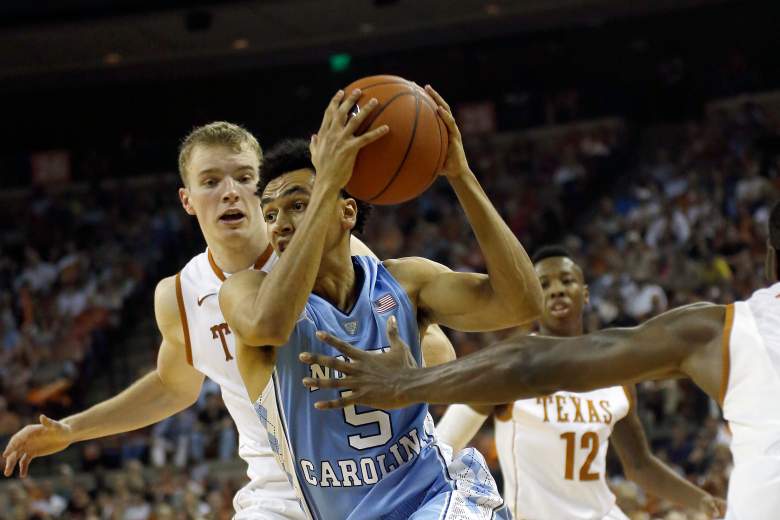 North Carolina stumbled in the rankings just a bit after a buzzer-beater loss to Texas last week. (Getty)

The Jayhawks November schedule was certainly a challenge, with games against Michigan State (their only loss) as well as home matchups against UCL and Vanderbilt, but December has been a bit different. Since the turn of the calendar, Kansas has played the likes of Loyola, Harvard, Holy Cross and Oregon State. They’ve all been victories, and lopsided ones at that, but they’re not exactly top-tier squads either.

Let’s break down London Perrantes’s game for a second. The Virginia junior guard is not only averaging 10.4 points and 5.1 assists per game, he’s also shooting over 87 percent from the free throw line. Those are incredibly good numbers. They’re also a sign that Perrantes is going to get this Cavaliers offense moving no matter what. Other teams may want to take note of him on their upcoming scouting reports.

Oh man, there might be some holes in this Villanova defense. Oklahoma made a season-high 14 3-pointers to take down the Wildcats 78-55 in Monday’s Pearl Harbor Invitational. ‘Nova could not find an answer for the Sooners’ hot-shooting ways from the outside and sank just four of their own 3-point attempts. It’s not a good performance for the Wildcats in one of their first major tests of the year. Still, there’s reason to feel relatively ok. The Wildcats bounced back with a 76-47 thrashing of La Salle.

It only took one shot for the Tar Heels to tumble a bit in this week’s rankings. Javan Felix connected on the buzzer-beater to lead Texas to an 84-82 victory over UNC on Saturday night. Normally, this wouldn’t be a huge hit to the Tar Heels standings, but their early-season loss to Northern Iowa doesn’t help much either. Watch out for this team in the close matchups down the stretch. If they can’t hold on, they may struggle a bit in league play.

The Blue Devils are riding a six-game win streak heading into the later part of December, but they haven’t played in a while. Duke hasn’t taken the court since December 5 and there could be a few cobwebs coming into this week. Grayson Allen is still, of course, Grayson Allen and his 21.8 points a night should be enough to clear out those cobwebs a bit; even with the break.

We’ve only got five more teams to rank and you can see ’em all by clicking the arrow.