There’s always bound to be a video game tie-in once a major blockbuster movie starts getting more attention and hype around it.

Spidey fans have a new film to look forward to come May 2, 2014 with the release of The Amazing Spider-Man 2. And as expected, gamers will get the chance to control Spidey in another interactive adventure. Console gamers, mobile gamers and handheld gamers will all get the chance to head into Spidey’s world and encounter some of the characters seen in the film.

Here’s everything you need to know about The Amazing Spider-Man 2 video game!

1. It’s Being Developed by a Longtime Developer of Recent Spider-Man Video Games

The Amazing Spider-Man 2 console video game is getting developed by a longtime developer of some of the more recent Spidey games. Beenox has also produced the following Spider-Man video game titles:

2. The Plot Will Not Only Focus on Elements of the Film, But It Will Also Feature Several Other Spidey Comic Book Villains

While this action/adventure release will coincide with the events of the film, it will also feature it’s own stand alone plot. The game will follow Spider-Man as he ventures across New York City in his search for Uncle Ben’s killer. Spider-Man will encounter each of the allies and villains in the game during his investigation (check out the full list of those characters below):

The video seen above showcases Kingpin’s appearance in the game.

3. Peter Parker Will be Available to Play

Spider-Man’s gameplay section will involve webbing across New York City, rescuing helpless civilians, investigating and infiltrating hideouts that house stolen Oscorp technology and much, much more. A morality system will be implemented in the game as well, which will reward/punish Spider-Man for his in-game actions.

Spider-Man won’t be the only playable protagonist. They’ll also get the chance to take control of Spider-Man’s real life counterpart, Peter Parker. As Peter Parker, players will be able to interact with his home and play in specific sections of New York City. Peter Parker won’t have the ability to free roam like Spider-Man, though.

4. 19 Spider-Man Outfits Will Be Available

There’s going to be a long list of Spider-Man outfits available for players to use. 13 costumes will be unlockable through completing certain sections of the main story mode, while 6 additional outfits can be obtained through pre-order bonuses and special purchase offers from other retailers.

Here’s the full list of announced Spider-Man costumes that will be featured in the game:

Check out the video above to get a good look at the many outfits revealed thus far. You can also hit up GameFront.com to find out how to unlock each outfit. 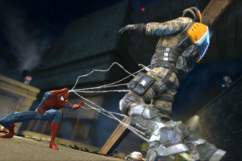 5. A Mobile and Handheld Version of the Game is Also Arriving

The console versions of the game will arrive on the PS3, PS4, 3DS, Wii U, Xbox 360, iOS devices, Android devices and PC gaming platforms. The Xbox One’s physical version of the game has been delayed indefinitely, but it is currently available as a digital download over Xbox Live. High Voltage Studios will be developing the 3DS edition of the game, while Gameloft will handle the mobile iterations. Currently, the mobile versions have already been released.

You can take a look at the video above to get a glimpse at the mobile edition of The Amazing Spider-Man 2 video game.

Get the official video game here. 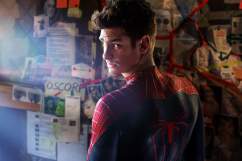 ‘The Amazing Spider-Man 2′: Top 10 Facts You Need to Know