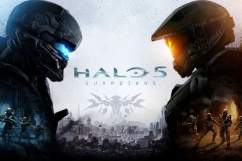 Halo has pretty much felt uninspired since Halo 3. Sure, they’ve mostly been great games, but we didn’t really get anything new in the series. But Halo 5: Guardians takes a different approach, and although it is filled with familiar guns, enemies, vehicles, and gun fights, it brings some new elements that injects some variety to create a Halo like no other.

I almost want to skip talking about how great Halo 5 looks, because it has to be expected by now. With a franchise as big as Halo, and the fact that it’s a top-tier, core title, botching the high-end graphics for feels incredibly unlikely. Still, the game looks stunning, and it’s clear that a lot of work went into making this one of, if not THE best, looking games on the Xbox One. Master Chief looks as good as ever, and the other character models are flawless. In fact, it’s especially noticeable when looking at Dr. Halsey, as she is the best-looking character in the bunch (at least, excluding Cortana, who also has an impressive-looking design). It’s even hard to identify the difference graphically between cutscenes and gameplay at times. The dynamic scaling that was announced originally had me concerned that the game wouldn’t look great, but the game runs smoothly, and any graphical degradation used to keep it at 60FPS is most unnoticeable.

Sound quality is also at the highest. It goes without saying that the Halo soundtrack is always a gem, and this year’s game isn’t any different. The familiar Halo sounds are all there, with beautiful swells and soundscapes to help immerse you in new alien worlds.

The Halo 5: Guardians gameplay is significantly better than Halo 4’s, and that’s due to a number of different elements. First, the new guns brought by the Prometheans all look incredible. These aren’t just boring-looking run-of-the-mill guns. Instead, each of the Promethean weapons have moving parts, so when you zoom in, most of the new guns move in a sort of mechanical fashion and glows slightly. It’s impressive, and it’s one of the first things that immediately caught my eye during the campaign.

As far as the campaign is concerned, you’ll split your time between fighting Prometheans and the Covenant (and, at some points, both). Unggoys, of course, make their return, and there are a few hilarious moments that they create during the campaign. Their quips are as amusing as ever, and it’s one of the things that makes Halo, well, Halo — you rarely hear your enemies say comical catchphrases during a gunfight, unless you’re playing Halo. The campaign has some truly great moments, and you’ll find yourself in awe. Many of the gun fights are truly challenging, with their being multiple ways to take out your enemies and clear each map (thanks to the incredible level design). There is a great deal of variation throughout the campaign as well, as you’ll find yourself jumping down the side of a sizable foe, controlling a mech-like vehicle, and taking on 3 mini-bosses at once. Those are just examples, and the campaign has a lot more to offer. Just when you think you might be getting sick of shooting Prometheans, the campaign switches it up.

The new combat mechanics are mostly great additions. Using B to dash in any direction feels great, aiming (which is now on the left trigger instead of having to push in the right stick) feels delightfully familiar to FPS-lovers, and the slide is a great addition. However, the “ground pound” addition, which allows you to stomp down on your foes from the air, feels a bit cheesy, and you’ll find yourself rarely using it during the campaign.

The campaign also makes it tough to die, even on the Normal difficulty, thanks to the addition of the ability to be revived by your squad (assuming they’re still alive). It’s not as easy as it sounds though, because it’s likely that when you die, you died because an elite caught you off guard, and many times, that same elite will kill your squad when they try to rez you. Still, it’s certainly going to be a polarizing mechanic that some players will love and others will hate. Personally, I love it, as it means you sometimes don’t have to be set back to your previous save point to continue.

There is also a new focus on the characters and character development with Halo 5, as they’ve even given Nathan Fillion the role of Buck (who is likely to now become a fan favorite, by the way). We’re not just looking at masks and guys in suits, but instead, each character has their own persona that shines through their robotic appearance.

Multiplayer is smooth and takes a more Call of Duty approach to things (which is ironic, since Call of Duty is taking a more futuristic Halo approach to its multiplayer). It’s faster than any previous game in the series, and the faster pace makes it more interesting. Sticking your enemies with a sticky grenade is as enjoyable as it ever was, and finding the energy sword is just as satisfying as it has been in the past. The new Warzone mode, which places you in the middle of a large scale battle on a large map, is a welcomed addition to the franchise, and it’ll keep me coming back for more, even months after its release (something that the Halos of the past has failed to do since Halo 2). The new pace is a big improvement, and there are some great new modes that will keep me interested.

Of course, the biggest issue with Guardians is the fact that there is no local multiplayer. One of the best parts of buying a Halo game is always sitting on your couch with your friends and playing co-op. Unfortunately, 343 didn’t include it, and that’s the biggest factor for this game not being as highly rated as it otherwise would be.

Halo 5 is a well-thought out story that clearly sets up a Halo 6 (don’t worry, I won’t give away the actual spoilers). If you were to tell me that 343 Industries was already working on a Halo 6 before actually playing Guardians, I probably would have been eye-rolling with the best of them. But after playing through Halo 5, another game feels necessary.