Trying to catch specific Pokemon in Pokemon Go can be a difficult task, as there’s no real way of pinpointing where certain species will always be. You can generally find types in relevant locations, i.e. water Pokemon near water, but there’s another method you can rely on: keep track of your area’s nests.

Nests are places on the map where a massive amount of the same Pokemon will spawn on a consistent basis. While you could head to water in hopes of finding a Squirtle, going to a confirmed Squirtle nest will mean you have essentially a 100 percent chance of walking away with one. Usually, the super uncommon Pokemon won’t be found in nests, but there are actually a few rare Pokemon nests that have popped up around the world. If you live near one, you basically hit the jackpot.

There are a few helpful resources to make use of if you’re hoping to find some of these nests. First, however, an important note: Niantic Labs recently began changing nest spawns so that they output different species than when the game originally launched. Some players were disappointed to find that major Dratini nests, for example, suddenly became Eevee spawns instead. Certain nests that were home to rare Pokemon also appear to have been removed entirely, as Niantic felt it was too easy to catch these high-leveled species.

This wiki, however, features a pretty solid list of spawns from around the world, as reported by users who have been there themselves. The list is sorted by species so that you can easily find what you’re looking for, though you can also click on “town/city” to sort by what’s near you specifically. The most recent nest update came on August 22nd, so be sure to check the “confirmed date” section of the chart. If information about the nest hasn’t been verified since before the 22nd, it may no longer be home to the same species as it once was.

You can also make use of this Google Maps document, which is a work in progress by users who have been adding major nests over the past few weeks. It’s by no means all-encompassing, but it’s a start.

Some are speculating that Niantic might begin rotating the nests on a regular basis, so check back in to see what changes, if any, are made by the end of September. It should also be noted that nests are different than spawns; there are some areas where certain species typically spawn, but in a nest, players will find an overwhelming number of one particular Pokemon. This, for example, was the end result of a user’s trip to an Electabuzz nest:

Heading to one of these nests, then, is an excellent way to stock up on candy for one particular species and use that to evolve it. If you’re fortunate enough to live near a rare Pokemon spawn, visiting a nest may also be your only chance to ever come across that creature in the wild. And since the spawns are expected to change sometime soon, there’s no time to lose. 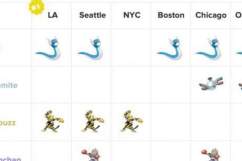 ‘Pokemon Go’ Rare ‘Pokemon’ Map: Cities Where You Can Find Them