Over the past few months, one comic book themed fighter has gotten all of the attention.

NetherRealm Studios’ all-DC fighter Injustice 2 is that game. Ever since its reveal last year, hyped fans have been treated to a weekly flood of new information. But mums been the word on another superhero brawler – Capcom’s much-anticipated Marvel vs. Capcom: Infinite. Since December of last year, there’s been nothing new on the news front regarding this mega crossover fighter…until now. Today (April 25), the cat’s out of the bag on a ton of new elements that everyone’s been going on about in chat rooms. Some of the rumors have actually been proven true!

So let’s get straight to business and break down the finer details of everything there is to know about MVCI.

First question that needs to be answered – so when exactly does Marvel vs. Capcom: Infinite officially come out? Mark your calendars, true believers! It’s September 19, 2017.

The characters confirmed for the game that we knew of before includes Captain America, Captain Marvel, Iron Man, Mega Man X, Morrigan Aensland and Ryu. Now we know of eight more entrants into Marvel and Capcom’s crossover battle royal – Ultron, Hulk, Thor, Hawkeye, Rocket Raccoon, Chun-Li, Strider Hiryu and Chris Redfield. The two newest locales your 2-on-2 battles will take place within are the Throne Room and the Avengers Tower. You can see most of these roster additions in action below:

Here’s the main premise behind the game’s Story Mode – two of the most sinister villains from their respective universes finally team together. Ultron (Marvel) and Sigma (Capcom) combine their efforts to rule a newly merged world by morphing into the all-powerful Ultron Sigma. Ultron Sigma sets out to infect all organic life with a seemingly unstoppable cybernetic virus. The heroes from both universes set out to stop him and thankfully, you’ll get to play through the game’s cinematic Story Mode and see how their heroic efforts play out. You can check out the brand new cinematic trailer below and see how Ultron Sigma came to be:

So there’s going to be three different edition of MVCI that you can start pre-ordering – the Standard ($59.99), Deluxe ($89.99) or Collector’s Edition ($199.99). The Standard Edition just comes with the main game, of course. As for the Deluxe Edition, it features the game itself and access to the “2017 Character Pass.” This DLC package grants players access to six new post-launch characters. One of the six DLC fighters already confirmed to be a part of that Season Pass is Mega Man X’s Sigma.

And finally, the Collector’s Edition (which has been curated by TriForce) comes with everything offered by the Deluxe Edition. Plus, it comes with a host of physical bonus items – four premium character dioramas (Iron Man, Captain Marvel, Mega Man X and Chun-Li), a case filled with replicas of the six Infinity Stones and a SteelBook case. The pre-order bonuses for each version of MVCI are special outfits for Ryu and Thor (Evil Ryu and Warrior Thor). Pre-ordering the Deluxe Edition will get you two more special alternate outfits – Gladiator Hulk and Command Mission X. 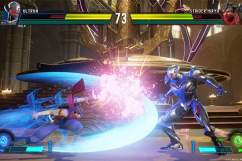