It’s no surprise when an independent team of video game developers craft something innovative and visually fascinating.

One of the more anticipated games coming from an independent team is a beautifully animated side- scrolling shooter called Cuphead. Ever since it graced the E3 2014 screen during Xbox’s press conference, tons of media outlets and interested gamers have been anticipating its eventual release. We’ve had to wait a very long time to get our hands on this frantic shooter, but now it’s set to arrive real soon. Come September 29, you and a buddy can take control of Cuphead and Mugman to take down a flood of tough bosses and random baddies.

Before you hop, dodge and shoot everything in your way, make sure you read this primer about Cuphead.

1. Cuphead was Introduced to the Gaming Public at E3 2014

Cuphead’s introduction took place at E3 2014 during Xbox’s live media briefing. At the time though, it was still in an unplayable form and was merely shown off in the form of a reveal trailer. Development on the game was still quite early and far from completion. Cuphead was given the trailer spotlight again at the next three E3 showcases for Xbox (2015, 2016 and 2017), but the official release date was announced at the last event. We now know that Cuphead is set to arrive on September 29, 2017.

2. The Development Team Started Out With Just Two Guys

In 2013, Cuphead’s dedicated development team only consisted of two individuals – the brotherly duo of Chad & Jared Moldenhauer. Over time, that 2-man team blossomed into a full blown development studio that was blessed with the MDHR label. Cuphead happens to be Studio MDHR’s very first game project, which certainly places a lot of pressure on them to deliver a quality project.

As for the animation work, an animator by the name of Jake Clark has been called upon to properly fine tune it to perfection. Development for Cuphead initially began in 2010 (the Moldenhauer duo wanted to craft a game like Cuphead all the way back in 2000, but they didn’t have the assets needed to do so). After witnessing the massive critical and financial success of Super Meat Boy in 2010, the brothers decided to go all in on their passion project.

Anyone who lays their eyes on Cuphead can see why it has garnered so much attention – its incredible ode to 1930s animation. The art style has been inspired by the works of cartoonists such as Max Fleischer. If you’ve ever watched old Walt Disney cartoons and episodes of Felix the Cat, then the visual stylings of Cuphead should instantly look familiar to you. The developers offered up an official description of what went into creating the visuals for their game:

…it takes a whole pile of work to bring this 1930s aesthetic to Cuphead in the truest form we possibly can. We are heavily inspired by vintage Fleischer Studios and Disney hand-drawn animation, but still delve into other classic studios for inspiration – ComiColor, Van Beuren, Columbia Pictures, Copley Pictures and more. We made a short video for TIME Magazine that shows the process of the what goes into a single frame of Cuphead here: http://ti.me/1Q4wDTA.

As for the game’s soundtrack, it’s primarily being handled by percussionist, drummer and musical composer Kris Maddigan. Kris has worked alongside a 13-piece big band, 10-piece ragtime ensemble and more musicians in order to produce the type of music reminiscent of the era Cuphead is lifted from. The sound effects that also harken back to 1930’s cartoons owe their audio design excellence to the team at Sweet Justice.

4. You Can Tackle the Boss Fights Solo or With a Buddy as Mugman

At first, the original theme of Cuphead revolved around the concept of a “boss rush” experience. Over time, the developers decided to add even more content to the game and give players more than just tough boss encounters to deal with. The brothers even went as far as quitting their jobs, taking out loans and hooking up with Microsoft in order to make Cuphead even better than it was initially. But the majority of the game still primarily consists of defeating bosses on your own or with a friend as either Cuphead or Mugman (through local co-op only at the moment). 75-percent of the game is dedicated solely to that manner of gameplay, but the other 25-percent consists of platforming levels.

So the plotline for Cuphead is simple – Cuphead loses a bet with the devil. Repaying that debt means he’ll need to take down a whole bunch of intimidating baddies. While the boss fights are definitely challenging, you’ll get unlimited chances to take them down. Plus you’ll get to keep any of the weapons you had equipped between each death. Cuphead and Mugman have the ability to parry certain projectiles depending on what color they are, plus they can pull off devastating special moves.

5. The Original Scope of the Game Has Been Widened Out to Include Platforming Sections

As far as the platforming stages are concerned, the demo levels shown off to the public were simply for show. They won’t be making it into the final product, but elements of that gameplay make up the concept of that portion of Cuphead. Entering these levels is done by exploring an overworld map that also contains secret areas. Just by looking at the games that inspired the overall scope of Cuphead, you’ll get an idea of what you’ll be throwing yourself into. The Moldenhauer brothers noted that their game design choices are impacted by the following titles – Gunstar Heroes, Contra III, Contra Hard Corps, Super Mario World, Street Fighter III, Mega Man, and the Thunderforce series. 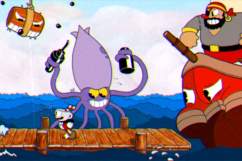