Monster Hunter World has a ton of weapons to master. Not only that, but each weapon has often tricky combos to pull off different moves. To get the most out of each weapon, you’ll not only have to learn how to do each combo but when to use them in battle.

Note: A dash indicates when buttons are pressed in sequence and a + indicates when they are pushed at the same time. Also, button prompts will be listed with the corresponding button for PS4 and then the one for Xbox One.

The Sword & Shield strikes a great balance between offense, maneuverability, and defense, making it the perfect weapon for beginners.

Note: Performing an Advancing Slash uphill or toward a ledge will result in a terrain-specific attack.

Note: You can use items and the Slinger even with the sword and shield drawn by holding R2/RT.

Note: Start the basic combo from a guard to add one more attack to the combo.

Note: Combos involving the backstep allow you to evade enemy attacks and then counterattack.

A close range weapon that specializes in fluid combos and evasion. It cannot be used to guard but you can use attacks to charge up the Spirit Gauge and unleash powerful attacks.

Hits with Spirit Roundslash change the Spirit Gauge’s color while increasing attack power. The Spirit Gauge changes from white to yellow to red.

Note: Spirit Thrust is powerful but expends one Spirit Gauge color level. But if it connects, the gauge begins to fill automatically and is fastest when the gauge is red. The power of the Helmbreaker is at maximum when the gauge is red and hits multiple times as the user leaps and slashes downward.

Note: The Step Slash lets you advance towards the enemy to attack. The Fade Slash lets you attack while backstepping and avoiding attack. Use the thrust attack for a quick poke at long range. The spirit blade attacks are powerful so long as you have enough spirit gauge. The Spirit Gauge goes up as you use regular attacks. Foresight Slash provides a long invulnerability window and can be performed mid-combo, so use it after dodging to fill the Spirit Gauge before doing a Spirit Blade attack to chain into a Spirit Roundslash.

Note: You can do a Spirit Thrust or Foresight Slash in the middle of a combo as well as after Spirit Blade III as a combo ender instead of a Spirit Roundslash.

Dual Blades lets you get right in the enemy’s face with a flurry of blows and then turn up the heat by going into Demon Mode.

Note: You can also do a basic combo after a Left Roundslash in a Lunging Strike Combo.

Note: You can constantly move forward while attacking with the above combo.

Note: You can do a Blade Dance after a Demon Mode Basic Combo for massive damage. Just try not to leave yourself vulnerable.

Note: You can do a Rising Slash in beginning, middle, or end of a combo. Same goes for the Overhead Slash.

Note: You can also do a Side Blow after a Jumping Wide Slash.

Note: There are three tiers to charging your blade. As you hold down the button, you go through each tier till you reach the third one. You’ll know when you reached a tier when your body glows red.

Basic Combo out of Guard – Guard – Kick – Tackle – Side Blow

Hammers are heavy weapons that have you attacking monsters at point blank range, dealing massive damage and potentially stunning them if hit in the head.

Note: The Big Bang can be repeated up to five times if each attack hits, with each one dealing more damage.

Note: Power Charge boosts attack and stun power, and also makes you immune to flinching while charging. It also changes the motion of your Charged Attack. This effect lasts until you either sheath the hammer, are hit by an enemy attack that causes you to flinch, or are hit with an attack that sends you flying.

Note: The Side Smash is faster than the Overhead Smash but not as strong.

Spinning Side Smash – Triangle/Y after 1st spin of Spinning Bludgeon

Cannonball Spin – Release charge while jumping off a ledge

Hunting Horns are a heavy weapon that can provide buffs for you and allies.

Note: All three of these attacks can be chained with themselves and each other.

Note: Performing after doing a specific combo will create buffs for all hunters in an area. Doing multiple combos and then performing will create multiple buffs. Combos are listed in the top right corner of the screen. You can store multiple song combos and choose which ones to activate.

Lances are slow yet strong and wide reaching weapons. They are better at guarding than any other weapon and allow you to poke at the enemy from a distance while backstepping to avoid attacks.

Note: Guarding an attack while your shield is up will make you do an automatic counterattack. You can quickly tap R2/RT rather than holding it for a Cancel Thrust.

Pressing R2/RT + X/A while charging a Counter Thrust or during guard reactions will activate Power Guard. This will reduce the stun time from guarding greatly until your gradually depleting stamina runs out, allowing you to counter attack quicker.

Turn Around – Left Stick Back + Triangle/Y during Dash Attack

Reverse Attack – Triangle/Y after Turn Around

Note: You can mix and match Mid Thrusts, High Thrusts, and Wide Sweeps together in a three hit combo. You can also backstep during or after a combo.

Gunlances are similar to Lances but with slightly less effective defensive capabilities and much stronger offensive ones with shelling attacks that provide additional damage at the end of combos.

Note: You can shell after a combo for extra damage. You can do this five times before needing to reload.

Note: Use the Lunging Upthrust to close the gap on an enemy before going into a combo.

Note: Wyvern’t Fire sends out a powerful charge of energy after a short while. The weapon will need to cool down by sheathing before it can pull off the move again. You can move the direction of the blast as you’re charging.

Note: You can use a Wyrmstake Cannon attack after landing from an Aerial Burst attack by pressing Circle/B when you land.

Note: The above two combos are powerful and hit multiple times but you will need to reload before you can do it again.

A transforming weapon that lets you swing around a powerful and wide range axe while charing up to transform into a faster sword mode with explosive finishers.

Note: You can morph between modes mid combo. You can use Sword Mode so long as you have enough charge in your Sword Guage. The guage is charged automatically in Axe Mode.

Note: Wild Swing can be repeated over and over until you run out of stamina by repeatedly pressing Circle/B.

Note: Tap Triangle/Y rapidly to build up energy after the Element Discharge connects to unleash it in an explosion that does massive damage at the cost of the phial meter.

Note: You can chain Overhead Slash Combos, Double Slash Combos, and Element Discharges into each other and repeat them so long as you have enough charge in the gauge.

Note: The Zero Sum Discharge stabs the monster with the sword and then climbs up onto it to unleash the phial’s explosion.

Charge Blades let you build up charge as a sword with mobile attacks and strong guarding before unleashing power in its strong axe mode. You build up Sword Energy as you attack in sword mode. If you build up too much, your attacks will bounce off. Perform Charge Phials while the gauge is yellow or above to fill a phial, which can be used in axe mode to perform powerful attacks.

Note: Some sword mode attacks have blocking frames such as the end of Spinning Slash or the start of Morph Slash. You’ll block automatically if an attack hits while your shield is facing forward.

Note: Condensed Element Slash and Charged Double Slash will not work properly if you hold down the button for too long. Be sure to release the button at the right time.

Elemental Roundslash – R2/RT during the start of Amped Elemental Discharge

Note: The Elemental Roundslash stores phials in the shield and charges it while switching you back to sword mode.

The Insect Glaive lets you vault into the air to attack enemies and control Kinsects that harvest extracts from monsters to boost abilities.

Note: Marking enemies makes Kinsect follow the target. You gain extract when tagging a monster with a Kinsect, and you gain a different extract by targeting certain body parts. Red improves attacks, white speeds up movement, orange prevents knockback while attacking, and green restores health. You can combine multiple colors for hybrid effects. Kinsect attacks will release Kinsect Powder and striking this releases an explosion with different effects depending on the Kinsect.

Note: Can chain Basic Combo into Wide Sweep Combo and vise versa. Tap Triangle/Y after an Overhead Smash for a Thrust.

Note: Holding down R2/RT will charge the arrow up in tiers and costs stamina. Dodging after firing and then firing again also charges arrow tiers.

Note: Charged Shots fire the same arrow as the last one but at one charge tier higher.

Note: Coatings do not need to be reloaded. Coatings will be used until they run out, are unloaded, or another coating is loaded.

Check out Heavy for more tips and tricks on Monster Hunter World. 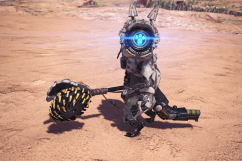 Monster Hunter World: How to Get the Horizon Zero Dawn Armor