Author’s Note: This article contains spoilers, though we did our best to make them as vague as possible. More Easter eggs will be added as they are discovered. If you found any Easter eggs or secrets we missed, be sure to let us know in the comment section below.

The game making you pick up the sword before fighting Meta Knight is already a cool callback to previous Kirby games, but there’s an even bigger secret to this fight. If instead of picking up the sword you fly over to Meta Knight on his ledge, he flies away, kicks the sword, and starts the fight from there.

Kirby Star Allies – All Secret Stone Transformations, Artist Drawings, & Sculptures (Easter Eggs)Kirby's Stone Ability is back with a ton of new secret transformations! And we're going to show them all along with the Artist Abilities drawings and sculptures. Check them all out! ——————————— Follow GameXplain! ——————————— ➤ PATREON: patreon.com/GameXplain ➤ FACEBOOK:: facebook.com/gamexplain ➤ TWITTER: twitter.com/GameXplain ➤ INSTAGRAM: instagram.com/gamexplain_official ➤ GOOGLE+: plus.google.com/108004348435696627453 ⮞ Support us by shopping…2018-02-28T15:00:05.000Z

The Stone Copy Ability lets Kirby transform into things other than his stone self. He can transform into muscular statues, star blocks, and references to other Kirby games.

Some things Kirby can transform into aren’t even from his games, such as the brick blocks from Super Mario Bros. One statue has BoxBoy from the titular game developed by HAL Laboratory who also create the Kirby games.

If you hold down and hold B, you can charge up a Force Blast projectile. But if you hit down, then forward, and then hold B, you’ll do an Instant Mega Force Blast. This may be a trickier but more effective way to charge up a Force Blast, but did you know that this is actually a fighting game reference? This button combination is the same one used to activate the Hadouken special move for Street Fighter‘s Ryu: quarter circle forward and punch or down, forward, and punch.

If you’ve played around with the Clean Copy Ability with Kirby, you may have noticed that a bunch of animals are summoned when you do certain attacks. These are the animal friends from Kirby’s Dream Land 3: Nago the cat, Pitch the bird, and ChuChu the octopus. The attacks Kirby performs with the Clean ability in Kirby Star Allies are taken directly from the moves of the Clean ability in Dream Land 3 when combined with the animal friends.

5. You Can Burn & Befriend Wispy Woods

If you use the Fire Copy Ability or any Friend Ability with a fire element on the Wispy Woods boss, then the boss will burn leading to a quick KO according to YouTube Channel GameXplain. If you toss a Friend Heart after defeating Wispy Woods, singed or not, you can befriend it and it’ll shower you in stars, health pickups, and puzzle pieces. 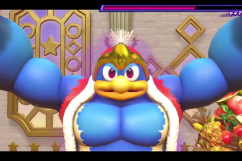 Early on in the game, you’ll fight a duo known as Pon & Con. This may be your first time fighting them, but it’s not the first time the duo appeared in a Kirby game. They were a boss in Dream Land 3 and their boss battle there was lifted for Star Allies.

Zan Partizanne is the eldest sister of the magic generals, a trio that fight Kirby throughout the game. For one of her attacks, Zan Partizanne brings out drums to augment her lightning attacks. The drums she brings out are modeled after the ones used by Raijin, the Japanese Shinto god of lightning. Raijin beats his circle of drums to create lightning. Zan Partizanne’s drums even have the same Tomoe symbol found on Raijin’s drums.

After defeating King Dedede, a silly gag will play out where the end credits will roll out really fast and then rewind back to the present. This is not only a fun joke but a sly reference to Kirby Super Star, where at the end of the Spring Breeze game mode when you defeat Dedede the end credits roll at a brisk pace even though the game as a whole is far from over. Heck, the map screen where Kirby floats on a star from planet to planet is very reminiscent of the map screen for the Milky Way Wishes game mode.

If you thought the Stone ability was the only Copy Ability to contain tons of references to past Kirby games, you’d be wrong. The Dedede, Meta Knight, and Waddle Dee characters Kirby summons via the Artist ability use the same designs as their sprites from Kirby’s Adventure on the NES. The statues Artist Kirby can create can turn into the Kabu enemy, the Dreamstalk from Triple Deluxe, and a statue of Susie from Planet Robobot as a goddess.

Throughout the game, you’ll collect puzzle pieces that can be used to put together pictures in the gallery. These pictures reference the final boss of Kirby’s Dream Land, the picnic minigame from Kirby 64, and more.

The final level of Kirby Star Allies unlocked after beating the game contains a neat callback to the very first game on the Game Boy, Kirby’s Dream Land. But GameXplain noticed an interesting secret concerning the HD Rumble feature. Watch the video above for the details but be careful as it contains late game spoilers.

The HAL Room is a recurring room in the Kirby games where the “HAL” in developer HAL Laboratory’s name is spelled out in star blocks or something else as an Easter egg and a signature by the developers. Kirby Star Allies has not one but three HAL rooms. Click the video above to see where they are located.

i haven't seen anyone make this joke yet, so i'll be the first one to make it damn it pic.twitter.com/WxSCwRJkzC

The image that depicts the challenge mode’s highest difficulty shows Kirby with insidious, red eyes. Kirby’s appearance here may be modeled after his appearance in episode 95 of Kirby: Right Back at Ya!, an anime adaptation of the games, where Kirby is possessed by a demonic frog and causes havoc. If that’s the case then this may be the first time that the games were influenced by the anime in a major way rather than the other way around.

14. The Cultural References of Kirby’s Hats

The Ancient Origins Of Kirby's Hats UNCOVERED! | Culture ShockJoin the Theorists! ►► bit.ly/1qV8fd6 The Hidden HORRORS Behind Petscop ►► bit.ly/2GfpTXc What IS a Kirby?! ► bit.ly/2kyuOsO Nintendo has some famous hats. Mario's and Luigi's. Cappy. And the pink blob with the unending closet – Kirby. Now Kirby's hats are just for fashion – they are a physical representation of his powers. But they…2018-03-15T18:06:07.000Z

The hats Kirby dons for each Copy Ability have some significant cultural inspirations for their design, as YouTuber Gaijin Goombah dives into.

The Wing ability hat is based on a Native American Double Trailer War Bonnet, a headdress made up of eagle feathers earned by a chief or warrior for acts of courage on the battlefield or selfless acts on behalf of the tribe. The Stick ability is based on the character of Son Wukong from Journey to the West. The Cutter ability appears to be based on characters from Dragon Ball. The headband Hammer Kirby wears is the Hachimaki, a band worn mostly by the Japanese working class to symbolize hard work and determination.

There are many more references Gaijin Goombah digs into so be sure to check out the video above. You won’t believe where the new Bomb ability hat came from even if I told you.

For more gaming news and guides, check out Heavy.com. 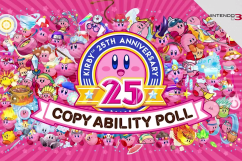 Read More
Games, Kirby, Nintendo Switch
Kirby Star Allies has so many Easter eggs and secrets. Here are 15 you may have missed.