Chapter 2 has been all about the collaborations in Fortnite and with video game juggernauts like Master Chief and Kratos in the game, it only makes sense for more to join the fray.

Just about any collaboration you can think of is in the game, including crossovers with books, so getting something from one of the most played video games of all time makes a whole lot of sense.

That’s right, a League of Legends character is making an appearance in Fortnite. No, it’s not Draven or Yasuo, but it’s another fan-favorite character. Jinx is coming to Fortnite and she’s looking like one of the coolest skins released in the game yet.

Coming off Fortnitemares and the Dune collabs, one had to wonder how many more cool skins could come into the game, but Fortnite keeps on pulling out all the stops.

Of course, taking a beloved character from Riot Games’ hit video game certainly helps, and this skin will likely end up being one of the most popular yet. Let’s take a look.

If you’re a fan of League of Legends’ mischievous hero, then you’re going to find a lot to like with this collaboration.

It might be hard to imagine a LoL character in Fortnite, mainly because the games have two wildly different art styles, but once you see it then it makes a whole lot of sense. 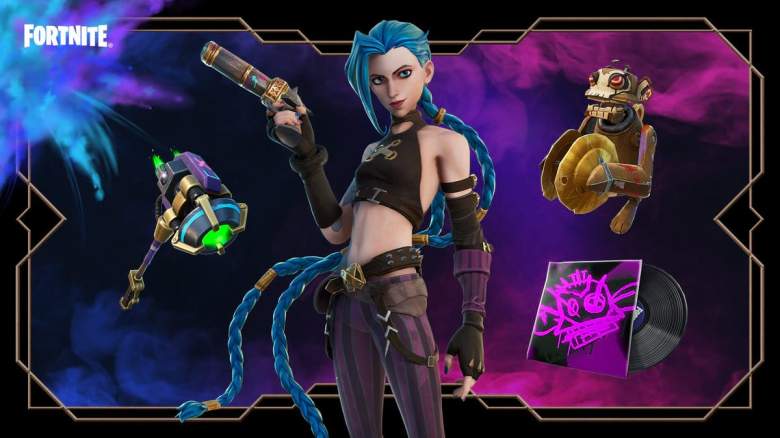 Fans who want to check out the skin in action can do so on Ninja’s Twitch channel or TheGrefg’s Twitch channel. The two of them will be playing Fortnite and showing off the new style so players know exactly what they will be getting into if they decide to buy it.

As is the case with many cosmetics released into Fortnite, it’s not just the skin you’re getting. If you’re a fan of pickaxes, music packs, and other things of that nature, then you’re in for a treat here.

We don’t have the exact price for when it hits the Item Shop, but bundles usually don’t run more than 2,500 V-Bucks, so it’ll likely be somewhere in that ballpark. It’ll likely also be cheaper for somebody who just wants the skin and nothing else.

She’ll be available in the shop beginning November 4 at 8 p.m. ET.

They changed their header as well!!

(The monkey is related to Jinx btw!) pic.twitter.com/mMtUAFHOan

Before the official announcement, Epic changed their Fortnite Twitter account up. First, they changed their profile picture to the typical F, but it was overlayed over a bunch of swirls.

The header image was the same, but it featured graffiti of a monkey next to Carnage. To just Fortnite players, this doesn’t make a ton of sense, but when you remember that Jinx likes to wreak havoc and leave a trail of mayhem in her wake, then the picture becomes clearer.

We see you over there @FortniteGame. Looks like someone from @arcaneshow is causing trouble. 💣 pic.twitter.com/sIzNKwuhrZ

It seems like the teases are more for League of Legends players, but there’s definitely a lot of crossover between the two playerbases, and with how ubiquitous Fortnite has become, a collaboration between the two gaming giants was just a matter of time.

There’s also a Netflix show that’s coming out on November 6, and this could prove to be a massive boost to viewership there.

READ NEXT: How to Get Free Cosmetics Watching the FNCS Grand Royale Finals