The start of Fortnite Winterfest has arrived and with it comes a bunch of free cosmetics for players to get their hands on.

You won’t have to spend any money at all to get these gifts, but instead the only thing you have to do is log on each day to get your present opened up.

The festivities run from December 16 until January 6, so there are a lot of presents up for grabs here that you won’t want to be missing out on.

There’s also an added bonus for Fortnite PC players, so you might want to consider installing the Epic Games Launcher on your computer to grab this exclusive skin as part of Winterfest.

That appears to be the only exclusive at the moment, so let’s take a look at all of the gifts that every Fortnite player can get.

Thanks to Fortnite leaker FireMonkey, we have the full list of rewards available for players who want to get all of their freebies.

It sounds like it’s all going to culminate in the release of a Winter Peely skin, and what fitting end to the rewards than that. Against all odds, Peely has become a mascot for Fortnite, so if can’t get enough of this banana, you’re in luck.

These rewards will be disappearing for good on January 6, so you’ll want to make sure you can get as many of them as possible. Winterfest is always a great time of the year for those of you out there who like free things, so there’s sense in missing out on all of it.

What Else to Expect 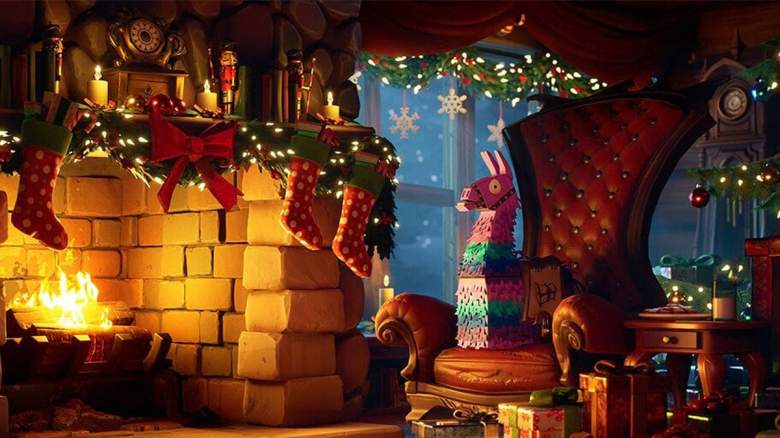 Last year’s Winterfest event brought the planes back, but they weren’t nearly as strong as they were the first time they were introduced.

This means that if Epic does decide to bring them back yet again, it won’t be a huge deal that has players scared to turn on Fortnite. There will also likely be a variety of quests to complete that’ll reward players with a bunch of XP to level up their Battle Pass.

As part of the v19.01 update, the final super styles of Chapter 3 – Season 1 were revealed, so now players know exactly what they are working toward. These styles include three additional Spider-Man suits, and considering how popular this hero is, we imagine a lot of players will want to get their hands on them.

Well, their work is certainly cut out for them, especially with the way leveling up was nerfed in Chapter 3, so these Winterfest quests will come in handy. Who knows, we might even get more cosmetics as rewards for completing the quests.

All of our questions will be answered beginning December 16, so keep your eyes peeled.