The developers behind Street Fighter V have to be commended for doing an amazing job at updating its fans about its Season 5 updates. Their latest livestream presentation was the Spring Update, which gave everyone a closer look at the next array of characters that are set to join the game’s massive roster.

The very first character we got a look at was Oro, who now engages in battle with a turtle sitting in one of his hands in an effort to test himself. A lot of the signature normals and specials fans have become familiar with from his Street Fighter III iteration thankfully make their return. One of Oro’s newest moves is an ax kick of some kind (called Tsuranekeashi) that can actually bounce his foes off the ground during its EX iteration.

His V-Skill 1 is Onibi, which is the return of his floating orb projectile. Minomushi is the name of Oro’s V-Skill 2 – this special maneuver gives him the ability to perform a small jump that transitions into a follow-up punch/kick. Manrikitan is Oro’s V-Trigger 1, which brings back his vicious command grapple that can be landed on the ground and in mid-air. And finally, Tengu Stone is his V-Trigger 2, which lets the old man shoot out the random projectiles that surround him.

Rose got the live showcase treatment next. The SFV devs provided everyone with a clearer understanding of the tarot cards she can utilize in the heat of battle. Her cards can apply positive/negative stats to the opponent, which looks to be the most interesting part of her evolved repertoire. Most of the info and footage that was detailed about Rose’s specials, V-Skills, and V-Triggers during the last update stream were shown off here once again. As for the character’s release date, everyone can look forward to playing with Rose on April 19. Alongside her launch will be three new skins for Vega, Seth, and Juri that come in the form of professional costumes.

The last bit of footage we got during the SFV Spring update stream was super hype because it was all about Akira Kazama! The Rival Schools fan favorite got to show off her rekka specials and, most surprisingly, the ability to pull off some pretty sick air combos (known as Ariel Raves in Rival Schools). Even Akira’s big brother Daigo makes an appearance as an instant KO V-Trigger! That brief look at the upcoming Season 5 character was the cherry on top for an entertaining SF5 update stream. 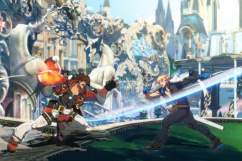