One person was hospitalized Tuesday night after a shooting inside of a Benihana restaurant in Atlanta. Here’s what you need to know.

1. It Happened Inside a Japanese Steakhouse in Atlanta

The shooting occured at the Japanese steakhouse Benihana in Buckhead on Tuesday night, reports MyFoxAtlanta. The restaurant is located on the 2000 block of Peachtree Road.

2. One Person Was Injured

One man was hospitalized after the shooting. He was transported to Grady Memorial Hospital where he is listed in stable condition. According to Officer John Chafee of the Atlanta Police Department, two others received minor lacerations, but did not have to go to the hospital.

3. He Was Shot in the Buttocks

The victim was apparently leaving the restaurant with a group of people when two others approached him. He tried to turn around and reenter the restaurant, but was shot in the buttocks.

4. The Suspects are Two Males

Police report that the suspects are two black males and that they left the scene traveling northbound on Peachtree Road in a beige Doge Charger. A motive has not yet been determined, but it is believed that the victim was targeted. The suspects remain at large. This is a developing story. Stay tuned for updates.

5. This is the Second Shooting in the Atlanta Area on the Same Day

SWAT team members descended on the Ronald E McNair Discover Learning Academy Elementary School in DeKalb County Tuesday morning after a gunman was reported on the campus at around 1:00 p.m. It’s reported that a lone gunman entered the school and opened fire, firing as many as six shots. Thankfully, not one was shot and the gunman was taken into custody. 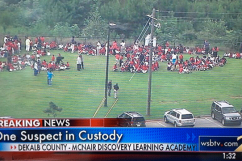