Florida resident and Breaking Bad fan Ryan Lee Carrol was arrested after a drug raid early Wednesday morning, reports the NYDailyNews, here’s 5 Fast Facts You Need to Know about Ryan and his story.

1. Ryan Said of Breaking Bad, ‘It’s highly addicting, just like the meth on the show.’

Ryan Lee Carrol was quoted in the NaplesNews as saying the above quote in a September 28 article.

He was likely the envy of many “Breaking Bad” fans as he won a raffle, put on by Aaron Paul, to watch the finale of the series with the cast. He said, ““I think we’re going to be in Hazmat suits with [the cast],” and was very excited after discovering the raffle on Twitter and eventually winning.

“I guess he’s[Aaron Paul] going to pick us up in the RV they cook on the show in,” Carroll told NaplesNews.

2. Ryan Was Charged With 2 Felonies & a Misdemeanor Involving Drugs

Ryan Carroll @rlcarroll80 from Fort Meyers, FL has won the Omaze Raffel! See you at the airport Bitch! More winners to come. #BreakingBad

Ryan Lee Carrol was charged with “possessing a synthetic narcotic, a controlled substance without prescription, and keeping a shop or vehicle for dangerous drugs,” reports IBTimes.

HuffPo says Randy Hughes, Carrol’s neighbor said, “there were large amounts of mail and packages delivered to Carroll’s home. You knew something was up. They either had a very successful business, or they were up to something they shouldn’t be. Every day, FedEx deliveries.”

The bust was apparently a big one.

“It was kind of scary. I came home at about 6 p.m. and there were still about 10 cop cars and they had this big bread truck and they were bringing boxes and boxes of something out,” said another neighbor, Peter Ryther, to FoxNews.

Some are reporting that he was dealing synthetic marijuana, but it’s more fun to imagine that it was meth.

Much to the chagrin of many “Breaking Bad” fans, Florida PD seized the piece of epic BB paraphernalia (so to speak) from Ryan’s home.

Carroll had alluded to the HazMat suits earlier, when he won the contest, saying, ” “I think we’re going to be in Hazmat suits with the cast. It’s going to be crazy.”

4. You Can See Ryan’s Charges on the Lee County Sheriff’s Website

As you can see, his total bond is around $12,500 and is currently in custody. He also faces a probation violation.

5. In Other ‘Breaking Bad’ News, Its Creator Just Disclosed One Regret

Vince Gilligan recently told HuffPo that he has one minor regret involving the series: Jesse Pinkman’s teeth were too perfect. 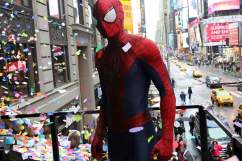 Loading more stories
wpDiscuz
0
0
Would love your thoughts, please comment.x
()
x
| Reply
The winner of a "Breaking Bad" contest who flew to Hollywood to watch the final with stars Bryan Cranston and Jesse Pinkman was arrested after a drug raid.