Jason Greenslate, 29, made his second appearance on Fox News this week because he is a musician living on food stamps. As part of the American Right’s crusade to portray people receiving government assistance as “mooches,” Greenslate was turned into the long-haired, guitar-playing, lobster-eating emblem of America’s misused tax dollars. Greenslate receives $200 a month from the government to pay for food.

Here is what you need to know about Greenslate and his influence on the food stamp debate:

1. Bill O’Reilly Re-Visited Him This Week

Greenslate returned to the news this week after conservative pundit Bill O’Reilly sent a popped-collar-polo-wearing journalist to speak with him about his lifestyle and whether he feels guilty for using taxpayers’ money.

O’Reilly starts the segment by discussing how much money the country spends on food stamps. He then and transitions to Greenslate being asked questions like, “What’s this look like to most people?” “Playing music is your job? That’s your job, not a hobby?” and “How do you think you’re contributing to the country right now?”

2. Fox News Initially Reported on Him in August 2013

Greenslate’s time in the spotlight began in August 2013 when Fox News ran the original segment about him and his food stamps, which you can watch above. Without providing any background about his life or financial history, Fox plunges its viewers into a lampooning of Greenslate’s life as he buys lobster with food stamps and spends his days drinking beers on the beach.

Greenslate has no permanent address and relies on help from his friends and food stamps as he attempts to get his music career off the ground.

According to his Facebook page, Greenslate was born, raised, and now lives in San Diego, California, where he graduated from Timberlake High School. The media attention also seems to give him an avenue through which he can get publicity for his band, Rattlife, which he discusses and wears T-shirts for in the interviews above.

The lobster-eating “Foot Stamp Surfer,” as he’s come to be known, is a symbol for conservatives to use to portray the perceived abuses in the system. In the video above, Bill O’Reilly and Fox’s Editor-at-Large discuss Greenslate and even call him a “rat.” While in the interview below, on the Roger Hedgecock Show, Greenslate discusses how de-contextualized his story was on Fox and sheds light on his financial status.

Jason Greenslate may be a single white man on food stamps who is not searching for employment, but he is certainly the exception when it comes to food stamps, and not the rule.

According to FeedingAmerica.org, 76 percent of all households receiving food stamps include a child, an elderly person, or a disabled person. Bill O’Reilly is correct that government spending on food stamps is increasing, but it’s not because the criteria have changed, it is because fewer people can afford food.

Mother Jones reports that saving money on food by using food stamps kept 4 million Americans out of poverty in 2012. 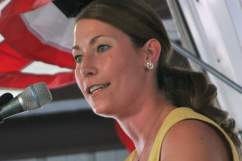