Right now in Hong Kong, pro-democracy students are in a tense standoff with police. Here’s what you need to know about the protests.

1. Hong Kong is an Autonomous Region of China

To fully understand the current situation in Hong Kong, one has to take a look at Hong Kong’s history.

Hong Kong gained its Special Administrative Region status in 1997 after it was turned over to the People’s Republic of China by Great Britain, who had ruled it as a Crown colony since 1842.

The policy was known as “One Country, Two Systems.”

The current situation in Hong Kong began when it was announced this summer that for the first time, Beijing would let the Hong Kong public vote for the city’s chief executive, the region’s top civil position, in 2017. But that Beijing would only accept candidates it had vetted

This did not resonate well with residents in capitalist Hong Kong who saw this as a breach of the “One Country, Two Systems” agreement.

Below is a graph by Hong Kong University showing how Hong Kong residents are falling in belief that Beijing will uphold its promise of the agreement.

The protests began last week with students and came to a spearhead this weekend when participants took up occupancy of government buildings and the city’s financial district.

Pro-democracy groups [moved] to disrupt the city’s Central financial district — where many big banks and other businesses are located — in a campaign known as “Occupy Central.”

Occupy Central began formally on Sunday, with thousands of protesters, many wearing eye and clothing protection, beginning a sit in around government buildings. Supporters want to force discussions, and even concessions, over Beijing’s influence on Hong Kong.

The protesters are calling it the “Umbrella Revolution” because they are using umbrellas to deflect tear gas attacks by police. 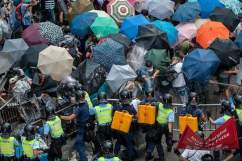 Umbrella Revolution: All the Photos You Need to See

Police responded to #OccupyCentral with pepper spray and tear gas.

According to the New York Times:

In a significant escalation of their efforts to suppress protests calling for democracy, the authorities in Hong Kong unleashed tear gas, mobilized riot police with long-barreled guns and closed a subway station Sunday to disperse crowds that have besieged the city government for three days. But thousands of residents wielding only umbrellas and face masks defied police orders to clear the area.

Critics have stated that Hong Kong authorities are overreacting to the peaceful protests.

But Hong Kong has gone on record that pepper spray and tear gas was just the beginning and that if protesters don’t go home, “officers would use a higher level of force.”

To help squash the revolution in Hong Kong, it’s being reported that Beijing has shut down access to various social media clients like Instagram to those in mainland China so they cannot know about what’s happening in Hong Kong. 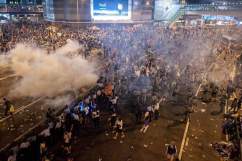