Brittany Renner is the model claiming 49ers quarterback Colin Kaepernick is the father of her child.

Kaepernick, who was linked to a sexual assault investigation in April, has indicated he thinks her claim is bogus.

Here’s what you should know about Renner and her possibly pregnancy by the NFL star.

1. She Posted to Instagram That She Was ‘Preggers by @kaepernick7’

The post on Renner’s Instagram, where she goes by the name “Bundles of Brittany,” has since been deleted. But this post about Kaepernick from October 1 has been left on her page:

In what seems like a response to Renner’s claims, Kaepernick Instagrammed the song cover for “Stop Lyin'” by Kevin Gates. He accompanied it with the comment “We don’t just call this my anthem now! Keep trying. #IDontGetTired #WhoDoYouLove #Se7enPounds.”

3. They Were Rumored to Be Dating in July

According to TMZ, the couple were dating in July for a short while. The pair also had a heartfelt interaction on Twitter back in January:

Terez Owens reported back in July that Renner had flown to San Francisco to be with Kaepernick. According to her Facebook page, Renner lives in Los Angeles. She also says that she studied at UCLA.

In June of 2014, Kaepernick signed a lucrative $126 million contract extension with the 49ers. So if the the baby is indeed his, he or she should be quite well looked after. 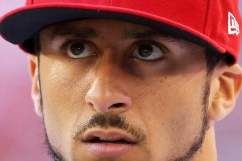