Kate Brown will be next governor of Oregon following the resignation of John Kitzhaber. She’s openly bisexual and is married to Dan Little. She’s been Oregon’s Secretary of State since 2008 and is a Democrat. Brown and Little live together in Portland. Under state law, the Secretary of State takes over if the governor dies or resigns. She will remain in office until the next general election in 2016.

Here’s what you need to know about Brown and her husband:

1. Dan Little Has 2 Kids From a Previous Relationship

The couple live in Portland’s Woodstock neighborhood together with Dan’s children from a previous marriage, Dylan and Jessie. Little and Brown got married in 1997, reports Oregon Live.

2. Brown Will Be the First Openly Bisexual Governor in the U.S.

Brown will be the first openly bisexual governor in the U.S. In 2014, Mike Michaud, who is openly homosexual, ran for governor in Maine but lost to incumbent Tea Partier Paul LePage. Previously, one-time New Jersey’s Governor Jim McGreevey came out as a homosexual prior to his resignation in 2004. Little, 54, began identifying as a bisexual during the 1990s.

Brown celebrating signing of two bills protecting gay rights into law at the Oregon State Capital in May 2007. (Getty)

Dan Little told Oregon Live in 2012 that politics was in his wife’s blood. This was during a time Brown’s record as Secretary of State was under scrutiny. Little told the website, “I’ve seen politics eat people alive. A campaign like this they never recover from it.” When asked if his wife might not recover, Little replied, “No way.”

4. Little Is a Fantastic Photographer

According to his Facebook page, Dan Little is an active outdoorsman and photographer. All of his photos show him out mountain biking or hiking. He maintains a website showing his photos taken from around the U.S. and beyond. Kate Brown appears in most of his pictures. The couple also follow folk band True North around Oregon.

5. Brown Was Involved in a Bizarre Incident With the Former Governor This Week

Governor John Kitzhaber has resigned following numerous ethics probes involving the role the former governor’s wife was playing in state politics. His girlfriend, Cylvia Hayes, and Kithaber are being subjected to an investigation from the Oregon Department of Justice and the FBI relating to criminality. The governor resigned on February 13. On February 10, it was reported that Kitzhaber had asked Brown to return from Washington D.C., where the Secretary of State was attending a conference.

He told her that he was about to resign, reports Oregon Live. When she returned to her home state, she says the governor bizarrely asked her why she had returned from D.C. and didn’t mention his resignation comments. 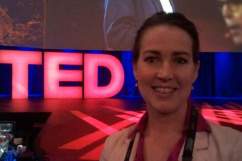 Read More
5 Fast Facts, Breaking News, LGBT, Politics
Kate Brown will be Oregon's next governor and the first bisexual governor in the U.S. after the resignation of John Kitzhaber. Dan Little is her husband.