A new report purports to have revealed what the average penis length is for a man. The average is less than what was previously thought, according to the study, which is brilliantly titled “Am I Normal?” Even if you don’t measure up, the study also dismisses the notion of bigger always being better.

1. The Average Length of an Erect Penis Is 5.16 Inches

The study, which took into account the penis measurements of over 15,000 men, determined that the average flaccid penis length is 3.61 inches. That’s about half the size of a dollar bill. Erect, the average length is 5.17 inches, according to the study, which was published on March 3 in the British Journal of Urology.

The project’s lead author, Dr. David Veale, a psychiatrist in London, told NBC that “only 15 percent of women say that erect penis size is important, and erect girth is generally more important than length.” This is because the “most sensitive part of the vagina is in the outer regions.” The study showed that 85 percent of women were happy with their man’s penis size, whereas only 55 percent of men were satisfied with their own penis size.

3. The Study Says Racial Stereotypes About Penis Size Are Nonsense

Russian monk Rasputin was rumored to have an 11 inch flaccid penis. (Getty)

Dr. Veale said in the paper that the goal of such a large project was to build “nomograms” — graphs that takes into account the average measurements from all ages and races. Dr. Veale said that the graphs were designed to provide “reassurance about what a normal size of a penis is.” The study also showed that previous research projects into penis sizes that showed people of African extraction to have larger phalluses were no longer credible. The paper said that those studies did not meet modern criteria.

4. There Is a Problem Among Men With ‘Small Penis Syndrome’

So-called “small penis syndrome” is also known as “small penis anxiety,” and it’s a real thing. The study says that men across the world go to urologists complaining of small penises even though they fall well within the average. The study’s definitive graphs are trying to provide reassurance to men who suffer from such anxiety. Dr. Madeline Castellanos, a sex therapist, told NBC News, “Some men that have a smaller penis size are much more confident in their love making, find different positions or motions that actually give a lot more stimulation than can some men who have large penises.

5. There Are No Potions or Pills That Will Increase Penis Size

Dr. Veale, speaking to the American Association for the Advancement of Science, said, “There are no effective potions or pills” that will increase penis size.

Debra Herbenick, a behavioral scientist at Indiana University, told the AAAS that spam emails and the prevalence of men in pornography with oversized genitalia have increased men’s insecurities about their penis size. She added, “It still just strikes me how many men have questions and insecurities and concerns about their own penis size. We actually do need good data on it.” 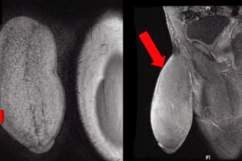