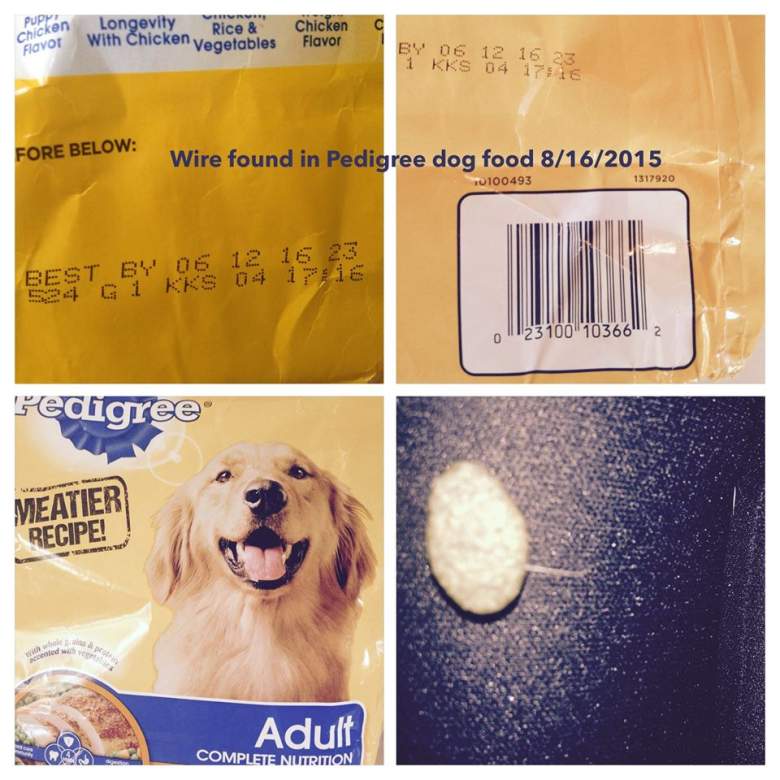 Concerned dog owners around the country are firing off photos showing what might be wires sticking out of Pedigree dog food kibble. (Facebook/Marilyn Roach Allen)

Dog owners across the country are complaining that they’re finding wires in their Pedigree brand dog food kibble. The reports started in Ohio and Texas and grew from there. Pedigree has responded that the kibble is safe and the wires are just fibers from meat or bone meal. Dog owners are not convinced and are posting angry messages on Pedigree’s social media accounts. Concerns are spreading to other brands like Purina and Iams. Snopes currently has the rumor listed as “undetermined.”

1. The Reports Started in Ohio and Texas and Then Spread to Dog Owners Across the Country

One of the very first photos that sparked the debate shows a stiff wire poking out of a piece of Pedigree kibble. (Facebook/Missie Carter)

The reports about Pedigree dog food having wires in it started with dog owners in Texas and in Columbus, Ohio. Missie Carter of Columbus left a comment on WSYX ABC 6’s website with a photo (pictured above), showing the wire she found in her dog food. She said her dog hadn’t been eating and had been feeling sick and she didn’t know what was wrong. That’s when she checked her Pedigree dog food and found a wire embedded in one of the kibble grains. She said she found more wires throughout the food.

2. Some Pet Owners Say the Wires Are Actually Pig Hairs

Another photo shared by a dog owner in Dallas. This was one of the first photos that sparked the wave of concern about wires in Pedigree kibble. (Facebook)

Some people are saying the alleged wires are actually pig hair, which can be thick and “wiry,” easily mistaken for actual wires. It’s not confirmed whether this explanation is correct or not, but some pet owners are saying that explanation is not a huge comfort. One Pedigree customer said her chihuahua had been very ill and now she’s wondering if it was because of the food.

3. Many People Are Leaving Comments on Pedigree’s Social Media Pages About the Food

Many angry pet owners are leaving comments on Pedigree’s Facebook page about the findings. One owner, James Gardner, wrote to Pedigree on Facebook: “I’m never going to buy your dog food again and I will make it my personal mission to make sure no one I know buys it either!!” Another pet owner, Marilyn Roach Allen, said that the wire was stiff and sharp and could easily cause damage in a dog’s intestines. She said she couldn’t believe it was just a fiber.

If anyone feeds their dogs pedigree dog food there are small black wires in the food which can harm your animal?? pic.twitter.com/W52Xte1XDs

Pedigree has responded on its Facebook page to comments, with representatives saying that the fibers are normal. A recent post by Pedigree stated that their team conducted testing on the kibble and found all the fibers were from meat or bone meal, such as pig hair. The company said there were no reasons to be concerned about safety, but concerned dog owners can call 1-800-525-5273 between 8 a.m. and 4:30 p.m., M-F, or message them directly on Facebook. Meanwhile, customers are saying the wait time when calling Pedigree is far too long. One poster, Bailee Moody, said on Facebook that her mother called Pedigree and was on hold an hour with customer service, ultimately never able to reach anyone.

5. Dog Owners Are Reporting Wires in Other Dog Food Brands, Including Purina and Iams

The concern about the dog food has grown, as dog owners are posting similar findings in other brands. Nathan Khaligh posted on Twitter that he found wires in his Iams food. Others have reported similar findings in Purina brand food, but the brunt of the concern remains with Pedigree. Snopes has the rumor listed on its website and the verdict is “undetermined.” Snopes said that the reports vary as to what the fibers looks like: some say plastic, some say metal. There have been no reported incidents of contamination in specific Pedigree lots. The only precedent is a 2014 recall by the FDA of certain brands of Pedigree dog food for containing metal fragments, but these were loose in the bags of food and not embedded in the kibble.

Loading more stories
wpDiscuz
8
0
Would love your thoughts, please comment.x
()
x
| Reply
A Texas dog owner thinks she found wires in her Pedigree dog food, sparking many additional reports around the country. Should you be worried? Find out here.