Patty in Hawaii with her son Kevin and his fiancee. (Twitter)

Patty Duke has three sons, Sean Astin, Mackenzie Astin, and Kevin Pearce. Although her two oldest sons are actors and very much in the public eye, her youngest son tends to stay more out of the spotlight.

Patty with her husband Michael and their adopted son Kevin, and Michael’s grandchild Charley. Charley is his daughter CharLene’s son. (Twitter)

In 1986, Patty married drill sergeant Michael Pearce and they were married until she passed away in 2016. In 1988, they adopted a son, Kevin, who was only a few days old. Kevin has joked to media that some people wonder how Patty gave birth to someone as tall as him, before they realize that he’s adopted. Kevin is currently engaged to fiancee Jenn. They’ve been close for years and Patti often shares photos of family vacations with her son and his fiancee.

Kevin and Patty Were Very Close, and Kevin Is Engaged

Kevin Pearce is very close to Patty and her other two sons. (Twitter)

Kevin is different from his brothers in that, for the most part, he stays out of the spotlight. He typically only appears on social media when his mother shares photos of her time with him and his fiancee, Jenn.

It’s important to note that her son, Kevin Pearce, is not the famous snowboarder Kevin Pearce. They are two different people. 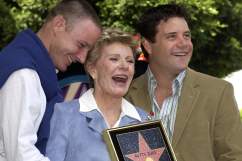