Trump on #OrlandoShooting: If people in that room had guns, you wouldn't have had the same tragedy. https://t.co/Ctp9oFLbTQ

During an appearance on CNN this morning, Donald Trump continued his criticism of President Barack Obama for not blaming the mass shooting in Orlando, Florida on “radical Islam.” Trump also suggested that if people “on the other side” in the Pulse nightclub had guns, there would have been less victims.

“If you had guns on the other side, you wouldn’t have had the tragedy that you had,” Trump told CNN’s Alisyn Camerota. “If people in that room had guns, the bullets would be flying in the opposite direction right at his head.”

Camerota tried to correct Trump by telling him that there was an armed security guard in the club, but he continued on.

“You wouldn’t have had the same tragedy that you ended up having,” Trump said. “And nobody knows how bad that tragedy is because I think probably the numbers will get bigger and bigger and worse and worse. I hear that the injured are so gravely injured. But if you had guns in that room, even if you had a number of people with… having it strapped to their ankle or strapped to their waist, bullets could have flown in the other direction right at him. You wouldn’t have had the same kind of tragedy.”

The shooting at the gay nightclub Pulse was the worst mass shooting in U.S. history, with 49 victims and 53 others injured. The gunman, Omar Mateen, was killed by a SWAT team at the scene. He reportedly called 911 before the shooting to declare allegiance to ISIS. The shooting has been considered a terror attack.

On Sunday, Trump was quick to criticize Obama and even called for him to resign for not mentioning the words “radical Islam.” He also suggested that Hillary Clinton should drop out of the race for not using those words either.

Trump will deliver another speech today on terrorism, national security and immigration. 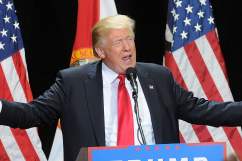 READ: Trump Calls for Obama to Step Down After Orlando Shooting

Read More
Donald Trump, Florida, mass shooting, Orlando, Pulse
Follow Heavy ↓
wpDiscuz
0
0
Would love your thoughts, please comment.x
()
x
| Reply
Donald Trump said on CNN this morning that if anyone had guns in the Pulse nightclub at the time of the shooting, there would not have been as many victims.