After being criticized for a tweet showing Hillary Clinton next to the Star of David and piles of money, Donald Trump defended himself on Wednesday evening by referencing the Disney film Frozen.

Trump posted an image of a Frozen sticker book with a star on the cover, accusing his opponents of being dishonest about the original tweet containing a Star of David. He claims that it was simply a regular star or a sheriff’s badge.

Where is the outrage for this Disney book? Is this the 'Star of David' also?
Dishonest media! #Frozen pic.twitter.com/4LJBpSm8xa

This Frozen picture had been floating around on Twitter throughout the day, primarily being reposted by Trump’s supporters and by Twitter trolls mocking those on the left who were offended by Trump’s original tweet. That now infamous Hillary Clinton Star of David image was apparently taken from an alt-right Twitter account and was not created by the Trump campaign itself. It was also popularized by a white supremacist message board over a week earlier. 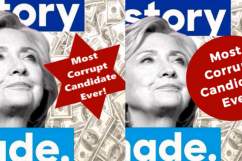 Within moments of Trump’s tweet, Hillary Clinton responded with a Frozen reference of her own.

Do you want to build a strawman? https://t.co/AoeNTJOGpo

This follows an Ohio rally during which Donald Trump defended the Star of David picture, saying that his campaign never should have deleted it and that they should have doubled down. Within three hours of sending the photo out on Saturday, Trump’s campaign deleted the tweet and posted a new version with the star having been replaced with a circle.

Trump also said during his Ohio speech that those who criticized him for the image are the real racists.

“And it actually looks like a sheriff’s star, but I don’t know,” Trump said. “And behind it they had money. ‘Oh, but there’s money behind!’ So actually, they’re racially profiling.”

Trump’s campaign manager, Daniel Scavino, says that the campaign took the Star of David image from an anti-Hillary Twitter account.

“The social media graphic used this weekend was not created by the campaign nor was it sourced from an anti-Semitic site,” he said. “It was lifted from an anti-Hillary Twitter user where countless images appear.”

Scavino went on to blame Microsoft for not having a sheriff’s badge shape available for use, saying that this is why he selected the Star of David (even though Scavino says that he did not create the image).

In his Ohio rally, Trump also offered the defense that he is not anti-semitic because daughter Ivanka is Jewish, as are his grandchildren and stepson. Daniel Scavino made similar comments on Twitter.

For the MSM to suggest that I am antisemite is AWFUL. I proudly celebrate holidays w/ my wife's amazing Jewish family for the past 16 years.