Martina Hingis is a female tennis player who dominated the 1990s. (Getty)

With a 548-133 career singles record to accompany her major victories, it’s hard not to call Martina Hingis one of the best female tennis player’s of all time, which is why TENNIS Magazine ranked Hingis 22nd in its list of the 40 Greatest Players of the magazine’s 40-year history.

Hingis was born in what is now known as Slovakia on September 30, 1980. Her parents divorced and her mother moved her daughter to Switzerland, where she was raised.

She entered pro tennis in the 1990s and was the top women’s tennis player in the world in the late 1990s.

Before she turned 19 years old, Hingis had won all five of her major singles titles.

According to Rio2016.com, Hingis plans to participate in the 2016 Olympics with Roger Federer:

Martina Hingis, 35, and Roger Federer, 34, have already started to make plans to take part in the mixed doubles, depending on their position in the international ranking, to be defined by 6 May 2016.

The only other time Hingis participated in the Olympics was in 1996 in Atlanta. according to WTA, she will also play with Belinda Bencic, and it is her dream to win an Olympic gold medal:

Among the frontrunners to pair up with Hingis in Rio will be Belinda Bencic, who partnered Hingis to victory in the decisive rubber of Switzerland’s recent Fed Cup win over Germany.

1. She Has 5 Grand Slams Titles 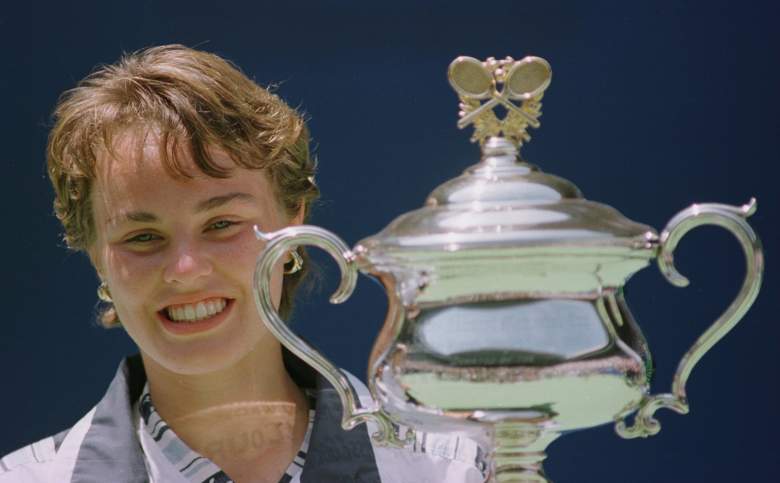 Martina Hingis of Switzerland poses with the trophy after defeating Mary Pierce of France to win the Ladies final of the Ford Australian Open in Melbourne. (Getty)

Hingis has one five solo Grand Slams: three Australian Opens, one Wimbledon and one U.S. Open. She has over $17 million in prize money, according to her bio on Encyclopedia.com. Her last Grand Slam win was in 1999 at the Australia Open.

The International Tennis Hall of Fame says that Hingis became the youngest Grand Slam champion in history at 15 years and 9 months old in 1996–she won the doubles title at Wimbledon–a record she still holds. They add that Hingis won the 1997 Australian Open singles championship at 16 years and 3 months old, become the youngest Aussie champion in history. That March, Hingis rose to No. 1 in world rankings and became the youngest ever to hold that position, says the International Tennis Hall of Fame. She won at the Wimbledon Championships three months later.

As a doubles player, Hingis has won all four Grand Slam tournaments in a calendar year–with two different partners no less, according to AskMen.com.

2. She Started Competing at the Age of 4 and Turned Pro at 14 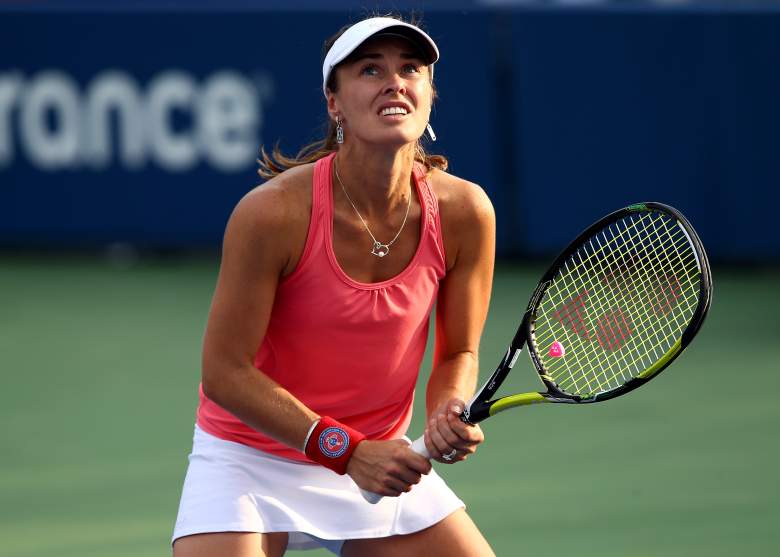 Martina Hingis has been playing tennis professionally since she was a pre-teen. (Getty)

Encyclopedia.com says, “Hingis first picked up a racket at the age of two, using a full-sized wooden racket with the grip cut away so she could get her small hand around it.”

At the age of three, the Hingis family moved to Roznov, where she began playing on tennis courts. She participated in her first tournament at the age of four; she lost 12-0 to an older player, says Encyclopedia.com.

At the age of 12, Hingis won the junior French Open. “Two years later, she took advantage of the lax age restriction rule on tour and joined as a professional,” says AskMen. Hingis turned professional in 1994, just four days after her fourteenth birthday, says Encyclopedia.com. At the end of the year, Hingis broke into the top 100.

3. Her Mother, Melanie Molitor, Has Coached Her Most of Her Career 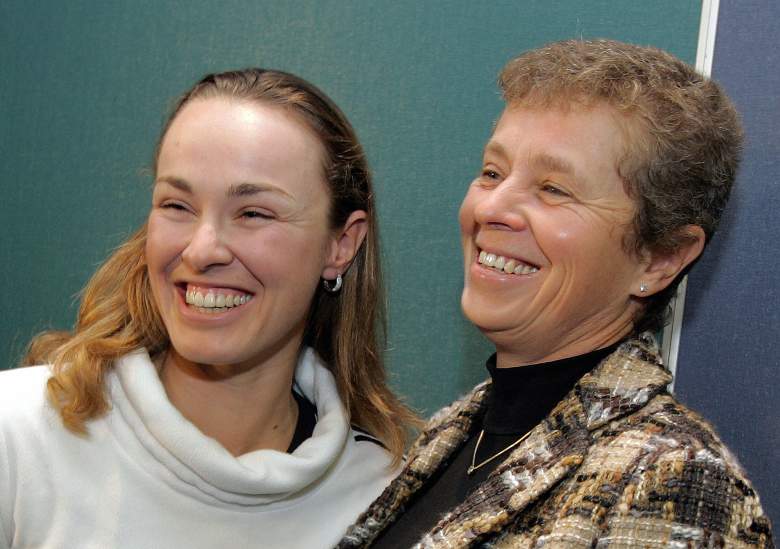 Hingis and her mother, who has also coached her, Melanie Molitor. (Getty)

Hingis’ mother, Melanie Molitor, was an eighteen-year-old ranked tennis player from Roznov when she married Hingis, says Encyclopedia.com. Her mother passed on her ability to Martina, and she was sure her daughter would be a tennis star. She even named her after the most celebrated female player at the time of her birth, Martina Navratilova, says CNN.

Navratilova represented the type of player and person Molitor wanted her daughter to become.

Molitor has coached Hingis throughout most of her career.

Hingis has coached a bit as well, most recently Wimbledon finalist Sabine Lisicki. Lisicki split from Hingis, however, in 2014, due to “different concepts” on her tennis, says the Sydney Morning Herald. She has also coached Belinda Bencic and Anastasia Pavlyuchenkova.

4. Hingis & Her Partner Sania Mirza Are Ranked No. 1 in Women’s Doubles 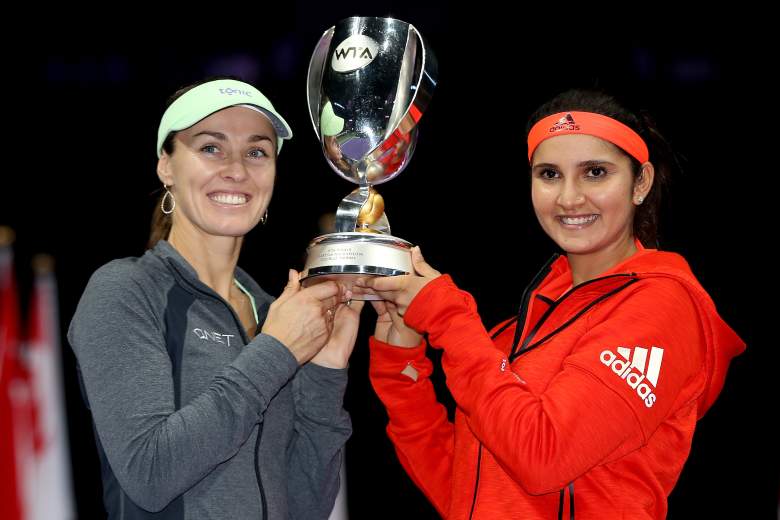 Hingis and her partner Sania Mirza hold up the Martina Navratilova Doubles Trophy after defeating Carla Suarez Navarro and Garbine Muguruza of Spain in the doubles final match during the BNP Paribas WTA Finals at Singapore Sports Hub on November 1, 2015 in Singapore. (Getty)

Hingis and Sania Mirza, who has been beat by Hingis a number of times, teamed up in 2015 for doubles. They teamed up for the first time in March, 2015 at Indian Wells and won the title.

According to WTA, the team is currently ranked number 1 in women’s doubles.

Hingis and Mirza, who is from India, won Wimbledon last year. However, at this year’s Wimbledon, which is happening now, they aren’t doing as well, according to ESPN:

The reigning champions lost 6-2, 6-4 to fifth seeds Timea Babos and Yaroslava Shvedova in the women’s doubles quarterfinals on No. 1 Court at the All England Club Thursday. The defeat comes after a loss in their first match at the Wimbledon warm-up event in Eastbourne, after they saw their bid to hold all four majors ended at the third-round stage of the French Open in May.

Neither have confirmed whether or not they will play together next year. 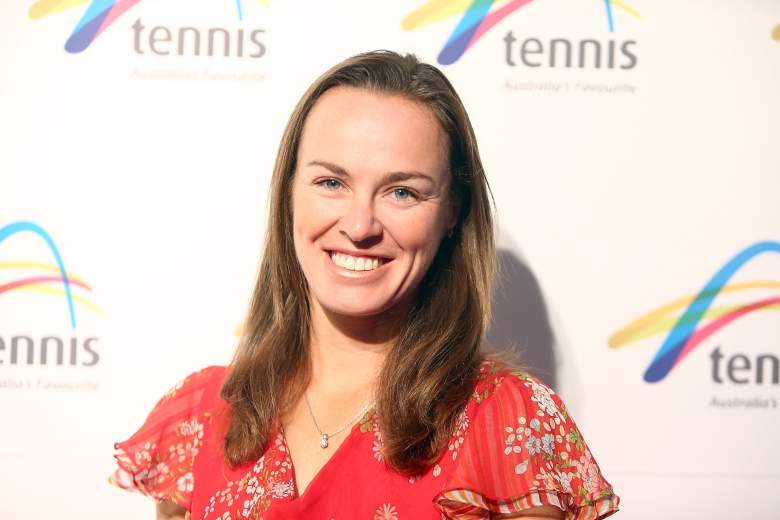 Hingis enjoys horseback riding when off the court. (Getty)

Ankle and hip injuries forced Hingis to retire in 2003, according to the International Tennis Hall of Fame. However, like it is for many athletes, retirement didn’t last long. “She returned to competitive tennis at the start of 2006 and won the Australian Open mixed doubles title (with Mahesh Bhupathi) and the Italian Open,” says the International Tennis Hall of Fame. That year she also received the Laureus World Sports award for comeback of the year.

Retirement wasn’t done with her yet, however, and just one year later, in 2007, Hingis revealed she was under investigation after testing positive for cocaine at Wimbledon, according to the International Tennis Hall of Fame. Hingis claimed her innocence and decided to retire again rather than fight the charges.

In January 2008, she was suspended for two years by the International Tennis Federation.

Surprise, surprise: Hingis returned to professional competition once again in 2013, this time strictly as a doubles player and a coach.