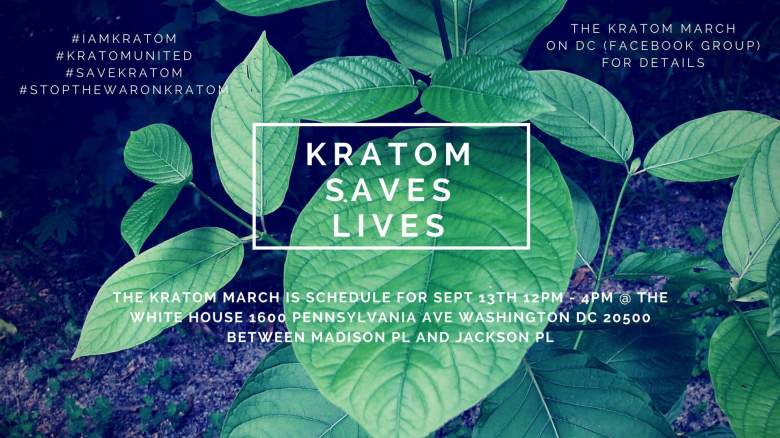 The Drug Enforcement Agency (DEA) announced August 31 that they plan to ban kratom in the United States as of September 30, causing panic and outrage to the thousands who use the leaves, which are closely related in makeup to the coffee plant. They’re specifically looking to outlaw the compounds mitragynine and 7-hydroxymitragynine found in in the herb.

Advocates of kratom argue that the leaves do not make you “high” per se, but rather offer a great alternative to traditional and addicting pharmaceutical pain relief. It has also been used to treat psychological disorders and those coming off of opiates, taking the edge off from the excruciating withdrawal process.

Heavy spoke with several advocates of the plant, which is mainly used in powder and leaf form for tea, and was overwhelmed by responses of those wanting to share their experiences. Consumers of kratom cannot be categorized into one group and include veterans, lawyers, teachers, health care workers, the young, elderly and just about everyone in between. You can see more of this diversity firsthand by clicking this gallery with corresponding stories.

Many believe that by taking away this seemingly harmless herb, innocent and valuable members of society will lose their lives in the process.

1. Those in Possession of Kratom Could Face the Same Penalties as Possessing Heroin & Other Heavy Drugs

According to Dale Jerue of the National Kratom Coalition, “Found primarily in South East Asia, kratom is a relative to the coffee tree. The pain relief effects found in kratom are produced by alkaloids found in the leaves. Historically, because of its reported analgesic and energizing effects kratom was used for centuries by farmers and tribes people in the region.”

Consumers of kratom emphasize the fact that the chance of overdosing on the plant is extremely low, if not impossible. That’s because your body forms a natural reaction of vomiting before you would ever likely be able to consume too much.

However, the DEA “argues that public comment is unnecessary” before banning kratom, as reported by Forbes. In regards to this news, Matt Cameron stated:

Even in the face of all of this — including, again, federally-funded research recommending further study — the DEA has had the audacity to declare that the conversation around kratom is over and that users should expect to be subject to arrest.

@DEAHQ has heard from 100s of #kratom supporters in the past 2 days about the proposed scheduling action; we thank you for the feedback.

According to the DEA’s website, “Schedule I drugs, substances, or chemicals are defined as drugs with no currently accepted medical use and a high potential for abuse.” This directly contradicts the thousands who have reportedly found medical relief from kratom.

Examples of drugs fitting the Schedule I category include heroin, LSD, marijuana and ecstasy.

DEA calls Kratom an "opioid" when it's not an opioid. They literally don't know what the drugs are that they decide to ban.

If the ban goes through, Kratom could end up being penalized at the same level of drugs such as heroin that do actually kill people, whereas kratom alone has never caused death, as reported by kratommarchdc.com.

Many believe pharmaceutical companies are to blame, as they receive no financial gain from those consuming natural plants which are both inexpensive and readily available. They also believe the drugs offered, such as Oxycontin, have a much higher potential for abuse and overdose deaths.

“If a person who switches from methamphetamine to kratom or what have you is considered trading one addiction for another then what do you call people on methadone and Suboxone?,” a kratom vendor who goes by Dan H. told Heavy.

2. The DEA is Citing Poison Control as a Reason to Ban the Plant

As an example of the supposed risks of kratom, the DEA cited a CDC study published this summer that counted 660 poison control calls during a five-year period from 2010 to 2015 on behalf of people suffering adverse reactions to the herb or teas made from the plant material.

In stark contrast, poison control centers receive a call every 45 minutes of every day “about a child who has ingested or otherwise been exposed to laundry detergent packets,” Gary Smith, MD, director of the Center for Injury Research and Policy at Nationwide Children’s Hopsital in Columbus, Ohio told Forbes.

With that logic, why aren’t laundry detergent pods being banned?

Interestingly enough, when you enter the word “kratom” into the search field of The National Capital Poison Control Center, you’re brought to a page describing “spice” and “bath salts,” with no mention of kratom. To put kratom into that category suggests no real knowledge on what the herb is made up of or the actual effects that it has.

Kratom, after all, is a plant and not a man-made chemical. The American Kratom Association stated:

Kratom is not a drug. Kratom is not an opiate. Kratom is not a synthetic substance. Naturally occurring Kratom is a safe herbal supplement that’s more akin to tea and coffee than any other substances.
Kratom behaves as a partial mu-opioid receptor agonist and is used for pain management, energy, even depression and anxiety that are so common among Americans. Kratom contains no opiates, but it does bind to the same receptor sites in the brain. Chocolate, coffee, exercise and even human breast milk hit these receptor sites in a similar fashion.

3. The Effects of Kratom Cannot Be Compared to Heroin or Other Heavy Drugs

Kratom consumers argue that the ban would be absolutely ludicrous considering you cannot even remotely compare what you get out of it to drugs such as heroin.

“I personally, compare it to the best cup of coffee I’ve ever had. I don’t feel high, foggy, out of it. I feel ready to take the world on. No pain, less anxiety. I just feel…OK,” Dan H. told Heavy.

While some have claimed to have become dependent on kratom, most acknowledge that withdrawal of the herb, if any, is extremely minimal. They also say they don’t feel the “need” like an addict feels a need for heroin or methamphetamine.

“I don’t jones for a next fix, I only need it when the pain is too much,” Dereck Connors said.

Being the DEA means obsessing over the fact that someone somewhere just ingested something that made them feel good. https://t.co/F9mJ48v2T0

Leo Nargeny, owner of Amazing Kratom, told Heavy that “Kratom helps people become sober and clean off drugs. The polar opposite of heavy drugs or prescription medication such as oxycotin.” Nargency believes the people responsible for trying to ban kratom “must not believe in God.” He said:

You cannot make leaves of any tree illegal. People with money believe they are in a position of power and unfortunately lose sight of reality. This is a major issue. This distorted perception of reality is the root of the problem. This is true of all naturally occurring plants. They are putting a ban on God.

“Look at all these heroin overdoses…I mean we’re holding the golden card but we’re the enemy. Government and the citizens should be embracing us,” Dereck Connors stated.

Stand Up for Your Freedom to Choose Herbs Over Pharmaceuticals to Support Your Health: https://t.co/34ORfLrqI0 #iamkratom #kratom

Kratom isn’t limited to helping pain disorders. Many find relief from other ailments such as anxiety. Attorney Matt Cameron wrote in his blog:

For the first time in my life, I have been able to start conversations with strangers in public. I have not only sincerely enjoyed going to large parties, but found myself not wanting to leave. I have made sustained, steady eye contact with other humans while also effortlessly keeping a conversation going with them. I have finally come to understand what people mean when they say that they are ‘working a room.’ I have found a mental space in which I can thrive in settings and situations in which I would have previously risked total mental shutdown.

4. Alternatives May Have Adverse Effects

With a ban on kratom, those who use the plant for medicinal purposes will undoubtedly find alternatives to healing, and that scares the community. Many have gotten off of opiates and other mind-altering and addictive drugs with the use of kratom, and say their pain is gone, along with the awful attributes of pharmaceuticals. If their pain or other disorders can’t be treated with kratom, they may end up in bad situations they found themselves in before they found the herb.

Very cool! Now my friend who used kratom to get off prescription pills can become an addict again https://t.co/DI7QLazO4F

It is disheartening to see the lies the DEA is spreading about kratom. I have never felt “high” from it like they claim, and have never ever heard of anyone hallucinating on it like they claim. The only reason they are banning it I believe is that the big pharmaceutical companies can’t make money off of it and it works so well to treat a myriad of symptoms that they don’t want it cutting into their profit margin. I am terrified of what’s to come when this ban goes into effect. It is a shame that people’s health and well being are being compromised just so the pharmaceutical companies can get more people hooked on their chemical concoctions and to pad their pocket books.

5. A Petition Has Been Set Up & a March to Washington DC Is Planned

The sense of community of kratom advocates is refreshing. The group has come together and are stronger than ever in doing what they believe is right. A petition has been set up to help stop the ban, and you can sign here. The page, with sources cited, reads:

Schedule I drugs, substances, or chemicals are defined as drugs with no currently accepted medical use and a high potential for abuse. This is not true for Kratom, it has been shown numerous times in reports from users to help recovering Opiate addicts, treat pain, combat depression and anxiety, and much more. Deaths that involve Kratom being a persons’ system have always been from the result of mixing Kratom with other drugs, rather than Kratom alone. In states that banned Kratom, Alabama specifically, opiate usage and deaths went up after Kratom was banned in the state. Please stop the DEA from scheduling Kratom as Schedule I, there are many people who will suffer from this.

Please do not make Kratom a Schedule I Substance!https://t.co/ygVIZy9QU8

A march to the White House is also planned. “We the people are leading the charge to march in front of The White House to support Kratom and prevent the DEA from labeling Kratom as a Schedule I Substance. Meet us at The White House 1600 Pennsylvania Ave Washington D.C. on Tuesday, Sept. 13th @ 12:00 Noon,” the website says. According to the page:

We have spoken with many people who have been advised by lawyers that the most effective way to combat this is by having each individual who has a care for this cause to contact your congressman and explain the action going on and the benefits you have had with Kratom, how much the take away of this herb would affect your life, never the less make everyday people felons at months end. What we are trying to accomplish is anyone in State legislation, (congress) do what is called a “demand Letter” to the DEA on this issue. Congressional action is needed to show the lies and false science issued about this plant in order to protect big pharmaceutical company. It is important to call in a polite manner and just share your story in a positive way.

Loading more stories
wpDiscuz
159
0
Would love your thoughts, please comment.x
()
x
| Reply
The DEA has announced intentions to ban kratom as of September 30, and advocates of the herb are desperate to get the truth out. Read more on the ban, what kratom is and why thousands are upset here.