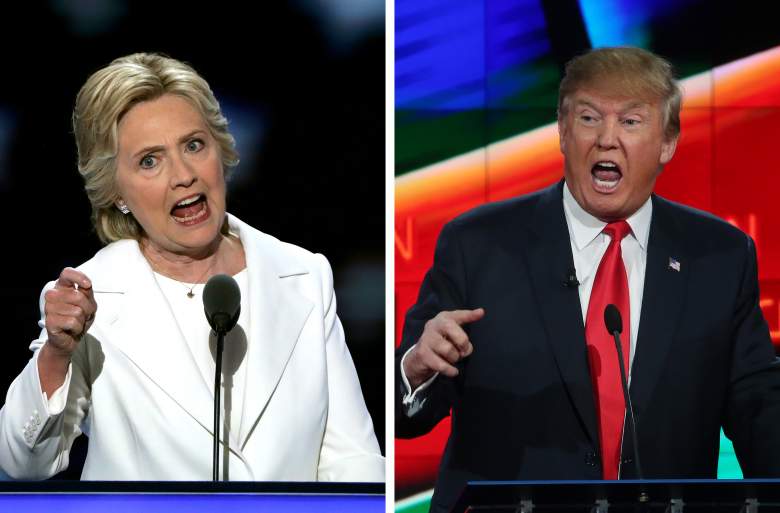 Donald Trump and Hillary Clinton faced off Monday night in the first of three televised debates at Hofstra University.

NBC News’ Lester Holt moderated the 90-minute debate, which analysts — and betting markets — largely scored as a win for Clinton.

Read on for a recap of the debate, and vote in our poll at the bottom of the post on who you think won the debate.

"Donald, it's good to be with you," Hillary Clinton says during her first #debatenight answer https://t.co/1qowNjCLcA

Clinton received the first question, which was decided by a coin flip.

The former secretary of state was asked directly why she would be a better choice than Trump. The Democratic nominee highlighted concerns over the economy and outlined her policy proposals.

“The central question in this election is really what kind of country we want to be and what kind of future we’ll build together,” she said.

Clinton added that she intend to build “good jobs,” while making the economy “fairer.” She discussed her intent to create equal pay, paid family leave, as well as pay and profit sharing.

“You have to judge us — who can shoulder the immense, awesome responsibilities of the presidency?” she said. “I hope that I will be able to earn your vote on Nov. 8.”

In Trump’s opening statement he spoke of jobs “being stolen from us,” and focused on the need to keep jobs in the United States.

He emphasized that American companies need to to be stopped from outsourcing overseas.

“Our jobs are fleeing the country. They’re going to Mexico, they’re going to many other countries. You look at what China is doing to our country in terms of making our product — they’re devaluing their currency, and there’s nobody in our government to fight them, and we have a very good fight, and we have a winning fight. Because they’re using our country as a piggy bank to rebuild China, and many other countries are doing the same thing.”

Clinton responded to Trump’s opening remarks by contrasting Trump’s experience to her own.

“Donald is very fortunate in his life, and that’s all to his benefit… he borrowed $14m from his father, he really believes the more you help wealthy people, the better off you’ll be.”

“We need to have smart, fair trade deals,” she added.

Clinton said that Trump’s proposal amounts to “trickle-down economics all over again.”

“I call it Trumped up, trickle down,” she said.

Holt asked Trump how he can bring back American manufacturing.

Trump responded: “Don’t let the companies leave… ‘You say, fine… if you think you’re going to make… whatever you make and bring them into our country without a tax, you’re wrong.'”

Trump said he’d place a substantial tariff on imported goods, which he said would “stop them from leaving.”

Clinton says, “Let’s stop for a second and remember where we were eight years ago.”

Trump attacked Clinton on her plan to improve the economy and create jobs: “You’ve been doing this for 30 years. Why are you just starting to think about this right now?”

Clinton said, “Well, actually, I have thought about this quite a bit. … I think my husband did quite a good job in the 1990s…Incomes went up for everybody… manufacturing jobs also went up in the 1990s, if we’re actually going to look at the facts.”

Trump continued to go after Clinton:

He accused Clinton of supporting TPP. “You called it the gold standard,” he added.

“That is just non-accurate,” Clinton responded. “Well, Donald, I know that you live in your own reality, but that was not the facts…”

Trump pressed Clinton on the issue: “Was it president Obama’s fault?”

“There are different views about our country, our economy and…”

Clinton responded, “I do. I wrote a book about it. … we have a very robust set of plans.”

Clinton said that Trump’s tax proposals would not incentivize companies to return their profits to the U.S.

“When I look at what you have proposed, you have what is called now the Trump loophole,” she said, implying that it would personally benefit him.

Trump made an attack against Clinton about how to defeat the Islamic State.

Clinton countered that she does have a plan to combat ISIS. Trump responded that she is broadcasting her plan on her website.

Donald Trump: I will release my taxes when Clinton releases her deleted emails https://t.co/GOKNpNBCR1 #DebateNight https://t.co/qeBjaLk4yk

Holt asked Trump why he hasn’t released his tax returns. Trump said that he’s under a “routine audit” by the Internal Revenue Service.

Trump then said he would release his when Hillary Clinton releases 30,000 personal emails deleted from her private email server.

Trump on Clinton's email controversy: "That was not a mistake" https://t.co/iXIwDaIPem #Debates2016 https://t.co/6ZHwtvN6nt

“I made a mistake using a private email,” Clinton said.

“That’s for sure,” Trump responded.

"We have to tackle the plague of gun violence," Clinton says. #debatenight https://t.co/k7b4I5CZBm

The debate turned to race relations in the United States.

She cited the shootings of black men by police in Tulsa and Charlotte. She outlined her plans for better training for law enforcement, and a criminal justice reform bill. She also called for stronger background checks to limit firearms access to people who “shouldn’t have them.”

Clinton said, “We’ve got too many military-style weapons on the streets. In a lot of places, our police are outgunned…we need to keep guns out of the hands of those who’d do harm…

“There are things we can do and we ought to do it in a bipartisan way.”

Holt followed up by asking Clinton: “Are you saying that police have an implicit bias against black men?”

She responded, “I think the implicit bias is a problem for everyone, not just police… too many of us in our great country jump to conclusions about each other.”

"We need law and order in our country," Trump says. #debatenight https://t.co/VWd6nFN5lO

Trump said the violence in cities like Chicago can be solved with more “law and order.”

“We need law and order in our country,” Trump said.

Trump said police officers should remove firearms from people who should not have them.

“We have to take these guns away from people who shouldn’t have them, who are bad people,” Trump said.

Trump supported the idea of banning people on the FBI’s terrorist watch list from purchasing firearms.

"Stop-and-frisk had a tremendous impact on the safety of NYC," Trump claims. #debatenight https://t.co/yRX4VwVdDm

“We have a situation where we have inner cities, African-Americans, Hispanics are living in hell because it’s so dangerous,” Trump said.

Clinton said it is “really unfortunate that he paints such a dire, negative picture of black communities in our country.”

She added that stop-and-frisk was “demonstrated to not work.”

Donald Trump on President Obama: "I got him to give the birth certificate" https://t.co/o0Dfw9wjOL #DebateNight https://t.co/MwbG3nYJl4

Holt asked Trump to explain why he kept pressing questions about President Obama’s birth place, even after the president produced his birth certificate proving he was born in Hawaii.

Trump cited the news organization McClatchy and claimed credit for getting Obama to release his birth certificate.

“I was the one who got him to produce the birth certificate and I think I did a good job,” he said.

Holt asked Trump what he has to say to African Americans on the issue.

“I say nothing,” he said, reiterating he’s developed strong relations with the community.

Clinton says Trump "has really started his political activity based on this racist lie." #debatenight https://t.co/csnogA5m6Y

Clinton responded by saying that Trump’s campaign was founded “on a racist lie.”

She went on to reference a 1973 Justice Department lawsuit brought against Trump for housing discrimination. “He has a long record of engaging in racist behavior,” she said.

Trump says DNC hack could be from Russia, China or "somebody sitting on their bed that weighs 400 pounds.” https://t.co/Q4sQWfS1wN

Clinton said Trump has been “very praiseworthy” of Russian President Vladimir Putin and said things to undermine America’s national security. “That’s why I was so shocked when Donald publicly invited Putin to hack into Americans,” she said.

Trump responded by citing endorsements from admirals and the agency that represents border patrol agents.

Trump raised questions over the suggestion that Russia was behind a hack of Democratic National Committee emails.

Clinton outlined her plan to defeat ISIS, including to prevent online recruiting, supporting airstrikes in Syria and Iraq.

Clinton went on to say that Trump supported the invasion of Iraq. However, the Republican nominee interjected: “wrong, wrong.”

Will You Accept a Loss in November?

The final question was whether the candidates will accept a loss in the election.

“I support our democracy. And times you win, sometimes you lose. But I certainly will support the outcome of this election,” Clinton said.

Trump said he will accept the outcome of the general election if Clinton defeats him.

“If she wins, I will absolutely support her,” Trump said.

Prediction Markets Score it a Win for Clinton

Clinton’s odds of winning the election at Predictwise, which aggregates data from betting markets, moved from 69 percent before the debate to 73 percent in the hour after it ended.

During the debate Trump’s betting odds plunged from 39 to 31 percent, according to PredictIt.

Lots of fun watching #debatenight markets tonight! Lots of movement today, but HillaryClinton has a 70% chance of being #POTUS. #debates pic.twitter.com/ipZWLJ0D9Z

You can say here: https://t.co/rFZYklEsdr

Vote in the poll below on who you think won the debate. 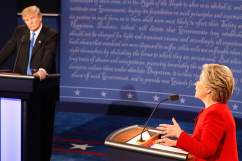