Now that the FBI director has dropped an October surprise – and a hotly criticized one at that – into the 2016 presidential election, some people are wondering: Can you change your early or absentee vote?

Fox News says you can change your early or absentee vote in at least eight states: Wisconsin, Minnesota, New York, Connecticut, Louisiana, Hawaii, Pennsylvania, and Michigan. Check with your local election officials. Here’s a searchable directory. However, the Louisiana Secretary of State said the Fox News account was not accurate regarding Louisiana.

In a few other states, it wasn’t clear, so there could be more, said Fox News’ Trace Gallagher. According to Fox and Gallagher, in Minnesota, Hawaii and Connecticut, you have until November 1 to change your early vote. In Pennsylvania, you can cancel your ballot any time. In New York, you can request a new absentee ballot up until the day before the election, added Gallagher. In Wisconsin, you can change your vote three times.

Trump tweeted that you can change your vote in six states (he didn’t name them), and urged voters to do so.

In most states, you can’t change your vote once it’s cast, though.

More than 12.6 million Americans had already early voted as of October 29, and the number of Americans casting early ballots (by mail or in person) is up sharply. The early voting returns in some key battleground states are showing signs of strength for Hillary Clinton because Democrats are early voting in higher percentages than they did in the previous presidential election.

However, that was before FBI Director James Comey deviated from past practice and sent a letter to Congress in which he said the FBI was investigating newly recovered emails to see if they bore significance to the Clinton private server email investigation. Comey overruled objection from Attorney General Loretta Lynch in releasing the letter. Clinton has demanded that he release more details.

There’s been a recent spike in Google searches for terms relating to changing your early vote, according to Google Trends.

Different states have different nuances to their rules. Some terminology differs between “early vote” and “absentee vote” and whether they are interchangeable, and some states have strict rules about who can vote before the election.

Fox 43 says that Pennsylvania voters can change their early vote (absentee ballots), but they have to physically go to the polls to do it.

In Wisconsin, election laws give voters “up to three chances to correct their ballot before it’s officially cast.”

Reported WISN-TV Milwaukee: “Early voting is in full swing in Wisconsin, and those early voters can change their vote up to three times.”

“Wisconsin state law actually allows a person to change their mind and vote a new ballot if they have submitted an absentee ballot,” Neil Albrecht, the executive director of the Milwaukee Election Commission, told WISN-TV.

The Oshkosh, Wisconsin clerk told WBAY, “All the ballots are secured in the vault at city hall. We would pull that from the group. We would let the individual, the voter, vote again and document that this was their second ballot issued. We’d keep a record of that, so they would only have up to three opportunities.”

Voters have until November 4 to revote in Wisconsin, said the television station.

According to Fox and Friends, “Voters in Minnesota and Wisconsin have the option of changing their vote if they cast their ballots early or as absentees.”

The network says that election officials report some voters have been changing their minds.

In Michigan, there are strict rules for absentee voting (you have to be 60 and over or out of town, for example) and, unlike some states with early voting, the votes are not counted right away, meaning voters “have the opportunity to change their vote if they change their mind in the days leading up to the election,” she said to the Detroit News. Michigan technically considers these absentee ballots not “early voting” since the process is not open to all.

In Colorado, once a clerk has received your ballot, you can not change it. But if you’ve marked it, but not returned it yet, you can request a new ballot.

See different pathways for each candidate here for electoral college victory here. The breakdowns show how formidable the math is for Trump even with the tightening in the polls. 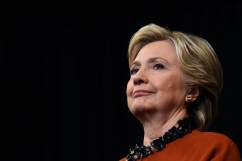